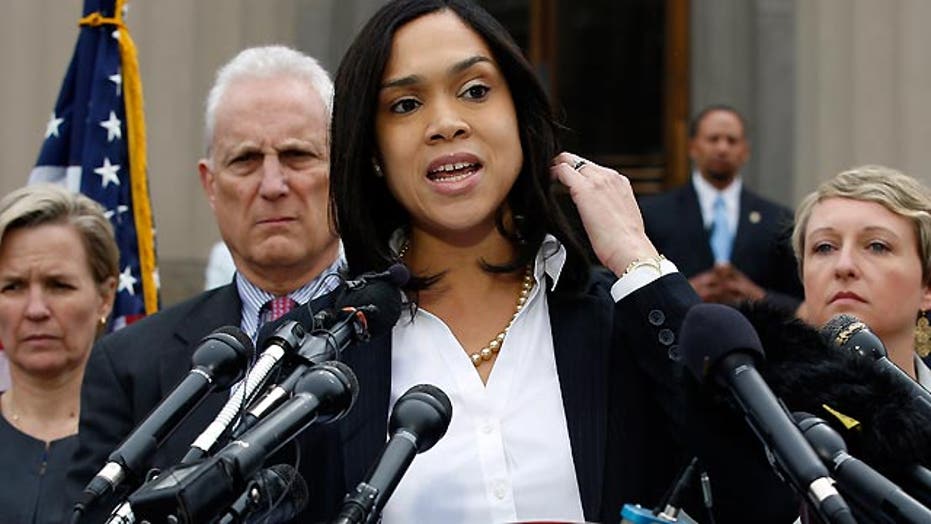 Freddie Gray charges: How strong is case against police?

One Baltimore police officer was charged Friday with murder, three with manslaughter and two with assault in the death of Freddie Gray, who a prosecutor said suffered a broken neck last month when he was left shackled at the feet and lying face down in a police van by officers who ignored his pleas as they made their rounds.

The death of Gray, 25, on April 19 of injuries suffered a week earlier touched off peaceful protests that degenerated into a night of rioting, looting and chaos Monday. On Friday, a crowd gathered around State's Attorney for Baltimore Marilyn Mosby cheered as she said the police involved would be brought to justice in the incident. Mosby said the police had no basis for arresting Gray, and described a harrowing ride in a van driven by Police Officer Caesar Goodson, 45, who was charged with the most serious crimes, including second-degree murder.

"No one is above the law," declared Mosby, who said she comes from five generations of law enforcement and has been on the job for four months. Her husband is Baltimore City Councilman Nick Mosby, who has spoken out about the riots and anger in the city's African-American community.

At a late afternoon press conference Friday, a man named Richard who said he was "one of Freddie's two fathers" said the family was "satisfied with today's charges."

He then appealed for peace, saying, "without justice there is no peace but let us have peace in the pursuit of justice."

All six officers were reported in custody by Friday afternoon.

Before the charges were announced, the Baltimore police union president told Mosby in a letter that none of the six officers were responsible for Gray's death.

The union requested a special prosecutor in the case, saying Mosby had conflicts of interest including a friendship with the Gray family's lawyer, Billy Murphy, who contributed to her campaign. Murphy was among Mosby's biggest campaign contributors last year, donating the maximum individual amount allowed, $4,000, in June. Murphy also served on Mosby's transition team after the election.

Gray suffered a broken neck, apparently while riding in the back of the Baltimore police van. While Mosby said Friday the medical examiner had ruled the death a homicide, police sources have said his injuries may have been caused by his head hitting a bolt inside the vehicle, according to local reports.

The officers and charges in the case include:

- Goodson was charged with second-degree depraved-heart murder, involuntary manslaughter, second-degree negligent assault, as well as other charges including failure to render aid and misconduct in office.

- Police officers Edward Nero, 29, and Garrett Miller, 26, were charged with multiple counts of assault, false imprisonment and misconduct in office.

Five of the six officers charged were in custody Friday afternoon, according to Baltimore Mayor Stephanie Ralwings-Blake. The officers facing felony charges have been suspended without pay.

Mosby said her office’s police integrity unit began investigating the case the day after Gray’s arrest and interviewed dozens of witnesses and reviewed video, police statements and medical records as well as canvassed "the community and the family of Mr. Gray."

She said her probe found the police officers, part of a bike patrol led by Rice, made eye contact with Gray, who has a rap sheet that includes several drug arrests. Gray ran from police, prompting the officers to chase after him, Mosby said. Gray surrendered a short time later and was handcuffed with his arms behind his back, she said.

"It was at this time that Mr. Gray indicated that he could not breathe and requested an inhaler, to no avail," said Mosby, who also said the knife Gray was carrying clipped to the inside of his pants was not a switchblade and was not illegal.

Police held Gray on the sidewalk until Goodson arrived driving the van, Mosby said. Goodson, Rice, Nero and Miller loaded him into the van, she said, but did not secure him with a seatbelt, a policy that had been put in place department wide nine days earlier.

Moments later, Rice ordered Goodson to pull over and the officers took Gray back out of the van. The shackled Gray's legs, filled out paperwork and put him back in, placing him on his stomach on the floor of the vehicle, Mosby said. It was after that, she said, that Gray suffered his injuries. Mosby said Gray was injured "as a result of being handcuffed, shackled by his feet and unrestrained inside" the wagon.

Mosby said the police stopped at least one more time to observe Gray, but did not immediately request medical assistance for him despite his pleas. She said Goodson drove the vehicle to pick up another arrested suspect blocks away, rather than taking Gray immediately for medical help.

White, who had been sent to investigate citizens' complaints about Gray's initial arrest, looked in on him as he lay face down in the back of the van, Mosby said, but did nothing to help him.

"She made no effort to look or assess or determine his condition," Mosby charged.

By the time the van arrived at the police station, according to Mosby, Gray was not breathing and had gone into cardiac arrest. He was then rushed to a trauma center run by the University of Maryland where he underwent surgery and later died, she said.

Gray died a week later, on April 19. Until Friday's news conference few details about the investigation had been publicly released and most of what was known came from local reports citing unnamed sources. An explosive report Wednesday night in the Washington Post cited a fellow passenger's account in a police affidavit that said Gray was thrashing around in an effort to injure himself, although that witness went on the city's CBS affiliate to say his words were taken out of context and that he now fears for his life after his statement was used to bolster the police version of events.

"When I was in the back of that van it did not stop or nothing," Danta Allen, who had been arrested for allegedly stealing a cigarette, told WJZ. "All it did was go straight to the station, but I heard a little banging, like he was banging his head," Allen said. "I didn’t even know he was in the van until we got to the station."

Gray's lawyer has said his spine was nearly severed, but results of an autopsy, like the police report, remained under wraps. That has fueled frustration and suspicion in the community, where peaceful protests devolved into rioting and looting, culminating in a night of chaos on Monday.

The Gray family's lawyers said they want the process to play out, and urged calm.

"This family wants justice, and they want justice that comes at the right time and not too soon," attorney Hassan Murphy said Wednesday.

Meanwhile, protesters over Gray’s death continue to spread across the nation. Aside from gatherings in Baltimore, demonstrations spread to Philadelphia and New York Thursday.

Philly.com reports Philadelphia police made three or four arrests after hundreds of protesters marched through the city to show support for Gray.

More demonstrations are planned through the weekend.