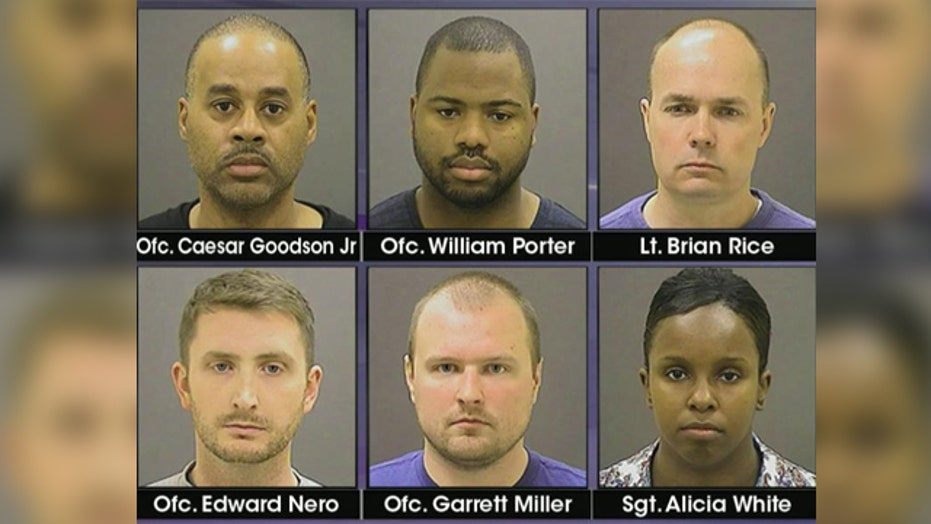 Baltimore cops to be tried separately in Freddie Gray case

BALTIMORE – A city board Wednesday approved a $6.4 million settlement with the family of Freddie Gray, a 25-year-old black man who died a week after he was critically injured while in police custody.

The settlement, announced Tuesday, could play a role in whether a judge decides to move the trials for the six officers charged in Gray's death out of the city.

Mayor Stephanie Rawlings-Blake and other members of the Board of Estimates voted unanimously to approve the settlement Wednesday morning, just a day before Judge Barry Williams will hear arguments on whether the trials should be moved to a different jurisdiction. Defense attorneys have asked for a change of venue, citing pre-trial publicity and concern that the officers will not receive fair trials if they are tried in Baltimore.

The settlement appears to be among the largest such payments in police death cases in recent years. It was reached before Gray's parents and his estate filed a lawsuit, although they had filed claims with the city and its police department.

Although the city said in a statement that the settlement does not resolve any factual disputes, and expressly does not constitute an admission of liability on the part of the city, its police department or any of the officers, experts say the city's willingness to pre-empt a lawsuit could have an effect on the officers' ability to receive an impartial trial in Baltimore — an issue Williams will likely decide Thursday.

"Damages would have been paid if the city went to trial and they're willing to settle it. But they tell us it's by no way an admission of fault by the police officers," said David Harris, a law professor at the University of Pittsburgh. "There's no doubt that this will figure in to the hearing for change of venue. If I was an attorney for a defendant I'd be revising my motion right now to say the settlement was made to persuade the jury pool that the officers did something wrong."

Douglas Colbert, a professor at the University of Maryland Francis King Carey Law School, said the settlement is a step in restoring the public's faith in local government and mending the relationship between the citizens of Baltimore and elected officials.

"It's a big step toward a different type of policing," Colbert said, "and a relationship with the community that deters misconduct."

An agenda for the board Wednesday described the city's goal in settling the claim.

"The purpose of the civil settlement is to bring an important measure of closure to the family, the community and the city and to avoid years of protracted civil litigation and potential harm to the community and divisiveness with may likely result."

In July, New York City settled for $5.9 million with the family of Eric Garner, an unarmed black man who died after being put in a white police officer's chokehold. The city of Chicago settled in 2001 a wrongful death lawsuit by the family of LaTanya Haggerty, a black woman who was shot to death by a police officer who thought her cellphone was a weapon, for $18 million.

But Eugene O'Donnell, a professor at John Jay College of Criminal Justice, said such settlements are damaging for communities and self-serving for governments. By paying off family members, O'Donnell said, cities can prevent real scrutiny of political and social ills that allowed misconduct to occur.

"It's all too easy to take public money and hand it over to people and say, 'Well, this is a big aberrational mistake and we're going to make it good,' and it generally absolves the policymakers and the people in power of responsibility, when in fact the mistakes are systemic and reflective of a lack of leadership," he said.

The head of Baltimore's police union condemned the agreement.

"To suggest that there is any reason to settle prior to the adjudication of the pending criminal cases is obscene and without regard to the fiduciary responsibility owed to the taxpaying citizens of the city," Lt. Gene Ryan said in a statement.