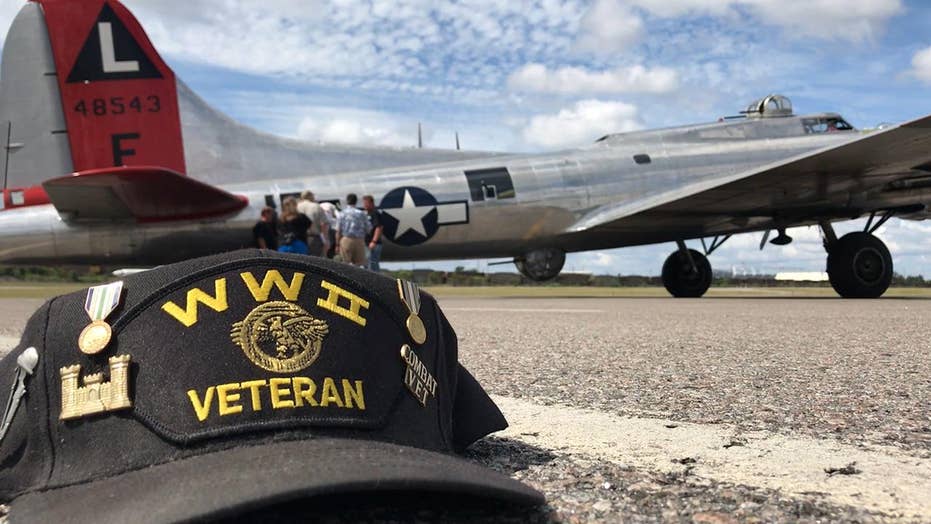 Volunteers with the Liberty Foundation spend countless hours maintaining and flying one of the last B-17's manufactured during World War II. Dubbed 'the flying fortress' the now 'flying museum' gives 30-minute flight tours to veterans and family members of those who served.

Volunteers with a passion for aviation are spending countless hours maintaining and flying one of the last Boeing B-17’s manufactured during World War II as a part of their Salute to Veterans tour across the United States.

The flying museum, better known as the “Madras Maiden” touched down in Columbia, S.C. Sunday, where volunteers give 30-minute tours to veterans, visitors or families of those who served in the military.

“They do fine…I’m proud of them. [They’re] down in that plane like they were born in it,” WWII Army veteran William Pate said about the volunteers.

“I enjoyed what I was doing. If I could, I would do it again. But I have a lot of age on me now. I ain’t no spring chicken,” he told Fox News.

Pate and other veterans in attendance swapped war stories with each other and the crew after taking one of the flights over the city.

“It’s just an honor to be able to hear their stories, talk to their families and just keep their memories alive for generations,” Rodney Schneider said.

An aircraft maintainer by trade, Schneider explained his love for planes stretched back to his childhood. This motivated him to reach out to the Liberty Foundation, which organizes the event.

“I’ve been with the airplane now seven-days straight. Sometimes its weeks between when I’m needed," Schneider said.

Robert “Max” Maiden, 21, is a co-pilot for the bomber. He flies to different cities every weekend for six months.

“I’ve always loved flying old airplanes…They have a cool story to tell and they are an important part of history,” Maiden said. “You really see people get really emotional and they sit there and they go, 'Aww man this is what my dad did,' or ‘my dad built them’ or 'my dad flew them or is a gunner.' It’s really cool to share that with people.”

Erin Creed traveled to Columbia from Virginia with her father and husband to honor her grandfather, who fought the Nazis in Europe.

Erin Creed holds a photo of her Grandfather Dan Creed who fought in Europe during WWII. Columbia, S.C. (Fox News)

“I just could not believe I was on a World War Two plane,” she said. “I had his picture and his favorite hat and I just couldn’t believe [I] was flying in memory of him.”

One of only 12 B-17’s still flying the “Madras Maiden” was built toward the end of the war but never saw combat. In 2016, The Liberty Foundation began operating the aircraft and spends over a million dollars every year for upkeep. The money that is generated from ticket sales or donations helps to cover the costs.

“If that goes away, it goes back into a museum and starts collecting dust and you don’t get to hear it or smell it,” Schneider explained.

The crew’s age and skills may vary, but one thing remains the same -- the love for planes and veterans.

“We get to ride on a WWII airplane that not everybody can do and just the satisfaction of just doing it,” Schneider said.

As a part of its tour across the U.S. the plane is scheduled to make stops in Tennessee and Kentucky.