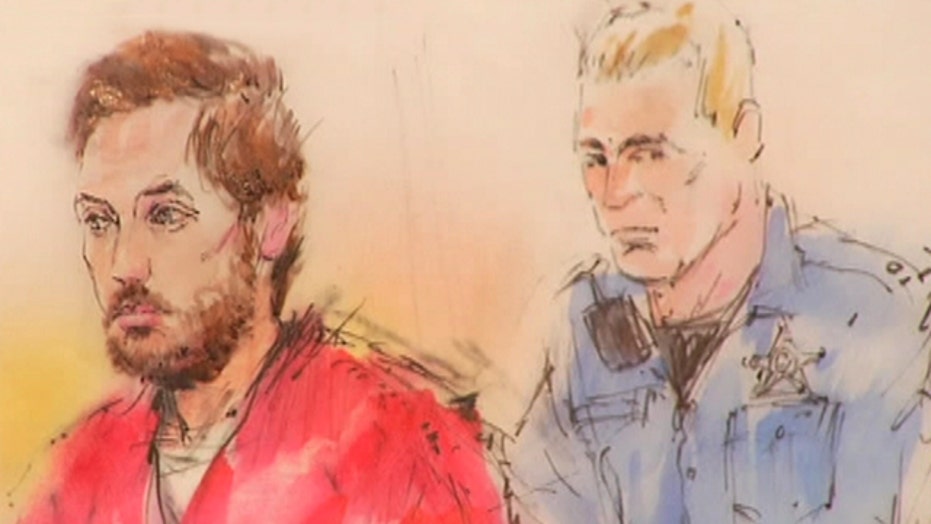 James Holmes, wearing a red jumpsuit Tuesday on a second day of testimony, stared straight ahead as authorities recounted the initial 911 calls reporting the movie theater massacre in Aurora, Colo. -- and then described how the defendant allegedly planned to carry out an even bigger slaughter with an elaborate system of booby traps.

Detective Randy Hansen of the Aurora Police Department testified that dispatchers received 41 separate 911 calls within the first 10 minutes of the shooting that left 12 dead, and wounded dozens more.

The courtroom heard the first phone call to come from inside the theater during the actual shooting. Hansen told prosecutors he counted at least 30 shots fired during the 27 second phone call.

FBI bomb technician Garret Gumbinner then described an elaborate booby trap system allegedly set up to pull police away from the Colorado theater shooting. It included improvised napalm and thermite, which burns so hot that water can't put out the blaze.

Gumbinner said three different ignition systems were found in Holmes' apartment. There was a thermos full of glycerin leaning over a skillet full of another chemical. Flames and sparks are created when they mix. A trip wire linked the thermos to the door.

Police say Holmes hoped a boom box on a timer would lure someone to the apartment.

The testimony came Tuesday as prosecutors try to show that Holmes should face a trial for the July 20 attack. He faces more than 160 felony charges for allegedly killing 12 and injuring 70.

Defense attorneys say Holmes is mentally ill, and have used their questions to try to make that point. They haven't elaborated but plan to call at least two witnesses later in the week who could discuss Holmes' mental health.

ATF supervisor Steve Beggs testified that prior to the shooting Holmes had purchased 6,295 rounds of ammunition.

He dyed his hair bright orange, then bought a scope and plastic bullets on July 1, the visit and the new hair color documented in security video.

Finally, he purchased glycerin and potassium permanganate -- chemicals that could combine to create fire and sparks -- from a Denver science store. At some point, he also improvised napalm, as well as thermite, a substance which burns so hot that water can't extinguish the blaze.

But a description of Holmes after the attack, given by police detective Craig Appel, seemed to undercut prosecutors' attempts to show Holmes as methodical.

As Appel interviewed the suspect they'd picked up outside the theater, he started pretending the paper bags on his hands -- meant to preserve gunshot residue -- were puppets.

The former neuroscience graduate student tried to jam a staple into an electrical outlet, and he played with a cup on the table, Appel said. At least two officers noted that his eyes were dilated.

On Monday, Aurora police officers gave detailed accounts of the grim scene after 25-year-old Holmes allegedly opened fire during a July rampage at the packed theater.

The hearing is to determine whether Holmes will stand trial for the shooting.

Prosecutors have suggested that Holmes launched his rampage at the midnight showing of “The Dark Knight Rises” after flunking out of a neuroscience graduate program. Defense attorneys have said he is mentally ill.

Legal analysts say the hearing could set the stage for a negotiated plea agreement by giving each side a better understanding of the other’s case. Relatives and victims are hoping for an explanation for the rampage.

Holmes showed little emotion Monday as officers struggled to hold back tears during their testimony about the scene.

“After I saw what I saw in the theater – horrific – I didn’t want anyone else to die,” Officer Justin Grizzle testified.

Holmes watched intently as one detective showed a surveillance video of him calmly entering the theater lobby, holding the door open for a couple behind him, and printing out tickets to the movie nearly two weeks ahead of time. The court did not see video of the attack.

Officers who found Holmes standing next to his car mistakenly thought he was a police officer because of how he was dressed, but quickly realized he was just standing there and not rushing to help.

Grizzle testified that after asking Holmes if anyone had helped him, Holmes, “just looked at me and smiled … like a smirk.”

While prosecutors have yet to decide on whether they will seek the death penalty, such a plea could get Holmes a lesser sentence, such as life in prison; help the state avoid a costly trial; and spare survivors and families of those who died from the trauma of going through a lengthy trial.

Fox News' Jennifer Girdon and the Associated Press contributed to this report.