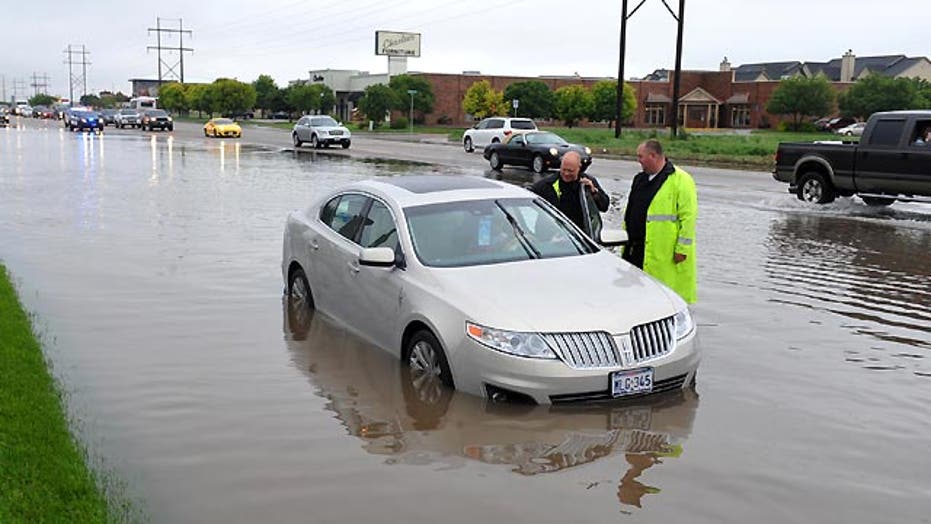 Widespread flooding caused by heavy rains in Texas and Oklahoma left 17 dead and 40 missing or unaccounted for, in addition to more than 4,000 damaged properties and 2,500 abandoned vehicles in the Houston area alone, Mayor Annise Parker said Tuesday afternoon.

Texas Gov. Greg Abbott said in an afternoon press conference that the disaster declarations in the state stretch from "literally the Red River to the Rio Grande."

The Associated Press reported twelve of the deaths occurred in Texas, and five in Oklahoma.

Storms dumped record rainfall on the Plains and Midwest, caused major flooding and spawned tornadoes, including one twister that killed 13 people in the Mexican border city of Ciudad Acuna, the Associated Press reported.

The water continued rising overnight as about 11 more inches of rain fell, much of it in a six-hour period.

The floodwaters affected virtually every part of Houston and paralyzed some areas. Firefighters carried out more than 500 water rescues, most involving stranded motorists. At least 2,500 vehicles were abandoned by drivers seeking higher ground, officials said.

"Given the magnitude and how quickly it happened, in such a short period of time, I 've never seen this before," said Rick Flanagan, Houston's emergency management coordinator.

In the Houston area, authorities located two bodies Tuesday after powerful storms rolled through the area, The Houston Chronicle reported. It is believed the two drowned in the flooding in the area. Authorities urged Houston residents to avoid all travel, and CenterPoint Energy reported that over 70,000 customers in the Houston area were without power.

At an afternoon press conference, Mayor Annise Parker confirmed three of the dead were from the Houston area.

Parker said Houston city officials will be vigilant as the area's waterways swell with several inches of rain.

Recovery teams also continued their search Tuesday for 8 people who went missing after a rain-swollen river in Central Texas carried a vacation home off its foundation, slamming it into a bridge downstream.

The fate of those who were inside the home was still unclear. Recovery teams were to resume looking for as many as a dozen people who may have been staying at the two-story house in this small town in the Texas Hill Country, where punishing rains and other severe weather have destroyed or damaged more than 1,000 homes.

The National Weather Service says about 11 inches of rain fell in six hours in parts of southwest Houston. Firefighters reportedly responded to 131 water rescues in the area after the storms hit. The paper reported that motorists abandoned their cars throughout the city.

Meteorologists say storms that have been virtually parked over Texas for weeks are not yet done, raising the prospect of even more flooding.

"You cannot candy coat it. It's absolutely massive," Abbott said after touring the destruction.

Trey Hatt, spokesman for the Hays County Emergency Operations Center, which is outside Austin, said Monday "the search component is over," meaning that no more survivors are expected to be found in the area's flood debris. Hatt said recovery operations are expected to begin Tuesday.

Witnesses reported seeing the swollen Blanco River push the vacation house off its foundation and smash it into a bridge. Only pieces of the home have been found, Hays County Judge Bert Cobb told the Associated Press.

One person who was rescued from the home told workers that the other 12 inside were all connected to two families, Cobb said. KTBC reported that eight of the missing had traveled to the area from Corpus Christi.

The house was in Wimberley Valley, an area known for its bed-and-breakfast inns and weekend rental cottages approximately 30 miles southwest of Austin. In Bastrop County, southeast of the state capital, water from the Colorado River breached a dam at Bastrop State Park.

Photos from the scene showed cars with their hoods torn off, resting upended against single-story houses. One car's frame was bent around the gate of a house. A bus was seen flipped and crumpled on a roadway.

The storms pushed their way east to Arkansas and Louisiana by Monday evening. A tornado touched down in North Little Rock but resulted in minimal damage, ArkansasOnline.com reported.

The Times-Picayune in New Orleans reported that thousands of residents were without power after Monday's storms. Entergy, a major energy supplier in the city, reported 37,000 customers without power. Power is expected to be restored by 4 p.m. Tuesday, the report said.

The Austin American-Statesman reported that emergency responders had been required to make several water rescues, all of which were successful. An exact number of rescues was not immediately made available, nor was it immediately clear whether there were any injuries.

The flooding is the result of storms that have been blamed for at least 11 deaths over the long holiday weekend in the U.S., with three in Oklahoma and six in Texas. A man's body was recovered from a flooded area along the Blanco River, which rose 26 feet in an hour and created huge piles of debris. Another man was confirmed dead Monday when a tornado destroyed four homes in a subdivision outside the city of Cameron, approximately 60 miles northeast of Austin. Milam County Judge Dave Barkemeyer told the Associated Press the man died when his mobile home was destroyed at  about 4 p.m. local time Monday. Four other people were injured.

In Mexico, at least 14 people were killed when a tornado ripped through the city of Ciudad Acuna, Mexico, a city of 125,000 on the border with the U.S. Three infants were among those confirmed dead, while four others were unaccounted for.

Officials said Tuesday that the body of a baby ripped from its mother's hands was found. City government spokesman Edgar Gonzalez had no additional details on the baby, who was in a carrier. The twister hit a seven-block area shortly after daybreak Monday, around the time buses were preparing to take children to school.

Mayor Evaristo Perez Rivera said 300 people were being treated at local hospitals, and up to 200 homes had been completely destroyed.

"There's nothing standing, not walls, not roofs," said Edgar Gonzalez, a spokesman for the city government, describing some of the destroyed homes in a 1 square mile stretch.

Family members and neighbors gathered around a pickup truck where the bodies of a woman and two children were laid out in the truck's bed, covered with sheets. Two relatives reached down to touch the bodies, covered their eyes and wept.