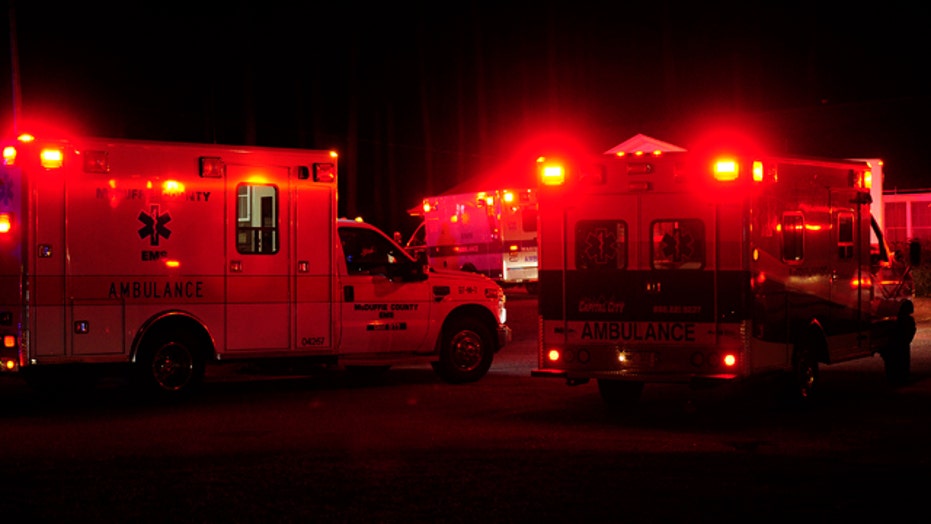 Federal and local authorities were investigating Thursday after a small jet crashed off the end of a runway at a Georgia airport, killing five people and injuring two.

The plane overran a runway during its landing and crashed into woods at the airport west of Augusta, the National Transportation Safety Board said in a statement Thursday morning.

One of the survivors, a man, was in critical condition at Georgia Regents Medical Center in Augusta, hospital spokeswoman Christen Carter said Thursday.

Where the other injured person was taken, as well as that person's condition, were not immediately known.

The National Transportation Safety Board said in a statement that it will launch an investigation into the crash that will be headed by Ralph Hicks, a senior aviation investigator.

The identities of those killed were being withheld until family members were notified, the sheriff said.

Five of those on board are affiliated with a vein clinic in Augusta that also has offices in Tennessee, said Dr. Stephen Davis, a plastic surgeon who works for the Vein Guys clinic in Nashville. Davis said those on board were: Dr. Steven Roth, two ultrasound technicians, a nurse anesthetist and a secretary. He said Roth regularly flew to Vein Guys clinics in the region, though other doctors working for the clinic did not travel.

It was not immediately known if any of them were among the two survivors. Davis said his brother Dr. Keith Davis and Roth co-founded the clinic in Augusta. He described Roth as "a great guy, a great doctor, devoted to patients and his family."

The plane with seven people aboard had departed from John Tune Airport in Nashville, Tenn., Federal Aviation Administration spokeswoman Kathleen Bergen said. It crashed at Thomson-McDuffie Regional Airport, about 30 miles west of Augusta, she said.

Bodies of the five people who died have been taken to a Georgia Bureau of Investigation lab in Decatur for autopsies, GBI spokesman John Bankhead said Thursday.

Assistant County Fire Chief Stephen Sewell told the Augusta Chronicle that the two survivors were a pilot and a passenger. But he provided no additional information about those aboard.

A brush fire flared near the crash scene, and witnesses reported power outages that prompted a utility to send workers to the site, the newspaper reported.