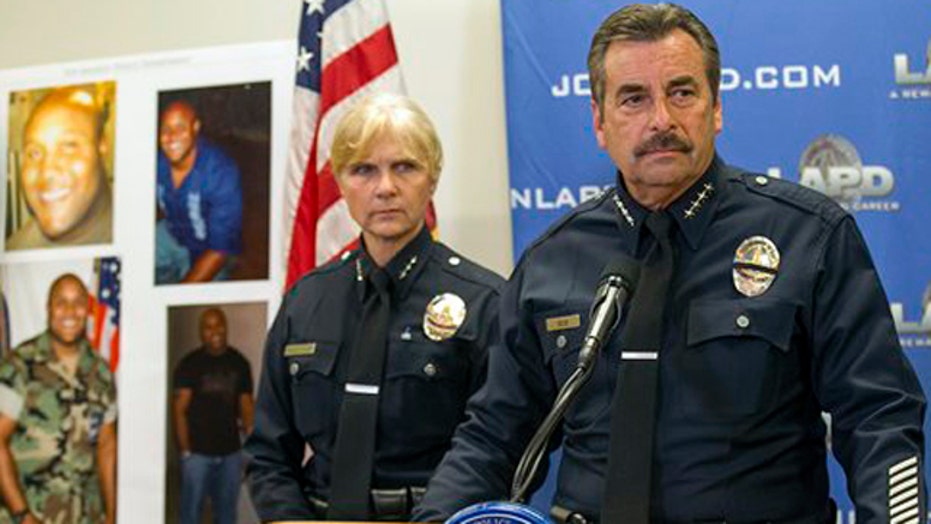 Seeking leads as the massive manhunt for Christopher Dorner -- the former Los Angeles police officer suspected in three killings -- progressed into its fourth day, authorities on Sunday announced a $1 million reward for information leading to his arrest.

Villaraigosa called Dorner's actions a "reign of terror," but expressed confidence that he would be brought to justice.

Reports of a possible sighting of the suspect in Northridge, Calif. prompted police to investigate the scene at a Lowe's hardware store on Sunday evening.

And LAPD Chief Charlie Beck urged the public to submit information to authorities to decrease the chances of Dorner making another possible attack.

Meanwhile, authorities said camping gear was found along with weapons inside Dorner's burned-out pickup truck. The vehicle found Thursday in the ski resort town of Big Bear Lake was so charred that investigators couldn't be more specific about the nature of its contents, Lopez said.

Also Sunday, police investigated a taunting phone call that may have been made by Dorner to the father of the woman they believe he killed last week. Two law enforcement officers who requested anonymity because of the ongoing investigation told The Associated Press they are trying to determine if the call days after the killing was made by the 33-year-old fugitive or a man posing as him.

SWAT teams with air support and bloodhounds fanned out for the fourth day to search for Dorner, who has vowed revenge against several former LAPD colleagues whom he blames for ending his career.

The effort was significantly scaled back as the weekend went on, with 25 officers and a single helicopter looking for clues in the forest and going door-to-door at some 600 cabins in the San Bernardino mountains, about 80 miles northeast of downtown Los Angeles.

On Saturday, Chief Beck said officials would re-examine the allegations by Dorner that his law enforcement career was undone by racist colleagues. While he promised to hear out Dorner if he surrenders, Beck stressed that he was ordering a review of his 2007 case because he takes the allegation of racism in his department seriously.

"I do this not to appease a murderer. I do it to reassure the public that their police department is transparent and fair in all the things we do," the chief said in a statement.

Authorities suspect Dorner in a series of attacks in Southern California over the past week that have left three people dead. The killings and threats that Dorner allegedly made in an online rant have led police to provide protection to 50 families, Beck said.

A captain who was named a target in the manifesto posted on Facebook told the Orange County Register he has not stepped outside his house since he learned of the threat.

"From what I've seen of (Dorner's) actions, he feels he can make allegations for injustice and justify killing people and that's not reasonable," said Capt. Phil Tingirides, who chaired a board that stripped Dorner of his badge. "The end never justifies the means."

Also, newly released surveillance video showed Dorner tossing several items into a Dumpster behind an auto parts store in National City on Monday. The store's manager told FOX5 in San Diego that an employee found a magazine full of bullets, a military belt and a military helmet. Majid Yahyai said he and the employee took the items across the street to a police station.

On Friday night, authorities served a search warrant and collected evidence from a Buena Park storage unit as part of their investigation. Irvine police Lt. Julia Engen wouldn't elaborate on the nature of the evidence or say who had rented the unit.

In his online manifesto, Dorner vowed to use "every bit of small arms training, demolition, ordnance and survival training I've been given" to bring "warfare" to the LAPD and its families.

Dorner served in the Navy, earning a rifle marksman ribbon and a pistol expert medal. He was assigned to a naval undersea warfare unit and various aviation training units, according to military records. He took leave from the LAPD for a six-month deployment to Bahrain in 2006 and 2007.

The flight training that he received in the Navy prompted the Transportation Security Administration to issue an alert, warning the general aviation community to be on the lookout for Dorner. The extent of his potential flying skills wasn't known, the bulletin said.

Feb. 1 was his last day with the Navy and also the day CNN's Anderson Cooper received a package that contained a note on it that read, in part, "I never lied." A coin riddled with bullet holes that former Chief William Bratton gave out as a souvenir was also in the package.

Police said it was a sign of planning by Dorner before the killing began.

On Feb. 3, police say Dorner shot and killed a couple in a parking garage at their condominium in Irvine. The woman was the daughter of a retired police captain who had represented Dorner in the disciplinary proceedings that led to his firing.

Dorner wrote in his manifesto that he believed the retired captain had represented the interests of the department over his.

Hours after authorities identified Dorner as a suspect in the double murder, police believe Dorner shot and grazed an LAPD officer in Corona and then used a rifle to ambush two Riverside police officers early Thursday, killing one and seriously wounding the other.

A funeral for one of the slain officers -- Michael Crain, an 11-year department veteran, father and former Marine -- will be held in Riverside on Wednesday.

The crime spree spanned across a wide swath of Southern California, prompting several police agencies, including the FBI and US Marshall Service, to form a joint investigative task force.