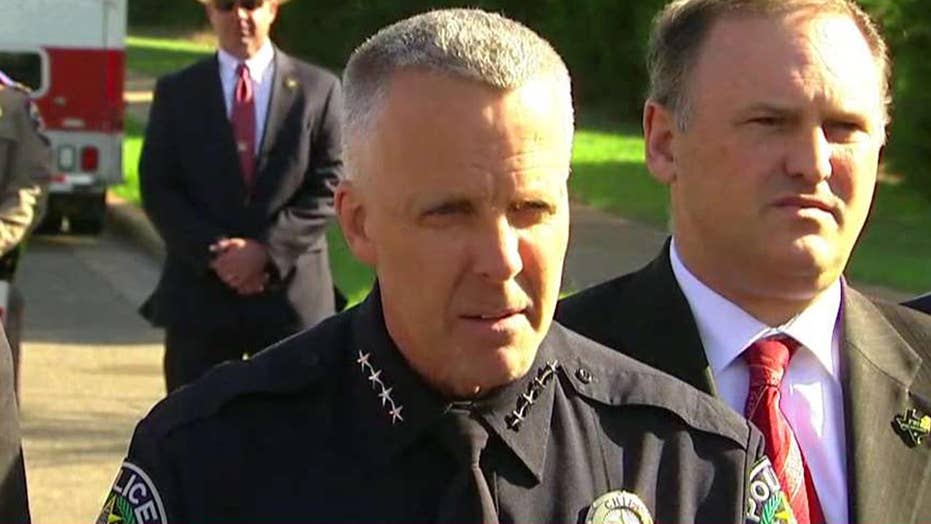 A "serial bomber" is likely responsible for four explosions in Austin this month, the latest of which injured two people Sunday night after they crossed a trip wire possibly made with fishing line, officials disclosed Monday.

Austin Police Chief Brian Manley said at a news conference Monday morning that although the bomb that injured two men on Sunday night was linked to the three previous blasts, the latest bomb involved a trip wire while the previous explosions were package bombs left on people's doorsteps.

"We've seen a change in the method this suspect is using," he told reporters.

Austin's top cop also called on whoever is behind the string of bombings that have killed two to reach out to police to let them know why they're setting off the explosives. Manley said it's too soon to say whether the blast Sunday night could have been a response to his call a day prior for those behind the bombings to reach out.

Evidence markers can be seen at the site of Sunday's bombing in Austin, Texas. (KENS -TV)

"We are clearly dealing with what we what we expect to be a serial bomber at this point, based on the similarities between now what is the fourth device," he said.

Frederick Milanowski, the special agent in charge for the Bureau of Alcohol, Tobacco and Firearms, says the latest bomb was "more sophisticated" because it used a trip wire. Milanowski said trip wire devices, possibly using fishing line, are triggered by victims applying any kind of pressure or tension.

"We are more concerned now. That is, people see something suspicious they stay away and contact law enforcement," he said.

Report: Latest Austin bomb may have been detonated by a trip wire. Casey Stegall reports from Texas.

The men injured Sunday night in the explosion in the southwestern Austin neighborhood of Travis Country, ages 22 and 23, are white, unlike the victims in the three earlier attacks, who were black or Hispanic. The men on Sunday were walking their bicycles when the explosives detonated, which differs from the first three attacks, which involved package bombs left on people's doorsteps, according to police.

Authorities on Monday were canvassing the area in search of anything suspicious, and residents were warned to remain indoors and to call 911 if they needed to leave their homes before 2 p.m.

Officials work and stage near the site of Sunday's explosion on March 19, 2018, in Austin, Texas. (AP Photo/Eric Gay)

Travis Country is far from the sites of the earlier bombings, which occurred over two-plus weeks in residential neighborhoods east of Interstate 35, which divides the city.

"It's more sophisticated, it's not targeted to individuals," he told reporters. "We're very concerned that with trip wires a child could be walking down the sidewalk and hit something."

A bomb detecting unit walks along a street near the scene of an explosion on March 18. (Nick Wagner/Austin American-Statesman via AP)

Combs said the latest developments should be a warning to residents to not approach any suspicious items, as they may set off something armed with trip wire, and to contact local authorities immediately.

A witness to Sunday's blast speaking to FOX7 described hearing a "loud bang," adding that it was "not a car crash, not gunshots but something terrible."

Thad Holt, 76, who lives near the site of the fourth explosion, told Fox News the neighborhood is "very quiet," with a lot of families.

Authorities work at the scene of an explosion in Austin, Texas on March 18. (Nick Wagner/Austin American-Statesman via AP)

"We were surprised because it all had been concentrated on that side of town, in lower income neighborhoods but this is a real, nice neighborhood, nice homes, everything from retired people to professional people," he said. "It's a pretty crime-free neighborhood."

"We are clearly dealing with what we what we expect to be a serial bomber at this point, based on the similarities between now what is the fourth device."

Holt, who has lived in the neighborhood for almost 18 years, said he had taken a walk with his wife around 7:30 p.m. and walked right past the area where the explosion occurred about 15 minutes later.

A map shows the location of each of the four bombings in Austin. (Fox News)

Police said all three of those were likely related and involved packages that had not been mailed or delivered by private carrier but left overnight on doorsteps.

Authorities on Sunday said the reward for information leading to an arrest in the deadly explosions has risen by $50,000 to a new total of $115,000. Manley said more than 500 officers, including federal agents, have conducted 236 interviews in following up 435 leads.