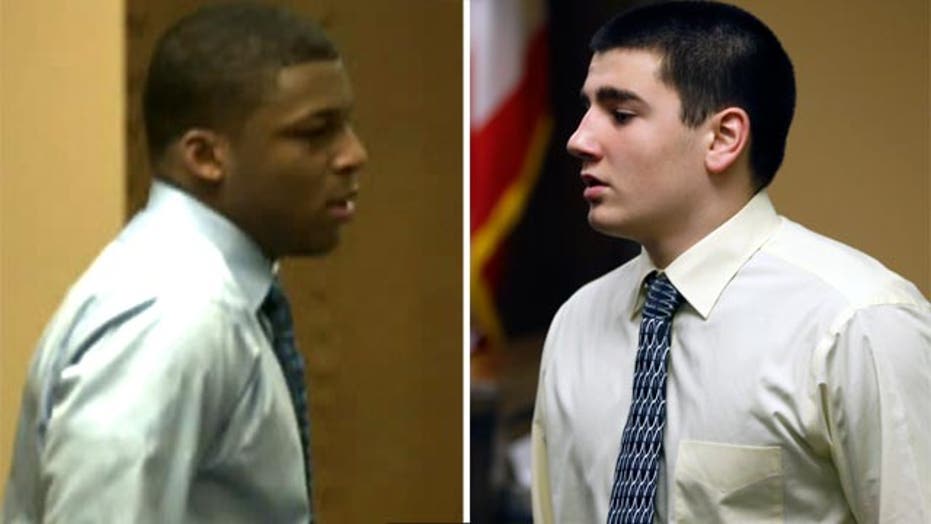 Teens sentenced to at least a year in juvenile prison

Although two Steubenville, Ohio, high school football players were found guilty of raping a drunken 16-year-old girl and were sentenced to juvenile prison terms, the ordeal is far from over, as an attorney general says more charges could be coming.

The announcement of the verdict was barely an hour old Sunday when state Attorney General Mike DeWine said he was continuing his investigation and would consider charges against anyone who failed to speak up after the attack last summer, a group that could include other teens, parents, coaches and school officials.

A grand jury will meet in mid-April to consider evidence gathered by investigators from dozens of interviews, including with the football team's 27 coaches.

Text messages introduced at the trial suggested the head coach was aware of the rape allegation early on. DeWine said coaches are among officials required by state law to report child abuse. The coach and the school district have repeatedly declined to comment.

The attorney general, Ohio's top law enforcement official, also said the rape was not an isolated problem specific to Steubenville. Sexual assaults occur every Friday and Saturday night across the country, DeWine said, calling it "a societal problem."

The 17-year-old and 16-year-old found guilty of rape were sentenced to at least a year in juvenile prison in a case that has rocked this Rust Belt city of 18,000 and led to allegations of a cover-up to protect the Steubenville High team, which has won nine state championships. The 17-year-old was ordered to serve an additional year for photographing the underage girl naked.

They can be held until they turn 21.

The two broke down in tears after a Juvenile Court judge delivered his verdict. They later apologized to the victim and the community, with the 16-year-old struggling to speak through his sobs.

"My life is over," he said as he collapsed in the arms of his lawyer.

The crime, which took place after a party last summer, shocked many in Steubenville because of the seeming callousness with which other students took out their cellphones to record the attack and gossiped about it online. In fact, the case came to light via a barrage of morning-after text messages, social media posts and online photos and video.

"Many of the things we learned during this trial that our children were saying and doing were profane, were ugly," Judge Thomas Lipps said.

The teen boys were charged with penetrating the West Virginia girl with their fingers, first in the back seat of a moving car after a mostly underage drinking party on Aug. 11, and then in the basement of a house.

"They treated her like a toy," prosecutor Marianne Hemmeter said.

Prosecutors argued that the victim was so intoxicated she couldn't consent to sex that night, while the defense contended the girl realized what she was doing and was known to lie.

The girl testified she could not recall what happened but woke up naked in a strange house after drinking at a party.

"It was really scary," she said. "I honestly did not know what to think because I could not remember anything."

She said she believed she was assaulted when she later read text messages among friends and saw a photo of herself naked, along with a video that made fun of her and the alleged attack.

Three other boys, two of them on the football team, saw something happening that night and didn't try to stop it but instead recorded it with their cellphones. Granted immunity to testify, they confirmed the girl was assaulted and said she was so drunk she didn't seem to know what was happening.

Evidence at the trial also included sexually explicit text messages sent by numerous students after the party. Lawyers noted how texts have seemed to replace talking on the phone for young people. A computer forensic expert documented hundreds of thousands of texts found on 17 phones seized during the investigation.

In sentencing the boys, Lipps urged parents and others "to have discussions about how you talk to your friends, how you record things on the social media so prevalent today and how you conduct yourself when drinking is put upon you by your friends."

After the arrests, the case was furiously debated on blogs and social media, with some people warning of conspiracies and conflicts of interest. On Sunday, Hemmeter, the prosecutor, criticized efforts by the hacker collective Anonymous to publicize the case, saying the attention had a chilling effect on those willing to testify.

After the verdict, the accuser's mother rebuked the boys for "lack of any moral code."

"You were your own accuser, through the social media that you chose to publish your criminal conduct on," she said. She added that the case "does not define who my daughter is. She will persevere, grow and move on."

Echoing that, the judge said that "as bad as things have been for all of the children involved in this case, they can all change their lives for the better."

Editors’ Note: The Associated Press named the minors charged due to the fact they have been identified in other news coverage and their names were used in open court. FoxNews.com will not name the defendants.