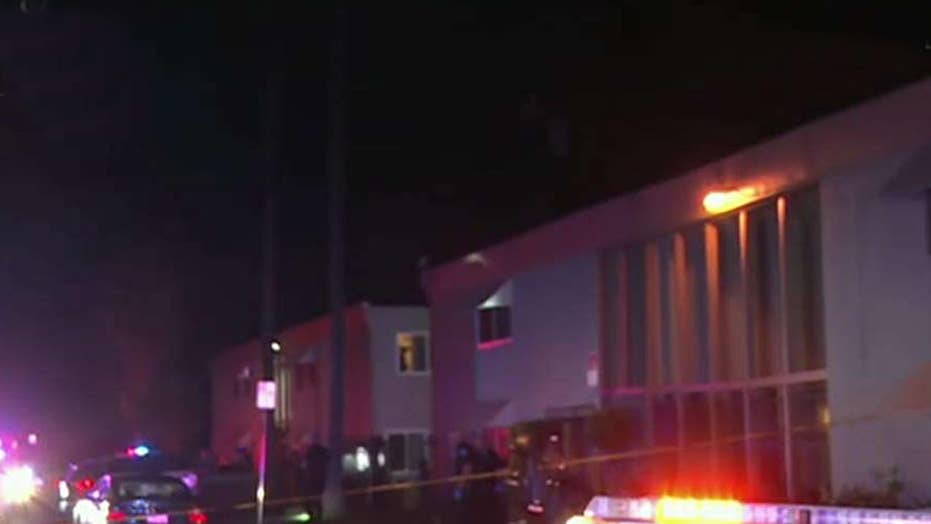 At least 10 injured during the shooting in California.

At least 8 people were shot Sunday night at an apartment complex in San Bernardino, Calif. -- with at least two of the victims reportedly in “extremely critical” condition.

Police originally said 10 people were shot and 3 were in critical condition, but the numbers were updated on Monday morning. Police said the youngest person shot was 17-years-old and in "extremely critical condition," NBC Los Angeles reported.

Police have set up a large perimeter around the crime scene, according to KTVN-TV in Los Angeles.

Multiple handguns and rifles were fired by gunmen who fled the scene, according to Capt. Richard Lawhead of the San Bernardino Police Department.

Officers arrived at the location Sunday night to find an "unruly crowd" at a common area in the apartment complex, Lawhead said. It appeared the crowd of people may have been playing a game of dice when the shooting occurred, the Press-Enterprise reported.

"It was a chaotic scene," Lawhead said.

So far no arrests have been made and there was no immediate description given for any suspects. Lawhead said there was gang activity in the area but it was not immediately clear if that was connected to the shooting.

California Sen. Kamala Harris tweeted about the shooting, sending her thoughts to those affected.

"Heartbroken over the shooting in San Bernardino. Praying for the injured and the entire community. Thank you to law enforcement officers and first responders in the scene," she wrote.