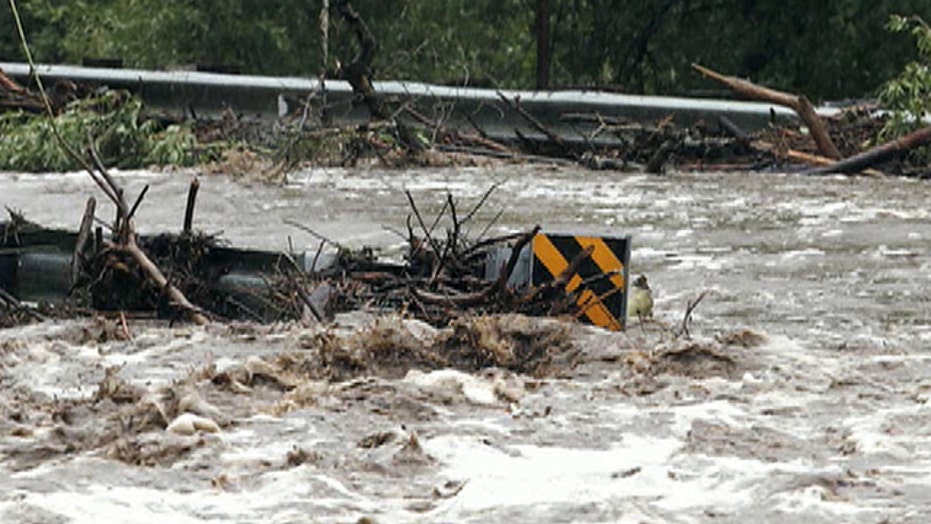 Floodwaters cascaded downstream from the Colorado Rockies on Friday, spilling normally scenic mountain rivers and creeks over their banks and forcing thousands more evacuations in water-logged communities beset by days of steady rain.

The relentless rush of water from higher ground turned whole towns into muddy swamps and threatened to strand hikers and some rural residents into the weekend. In at least one community, pressure from the descending water caused sewer grates to erupt into huge black geysers.

All the while, rain continued to fall, causing flooding across a wide rugged area stretching from Denver to Fort Collins.

The overflowing St. Vrain River cut the town of Longmont in half. Evacuation requests were issued for some neighborhoods, all major roads were closed and several thousand homes and businesses were without power.

"This one's going to bring us to our knees," said Tom Simmons, president and co-owner of Crating Technologies, a packing service that had its warehouse inundated. "It's hoping against hope. We're out of business for a long time."

National Guard troops were working to evacuate more people who had become stranded in Lyons and other communities in the foothills.

About 60 miles of Interstate 25 east of Loveland were closed Friday from north of Denver to Fort Collins because of flooding from the St. Vrain and Big Thompson rivers, transportation officials said.

So far, at least four people have been killed and another was missing. Hundreds more were forced to seek emergency shelter up and down Colorado's heavily populated Front Range, which has received more than 15 inches of rain this week, according to the National Weather Service.

That's about half the amount of precipitation that normally falls in the foothills near Boulder during an entire year.

Boulder County spokesman James Burrus said 17 people were unaccounted for Friday. But, he noted, that doesn't necessarily mean they are missing.

"It means we haven't heard back from them," Burrus said.

Debris and mud coming off the mountainsides had backed up water at the mouth of Boulder Canyon, causing the creek to rise rapidly, authorities said. The creek began to recede after midnight, but the conditions remained dangerous, Police Chief Mark Beckner told the Daily Camera newspaper.

Randy Hicks, the manager of Rocky Mountain Anglers in Boulder, said the city is filled with tree limbs and debris and blue patches of sky are a tease for residents in the area.

"Right now I'm talking to you and the sky has blue patches," he said in a phone interview. "But I look south and to the west, and I see the rain clouds."

"The ground seems like it hit its saturation point," he said. "It's like a sponge that's already filled with water; we can't take anymore."

The entire hamlet of Eldorado Springs, home to about 500 people, was also urged to evacuate because of a flash flood and mudslide threat along South Boulder Creek, Burrus said.

In Fort Collins, neighborhoods along the Cache La Poudre River were evacuated overnight, with the river expected to rise to nearly 2 feet above flood stage Friday, according to the weather service.

The city closed bridges after water began topping Seaman Reservoir in the Poudre Canyon. Residents were warned to stay clear of the river.

South of the historic Red Rocks Amphitheater, Jefferson County deputies went door-to-door in Morrison and Kittridge, asking hundreds of residents to leave their homes as Bear Creek neared flood stage. The amphitheater was in no immediate danger.

In Lyons, residents took shelter on higher ground, including some at an elementary school.

Three convoys rolled out of the isolated town Friday, carrying smiling and waving residents past cheering crowds at the roadblocks.

One of those onlookers, Holli Stetson, said she was looking for her father, Jerry Boland, who did not evacuate with his wife.

"With no bridges and too much water, there's nowhere to go," Stetson told the Denver Post. "We're just getting more worried by the minute."

The weather service warned Friday of more flash flooding in Loveland. In the town of Drake, the Big Thompson River was more than 4 feet above flood stage. The Big Thompson caused the deadliest flash flood in state history in 1976, when about a foot of rain fell in just four hours, killing 144 people.

Some of the flooding was exacerbated by wildfire "burn scars" that have spawned flash floods all summer in the mountains. The flames strip away vegetation that normally helps absorbs excess water and leave a residue behind that sheds water.

Governor John Hickenlooper signed a disaster declaration and said, "this could easily be a 50 or 100-year-flood."

One person was killed when a structure in Jamestown collapsed. Another man drowned in floodwaters north of Boulder, and a woman who was with him was missing. She was swept away after the vehicle she was riding in got stuck in water.

The man died after getting out of the vehicle to help her, police said.

To the south, Colorado Springs officers conducting flood patrols found the body of 54-year-old Danny Davis in Fountain Creek on the city's west side.