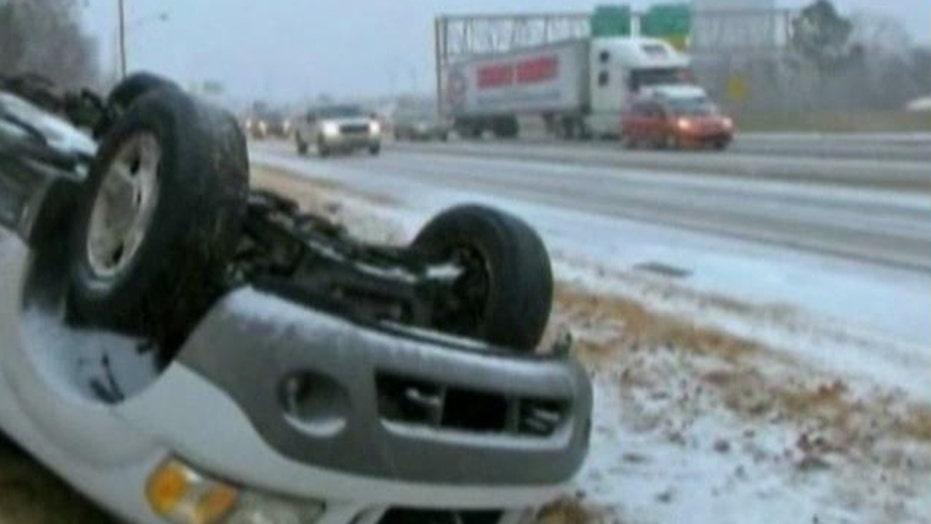 Texas residents have been hit with a wintry storm system that has been blamed for at least two death and left about 250,000 homes in the dark after the system dumped one to two feet of snow in parts of the Midwest.

Officials in Texas identified the two people who died in car accidents as a result of the storm. Arlington police said 29-year-old Chase Brandenburgh's car hit a stopped truck, MyFoxDFW.com reported. And Texas officials say a  Lubbock man died Thursday morning in a two-vehicle wreck on icy roads in the nearby town of Smyer.

This weekend's Dallas Marathon has been canceled after a North Texas ice storm snarled travel and left more than a quarter of a million homes and business without electricity. Organizers of the Dallas Marathon on Friday afternoon cited weather and canceled Sunday's race, which usually draws about 25,000 runners from around the world.

Earlier this week, many in Texas were basking in spring-like temperatures hitting the 80s. But by Thursday, Texas was facing what one hardware store manager called "Ice Friday," part of a storm system that's hitting much of the U.S., bringing frigid temperatures, ice and snow.

"It's almost like a Black Friday, but I guess we'll call it an Ice Friday."

The National Weather Service issued winter storm and ice warnings through much of Friday for parts of Texas, Oklahoma, Arkansas, Mississippi, Missouri, Illinois and Indiana. Some parts of the Midwest were expected to see several inches of snow.

Besides the 250,000 residents in Dallas without power, electric utilities in Arkansas are reporting that more than 35,000 of their customers are without power and officials expect continuing wintry conditions to cause more damage.

Forecasters issued a winter storm warning for the Dallas-Fort Worth area until Friday night.

"Basically we're going to get a bunch of cold rain on and off (Friday), then sub-freezing temperatures are going to move in," Nashville-based NWS meteorologist Angie Lese told Reuters.

After the storm passes, temperatures in parts of the central and western U.S. will be 10 to 30 degrees Fahrenheit through the weekend as a cold air mass spreads through those regions, the National Weather Service said, according to Reuters.

At a Dallas Home Depot, manager James McGilberry said the store was already running out of firewood and ice melt on Thursday afternoon, as freezing rain and wind began hitting the region. Residents were preparing for a storm that threatened to slicken highways, freeze power lines — and leave them stranded through the weekend.

"It's almost like a Black Friday," McGilberry said, "but I guess we'll call it an Ice Friday."

In the Dallas area, agencies and residents are still haunted by the fiasco of a frozen Super Bowl week two years ago, when an inadequate response to a winter storm crippled the region and left visitors stranded on impassable highways.

This time, all of North Texas mobilized before an expected half-inch of freezing rain began to come down. Temperatures are forecast to stay below freezing after the rain passes, meaning residents will have to contend with icy roads through the weekend.

The North Texas Tollway Authority had its 79 trucks stationed Thursday to cover 850 miles of highways with sand, and the city of Dallas went to a condition known as "Ice Force One," readying its own army of dump trucks to handle city roads. Fort Worth, Texas-based American Airlines and American Eagle canceled nearly 500 flights Thursday. About 250 flights were taken off the Friday morning board at Dallas-Fort Worth International Airport and Dallas Love Field.

Dallas and Fort Worth school districts lead a list of suburban and outlying North Texas school systems, colleges and universities that canceled their Friday classes. Numerous government offices also closed, but the Dallas Marathon's organizers had not made a decision whether to cancel Sunday's race, which draws thousands of runners from inside and outside North Texas.

Debbie Jones was at a supermarket collecting the ingredients for a warm winter meal in advance of Friday.

"I'm going to make a gumbo, then try and lay it in for tomorrow," Jones said.

In West Texas, many truckers had already pulled off Interstate 27 on Thursday, said Leilani Pierce, a manager at a Flying J Travel Plaza in Lubbock.

The National Weather Service said 4 to 8 inches of snow was forecast for Missouri overnight and into Friday, according to Reuters.

Just south of St. Louis in Waterloo, Ill., Mark Novack decided to take advantage of the weather to teach his 15-year-old daughter how to drive in slippery conditions, Fox2Now.com reported.

“I thought it would be a great opportunity to make sure when she’s not with me she knows what to do that’s what I’m hoping for. We’re going to find out,” Novack told the station.

Students at Oklahoma State University were evicted by school officials from a makeshift tent community they set up ahead of Saturday's rivalry football game against the University of Oklahoma. Debbie McCarthy, the university's athletics coordinator of special events, told the Tulsa World that officials were worried about propane heaters in use starting a fire.

The city of St. Louis opened its first cold-weather shelter of the season and warned residents to dress in layers inside and outside if need be.

The same system swept through the Plains Thursday and dumped 1 to 2 feet of snow in parts of Minnesota and Wisconsin. It forced cancellations in places far more accustomed to snow: Officials in Rapid City, S.D., said the weather was too cold for ice skating, and temperatures in Montana and Idaho fell below minus 25 degrees.