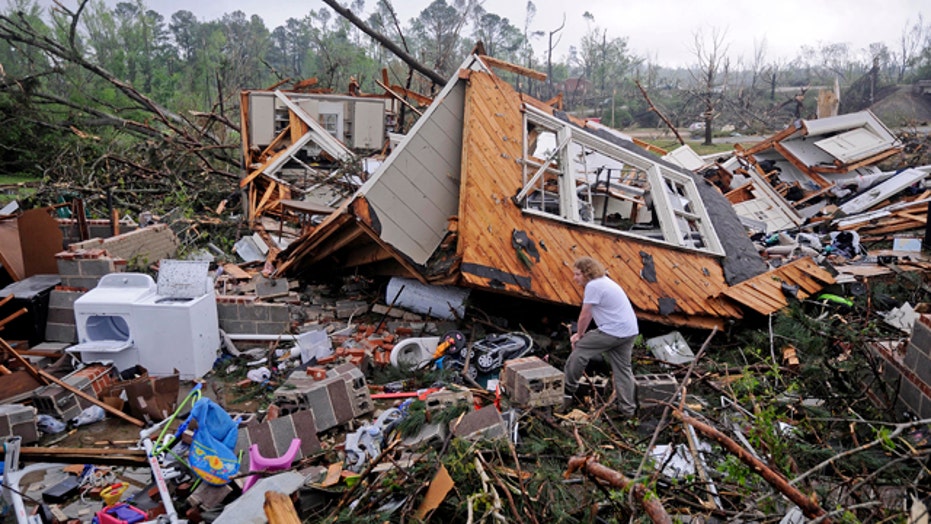 At least 30 killed as tornadoes barrel through the South, Midwest

At least 13 deaths have been reported in Alabama, Mississippi and Tennessee from a storm system that's spawned tornadoes and damaged homes as it moves across the South, threatening millions in its path, officials said.

As the storm hopscotched across a large swath of the U.S., the overall death toll was at least 30, with 13 killed Monday and 17 Sunday in a band stretching from Oklahoma to Alabama. Forecasts showed the storm continuing to move east early Tuesday, with Georgia and Alabama residents waking to sirens, howling wind and pounding rain.

Others found their loved ones missing and their homes pulverized early Tuesday. Along Mississippi Highway 397 on the eastern edge of Louisville, firefighters picked through the remains of mobile homes, searching for three people unaccounted for after a tornado tore through. Twenty firefighters linked hands and waded through an area where wood frame homes had also been heavily damaged. Rescue workers stepped gingerly over downed power lines and trees that were snapped in half and stripped of branches.

The Louisville tornado caused water damage and carved holes in the roof of the Winston Medical Center. The emergency room was being evacuated.

"We thought we were going to be OK then a guy came in and said, `It's here right now,"' said Dr. Michael Henry, head of the emergency room. "Then boom ... it blew through."

Republican state Sen. Giles Ward huddled in a bathroom with his wife, four other family members and their dog as the tornado destroyed his two-story brick house in Louisville and flipped his son-in-law's SUV upside down onto the patio.

"For about 30 seconds, it was unbelievable," Ward said. "It's about as awful as anything we've gone through."

Six people died in Winston County, where Louisville is the county seat, with about 6,600 people. It was unclear whether those deaths were included in the state's total tally.

One of the six was a woman who died in the day care center she owned in Louisville, county Coroner Scott Gregory told The Associated Press late Monday. It was unclear if any children were in the day care center at the time, said William McCully, acting spokesman for the Winston County Emergency Management Agency.

In Tupelo, a community of about 35,000 in northeastern Mississippi, every building in a two-block area south of U.S. Highway 78 suffered damage, officials on the scene said.

On Tuesday morning, a blanket of fog hung over the city as crews cleared trees tangled with power lines, fixed cracked roadway signs and removed debris from streets. Some streets into neighborhoods were blocked by law enforcement vehicles.

Some buildings had their roofs sheared off, while power lines had been knocked down completely or bent at 45-degree angles.

The Northeast Mississippi Medical Center in Tupelo had received 30 patients as of Monday night, four of whom were being admitted with non-life-threatening injuries, said center spokeswoman Deborah Pugh. Pugh said the other 26 patients were treated for minor injuries and released.

The storm sent staff at a Tupelo TV news station running for cover. WTVA-TV chief meteorologist Matt Laubhan was reporting live on the weather around 3 p.m. when he realized the twister was coming dangerously close.

"This is a tornado ripping through the city of Tupelo as we speak. And this could be deadly," he said in a video widely tweeted and broadcast on YouTube.

Moments later he adds, "A damaging tornado. On the ground. Right now."

He peeks in from the side to see if he's still on the air before yelling to staff off-camera: "Basement, now!" He then disappears off camera.

Later, the station tweeted, "We are safe here."

In southern Tennessee, two people were killed in a home when a suspected tornado hit Monday night, Lincoln County Emergency Management Director Mike Hall said. The winds destroyed several other homes as well as a middle school in the county that borders Alabama, Hall said.

In northern Alabama, the coroner's office confirmed two deaths Monday in a twister that caused extensive damage west of the city of Athens, said Limestone County Emergency Director Rita White. White said more victims could be trapped in the wreckage of damaged buildings, but rescuers could not reach some areas because of downed power lines.

With the wind howling outside and rain blowing sideways, Monica Foster rode out a tornado warning with her two daughters, ages 10 and 12, inside a gas station near Fayette, Ala. One of the girls cried as the three huddled with a station employee in a storage area beside a walk-in cooler.

Foster, who was returning home to Lynn on rural roads after a funeral in Tuscaloosa, said she typically would have kept driving through the deluge.

"I wouldn't have pulled in if I didn't have the two girls," she said.

The threat of dangerous weather jangled nerves a day after the three-year anniversary of a historic outbreak of more than 60 tornadoes that killed more than 250 people across Alabama on April 27, 2011.

Separately, Limestone Commissioner Bill Latimer said he received reports of four deaths in the county from one of his workers.  Neither the governor's office nor state emergency officials could immediately confirm those deaths.

The storm system is the latest onslaught of severe weather a day after a half-mile-wide tornado carved an 80-mile path of destruction through the suburbs of Little Rock, Ark., killing at least 15. Tornadoes or severe storms also killed one person each in Oklahoma and Iowa on Sunday.

MyFoxAL.com reported that a large tornado damaged apartments near the Medical West Hospital in Bessemer. Some people were reportedly trapped at a church in Kimberly, but no injuries were reported.

George Grabryan, director of emergency management for Florence and Lauderdale County in northwest Alabama, said 16 shelters opened before storms even moved in and people were calling nervously with questions about the weather.

"There's a lot of sensitivity up here," Grabryan said. "I've got a stack of messages here from people, many of them new to the area, wanting to know where the closest shelters are."

Forecasters said the system moving into Alabama could generate tornadoes with strength ratings of EF-3 or higher and damage tracks 30 miles long or worse.

Elsewhere, forecasters warned Georgia residents of a threat of tornadoes in northern and central counties in coming hours.