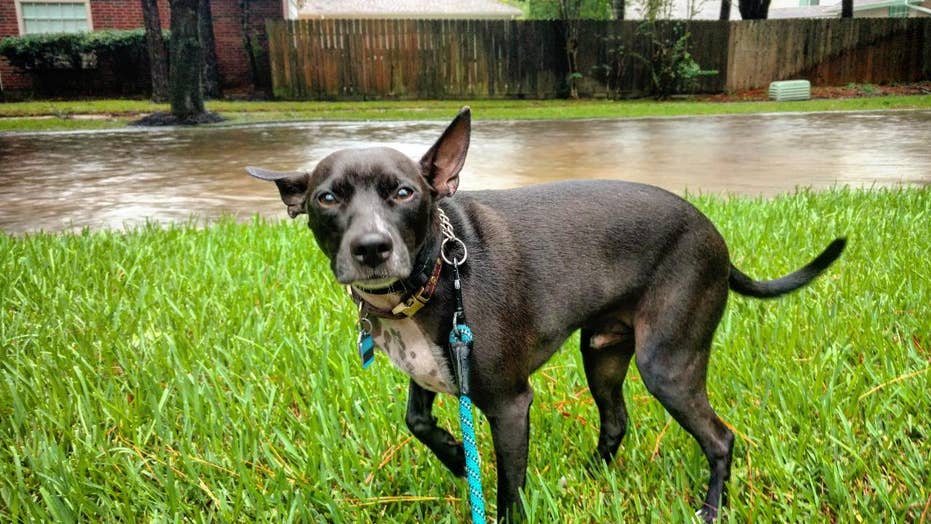 With Hurricane Florence on its way to the southeastern U.S., many pet owners should consider the needs of their four-legged friends and how to keep them safe. Take a look at safety tips from the Florida Division of Emergency Management.

As Hurricane Florence, a Category 4 storm charging for the East Coast, is expected to make landfall Thursday, animal shelters are asking volunteers to help protect animals.

North Carolina, South Carolina, Virginia and Maryland are all under a state of emergency as the "monster" storm has forced governors to order mass evacuations for their millions of residents.

SAFETY TIPS FOR PETS AHEAD OF HURRICANE FLORENCE

Animal organizations, consequently, are urging those along the eastern seaboard to take care of their pets — and to help those in areas expected to be hit by the barreling storm.

One shelter in Norfolk, Virginia evacuated eight dogs and and 18 cats to a shelter in Washington, D.C. run by Humane Rescue Alliance — an effort made to make room for incoming animals expected to be displaced by Florence.

"Usually, if people do not have a place to take them or if the animals get lost in the shuffle of the storm, they may end up as strays," alliance spokesperson Matt Williams said. "The animals will be held for a period of time and then they wait for the animals to be claimed."

In Charlotte, North Carolina, a local Humane Society is taking in animals from areas of the state that were ordered to be evacuated.

The shelter asked on Facebook Monday if those within the Charlotte area could foster "dogs, cats, and kittens," noting that, "The more animals we get to fosters, the more animals we can shelter from the coastal areas."

Tips to prepare your pets for emergencies

The Greenville Humane Society in South Carolina was more than 200 animals over capacity as of Monday  — with over 60 of them taken in from low county areas forecast to be hit hard by the storm.

These shelters are a few of many requesting fosters and donations across the eastern states expected to be slammed by Florence later this week. Shelters are asking for donations of newspapers, food and litter.

The American Society for the Prevention of Cruelty to Animals (ASPCA) warned that people should make sure to include their pets in any emergency plans in preparation for the storm, even though the organization remains "ready to assist."

Frances, an 8-year-old Chihuahua mix, is one of 26 cats and dogs who were transported from Virginia to Washington, D.C. ahead of Hurricane Florence's expected landfall later this week. (AP Photo/Carolyn Kaster)

In 2017 alone, the ASPCA said they responded to Hurricanes Maria, Harvey and Irma, in addition to other natural disasters, and rescued or assisted upwards of 37,000 animals.

Pet owners, according to the ASPCA, should prepare with a disaster plan, which includes ensuring all pets are wearing ID tags and preparing an emergency kit with food, medications, medical records and water bowls.