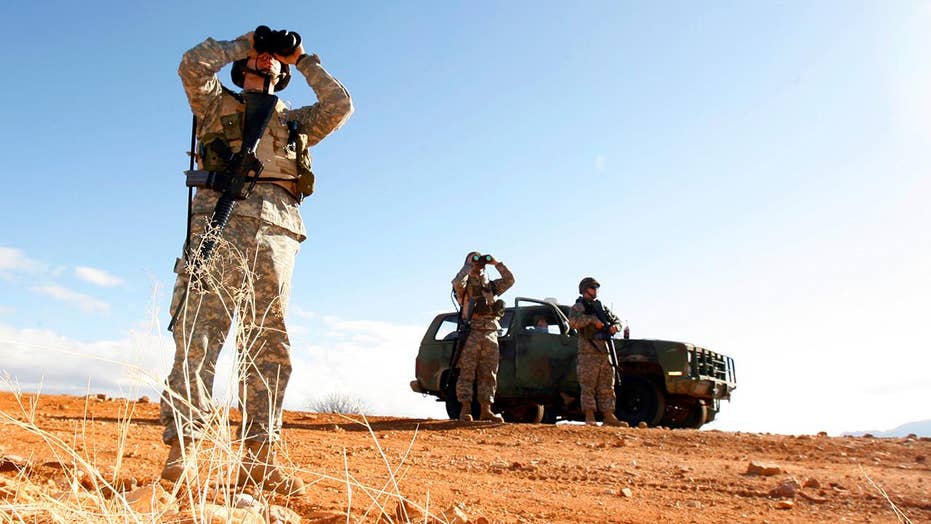 Several states such as California and Oregon have responded with opposition; William La Jeunesse has the latest from Los Angeles.

Officials in Arizona and Texas announced Friday their plans to send National Guard members to the U.S.-Mexico border. The governor of Arizona said he planned to send about 150 members, while the Texas National Guard said it would send 250.

The announcement follows comments by President Donald Trump on Thursday, in which he said he wanted to deploy between 2,000 and 4,000 guard members to the southern border in order to combat illegal immigration and drug trafficking.

TRUMP SAYS HE WANTS TO SEND 2,000 TO 4,000 NATIONAL GUARD MEMBERS TO US-MEXICO BORDER

"Tonight, National Guard troops are deploying to support border security missions along the U.S. southwest border. Working closely with the border governors, the Department of Homeland Security identified security vulnerabilities that could be addressed by the National Guard. We appreciate the governors' support and are dedicated to working with them to secure the national borders.

"Together, the Departments of Homeland Security and Defense are committed to using every lever of power to support the men and women of law enforcement defending our nation's sovereignty and protecting the American people. We will continue to work with the governors to deploy the necessary resources until our nation's borders are secure."

Arizona Gov. Doug Ducey announced via Twitter on Friday that he would send the troops to the border at some point next week.

The governor's office told Fox News that the “state will not share in costs under Title 32.” Under that law, National Guard members receive federal pay and benefits, but remain under the command and control of their state's governor.

“Our office is working closely with @AZNationalGuard, @DeptofDefense and @DHSgov on plans to deploy approximately 150 national guard members to the border next week,” Ducey said on Twitter.

The Texas National Guard said Friday that it plans to deploy 250 personnel to the border over the next 72 hours.

Earlier Friday, the Texas Military Department tweeted that the National Guard was prepping “to deploy to Texas – Mexico border.”

Along with Trump’s comments on Thursday, the president said he intended to “probably keep them or a large portion of them until the wall is built,” referring to the National Guard troops.

"We have to have strong borders. We're going to have the wall," Trump said. "We've started building and fixing miles and miles of wall that’s already up and fence and we’re gonna have our wall and we’re gonna get it very strongly and the military is going to be building some of it."

On Wednesday, Trump signed a proclamation sending the guard to the border in an effort to stop what his administration called an "unacceptable" flow of drugs, criminal activity and illegal immigrants.

DHS Secretary Nielsen previously said that the president ordered the deployment because "we are at a crisis point" with illegal immigration.

"We'd like to stop it before the numbers get even bigger," she said.

Nielsen added that guard members would provide support to border officials, "help look at the technology, the surveillance, in some cases we'll ask for some fleet mechanics" and free up agents trained in law enforcement for other duties.

The Pentagon also announced the creation of a 24-hour "border security support cell." That liasion cell met for the first time on Friday, Fox News learned.