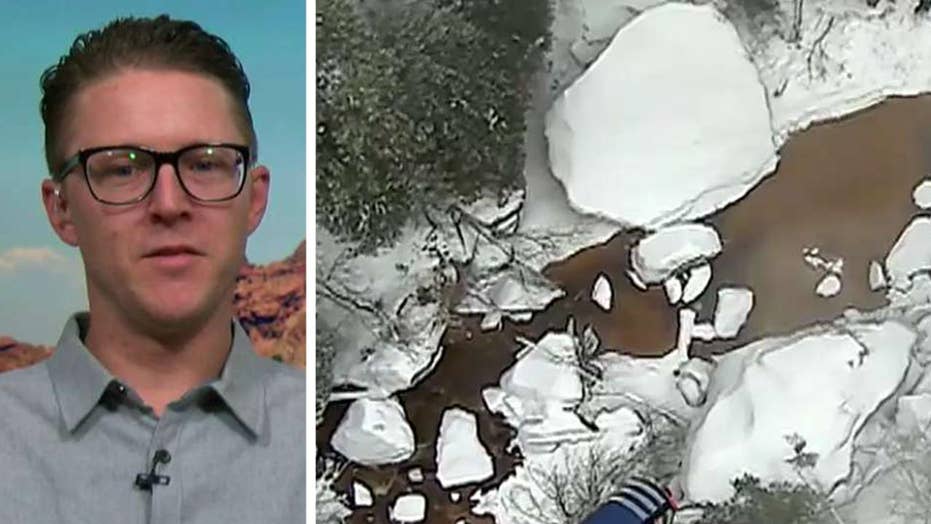 Hiker describes being trapped in quicksand for hours

An Arizona man who was hiking with his girlfriend at Zion National Park in Utah is telling the tale of being stuck hip-deep in quicksand for 11 hours during a winter storm over the weekend.

“It was one of those scariest moments of my life,” Ryan Osmun told Shepard Smith on “Shepard Smith Reporting.”

He said he was able to stand on his left leg, but the quicksand was up to his hip and right leg.

“I stopped sinking at my hip,” he said.

He struggled to stay awake during his ordeal.

Osmun said he was hiking with his girlfriend, Jessika McNeill, on Saturday when she got stuck in mud and fell into the creek. He helped her up, only to realize he was himself sinking into the sand.

“My leg just went right into the ground, and it sucked me in,” McNeill told Smith.

Osmun's girlfriend tried to free his leg, to no avail. “I was trying to dig him out with my hands, and it was freezing,” she told Smith.

ARIZONA MAN RESCUED AFTER GETTING STUCK IN QUICKSAND FOR HOURS

McNeill left to go get help. One major complication: They were five hours into the hike, with no real trail or cellphone reception.

Osmun recalled collapsing into the water eight hours after his girlfriend left to look for help. He later awoke to a flash of light and thought he was dreaming, when rescuers found him.

“Only after a small break in the weather occurred in the afternoon, the (Utah Department of Public Safety) helicopter was able safely extricated the patient with a hoist rescue operation,” officials said in a news release.

Osmun was reunited with his girlfriend at the hospital, where he was treated for exposure, hypothermia and extremity injuries.