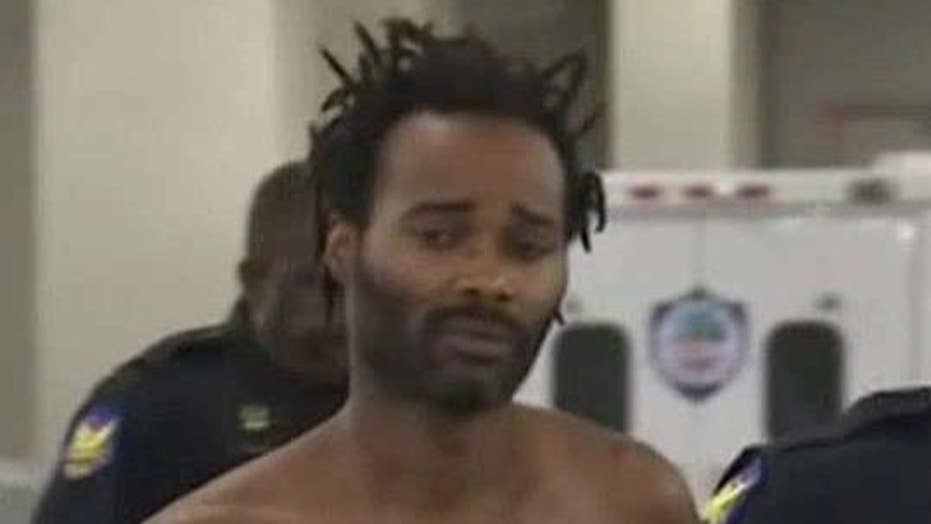 PHOENIX – A driver plowed into two police officers outside a Phoenix gas station on Tuesday and proceeded to scuffle with a third policeman who managed to get out of the way in what the police chief denounced as a "violent, intentional act."

Police said Marc LaQuon Payne, 44, apparently drove his vehicle at the officers before hitting a patrol car and crashing into the front of the QuikTrip store around 2 a.m. Tuesday.

"We are confident that this is an intentional act," Phoenix Police Chief Joseph Yahner said at an afternoon news conference. "Our officers were targeted."

Payne was taken to a hospital in serious condition and is expected to be booked into jail after he's released, according to police who believe he was driving impaired.

They said Payne will likely face three counts of attempted first-degree murder and two counts of aggravated assault. It wasn't immediately clear if he has an attorney yet.

The attack came during an especially violent year for police officers nationwide, including separate deadly attacks in Baton Rouge, Louisiana, and Dallas over the summer.

"I'm outraged by this incident. This stuff needs to stop," Yahner said.

Phoenix police released a store surveillance video of the incident. It showed a vehicle backing out of a parking space, circling the parking lot and then accelerating toward the three police officers.

A 41-year-old police sergeant suffered a broken leg, a 36-year-old veteran officer had minor injuries and a 33-year-old officer on his first day of training suffered a head injury.

The video shows the rookie officer thrown several feet in the air and hitting the front windshield of the suspect's vehicle, police said.

One officer managed to jump out of the way, but was injured during a struggle with Payne following the incident.

"He runs over us, and he still fights with us," Yahner said of the suspect.

The gas station remained closed Tuesday afternoon and blocked off with police tape as workers swept up shattered glass and installed new brick where the car smashed through the building. The car was taken away by police.

The names of the three officers weren't immediately released by police. All were taken to hospitals for treatment.

Phoenix Mayor Greg Stanton said he spoke with two of the officers involved in the incident and "thanked them for their valor and wished them a speedy recovery."