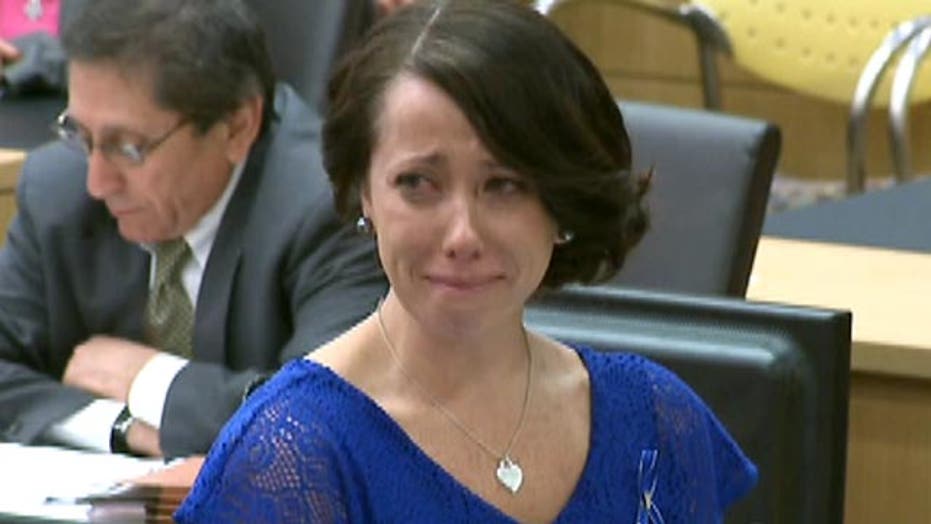 Jurors deciding whether convicted murderer Jodi Arias will get the death penalty heard the victim's brother describe Thursday how he was hospitalized for ulcers, lost sleep and separated from his wife after his brother was killed.

Travis Alexander's younger brother Steven paused to choke back tears and regain his composure as he recounted the phone call he got from his sister the day his brother's body was found.

The same jury convicted Arias of first-degree murder last week after about 15 hours of deliberations. During the trial's ongoing final penalty phase, the panel will decide whether to sentence Arias to life in prison or death for the 2008 murder of her one-time lover.

Arias cried periodically during the testimony and looked away from jurors.

"The nature of my brother's murder has had a major impact on me. It's even invaded my dreams," Steven Alexander testified. "I've had nightmares about somebody coming after me with a knife, then going after my wife and my daughter.

In opening statements, prosecutor Juan Martinez said there are no mitigating factors that should cause the jury to even consider a sentence other than death. The judge had instructed jurors that they could take into account certain things that might help them make a decision, such as Arias' lack of a prior criminal record and assertions that she was a good friend, had an abusive childhood and is a talented artist.

Martinez said none of that matters in regard to the brutal killing.

"The only appropriate sentence ... is death."

Defense attorney Kirk Nurmi opened his part by explaining to jurors that their decision ultimately would be the final one.

"Your verdict, ladies and gentleman, will determine whether or not Jodi Arias spends the rest of her life in prison or if she is sentenced to be executed," Nurmi said.

He then told the panel they would later hear directly from Arias.

"When you understand who Ms. Arias is, you will understand that life is the appropriate sentence," Nurmi said.

Alexander's sister Samantha later described for the panel how their grandmother, who raised the victim, saw her health fail after the killing and died around the time of jury selection.

"Travis was the glue in our family," Samantha Alexander said. She also recalled her brother's charisma, sense of humor, insight and "huge smile."

"Travis was our strength, our beacon of hope, our motivation," she said through tears. "Our lives will never be the same. ... We would give anything to have him back."

Steven Alexander recalled seeing his brother for the last time over the Christmas holiday in 2007. "Now when I want to talk to or see my brother, I have to go to a ... 6-foot-deep hole in the ground," he said.

The trial was inexplicably delayed Thursday afternoon after the judge and attorneys met privately. It is set to resume Monday morning when other witnesses will include Arias' friends and an ex-boyfriend who lived with her for several years in California.

Earlier this week, Arias' attorneys asked to be allowed to step down from the case, but a judge denied the request.

Details about the motion were sealed, but legal experts said Arias complicated efforts for her defense when she gave an interview to Fox affiliate KSAZ minutes after her conviction, saying she preferred death over life in prison.

"I believe death is the ultimate freedom, and I'd rather have my freedom as soon as I can get it," Arias said.

The interview prompted the judge to issue an order that the Maricopa County Sheriff's Office allow no more interviews with Arias. Less than a week later, on Thursday, Sheriff Joe Arpaio gave reporters a tour of Arias' cinderblock jail cell. The messy cell had a mattress on a lower bunk and the upper bunk was cluttered with files and papers.

Los Angeles-area criminal defense lawyer Mark Geragos said Arias' attorneys have a conflict of interest with their efforts to keep their client off death row and Arias' assertion that she'd rather die for her crime.

"It's not highly unusual," he said. "There are cases where defendants make decisions that they're better off on death row, but that puts the lawyer in a conflicted position. You've got a duty as a lawyer to bring the conflict of interest to the courts and disclose it."

Added Phoenix criminal defense lawyer Julio Laboy: "It would be something I would do in my major felony cases if I found that a client was actually working against me and not working with her defense."

Arias cannot choose the death penalty. It's up to the jury to determine a sentence. Her attorneys' motion to withdraw will have no impact on the penalty phase of the trial given jurors are not privy to the filing, and not even media have the details due to a court order sealing all such proceedings.

Arias, 32, acknowledged killing Alexander at his suburban Phoenix home after a day of sex on June 4, 2008. She initially denied any involvement and later blamed the attack on masked intruders. Two years after her arrest, Arias said she killed Alexander in self-defense.

The victim suffered nearly 30 knife wounds, had his throat slit from ear to ear and was shot in the forehead. Prosecutors say the attack was fueled by jealous rage after Alexander wanted to end his affair with Arias and prepared to take a trip to Mexico with another woman.