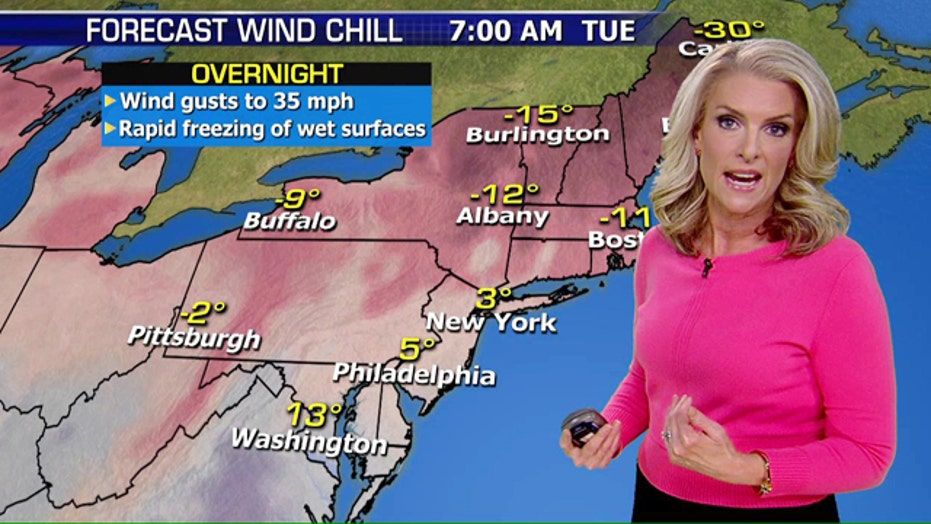 Snow and ice on the move

Northeasterners weary after a second winter blast in as many weeks are being warned: Don't pack away your heavy-duty gear just yet.

That's because a 1,500-mile-wide current of Arctic air promises to plunge the Midwest and Northeast into a deep freeze -- and it's not going to release its grip for the rest of the work week.

"We're in a below-average pattern, and I could see that happening for the next five days or so," David Hamrick, a National Weather Service meteorologist, told FoxNews.com.

Temperatures in the upper Midwest to the Northeast will drop into the teens and single digits late Monday, with parts of Maine, Vermont, upstate New York and Michigan experiencing sub-zero conditions.

"We're in a below-average pattern, and I could see that happening for the next five days or so."

Winter weather warnings remained in effect throughout New England, where snow was expected to continue to fall until midnight, Hamrick said. He added that New England and parts of coastal New Jersey may see a few snow showers late Thursday into Friday, though forecasters were not predicting a major event.

Already, the storm has done a number on commuters in the Northeast. FlightAware.com reported early Monday evening that more than 4,100 flights within, into or out of the U.S. were canceled, and about 3,500 were delayed. About a million seats were affected, impacting about 600,000 travelers.

Trains were delayed, driving was dangerous and even the subway in New York City struggled with the storm. A No. 7 train in the borough of Queens lost power for 2 ½ hours, and a rescue train had to be sent for the stranded passengers.

"Everyone on the train was in decent spirits, since there was literally nothing we could do about it," passenger Ashley Carr said in an email.

Farther north, fast-falling snow measured 6 inches in Albany by midday Monday and 11 inches in Buffalo. Schools closed across the region and plows struggled to keep up with the deluge. Temperatures barely climbed out of single digits.

"It's challenging," said Lisa Smoczynski, who was working at a Buffalo construction site Monday as heavy snow fell and a stiff wind made the 12-degree temperature seem much lower.

In the northern suburbs, after 6 to 12 inches of snow, the precipitation kept falling but changed intermittently from snow to sleet to rain. Icy pellets bounced off windshields as motorists slowly made their way along interstates, parkways and local streets in Westchester County. In White Plains, Estelle Windsor of the Bronx was trying to walk several blocks from one indoor shopping mall to another after being told she'd have to wait half an hour for a cab.

"I should have waited," she shouted into a cold wind. "I'm getting this sleet in my eyes. It's like they're shooting BBs at you."

Travel was treacherous statewide with cars and trucks sliding off roads.

The accident closed northbound lanes near Exit 22. Separately, three tractor-trailers jackknifed on I-95 and Interstate 87, and one flipped over on the Long Island Expressway.

In Brooklyn, two people were injured in a manhole explosion that appeared to be weather-related. A Fire Department official told the Daily News one man was hurt by a flying manhole cover and a woman was hit by glass when her window shattered. Road salt and melting snow can cause problems when they seep into the underground utility system.

"It's going to be very dangerous to travel with these icy conditions," Murray said. "It is recommended that people stay home, but if they must travel, they should proceed extra slowly and use extra caution."

There was a hint of good news for New Yorkers desperate enough to put stock in a groundhog. Staten Island Chuck didn't see his shadow, supposedly auguring an early spring.

The groundhog was kept away from New York City Mayor Bill de Blasio this year after the rodent who played Chuck last year fell from the mayor's grasp and died a few weeks later.