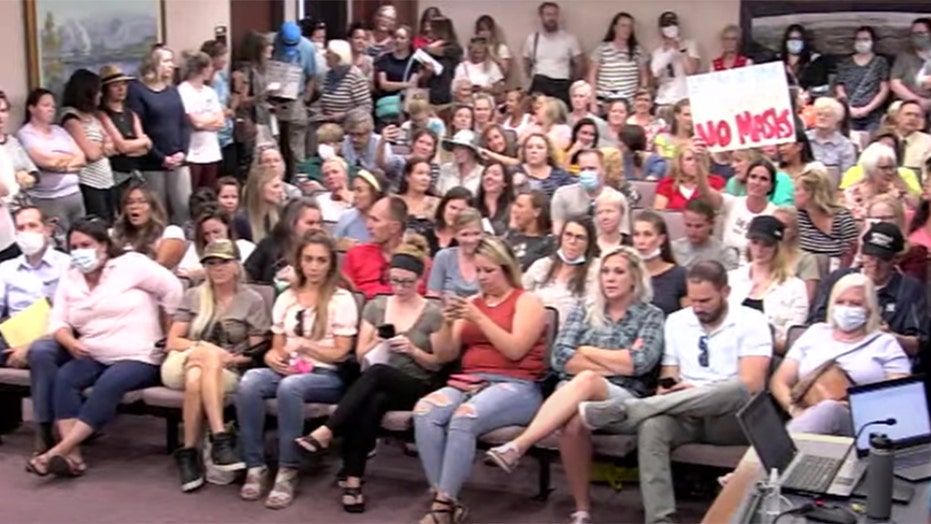 Nearly 100 anti-mask protesters filed into a Utah county meeting Thursday to oppose mask mandates for children when school reopens, forcing officials to reschedule a vote on the rule.

Prior to the vote, Utah County Commissioner Bill Lee addressed a maskless crowd of protesters, taking off his mask to applause and cheers. Lee said that although he supports wearing a mask to protect against coronavirus, he does not support a mandate by Gov. Gary Herbert. That rule would require students in K-12 schools wear masks in the classroom and on school buses once school reopens.

Thursday's vote was to petition the Utah County Health Department to grant the county “compassionate exemption from the one-size-fits-all mask mandate in Utah County’s public schools.”

“Lee organized that for political theater and put the entire room at risk while ignoring health department guidelines,” Ainge said.

Protesters booed Ainge and his motion, but it passed 2-1. The commission did not set a new date for the vote but said they are thinking of holding it virtually.

Those against wearing a mask have said mandates are unconstitutional. Others said they are ineffective in stopping the spread of COVID-19, despite health officials and experts proving otherwise.

The governor's mandate, which he announced July 9, was issued with guidance from medical officials who told the commission that hospitalization rates in Utah County are rising, threatening to overwhelm bed capacities at local hospitals.

"From Memorial Day forth, we’ve been rapidly on the ascent,” Tracy Hill, chief medical officer of Utah Valley Hospital in Provo, told the commission last week. “We’re now averaging nearly 100 new positive-testing individuals a day. And with that, our hospitalizations … have been rising.”

Hill said data projects that if numbers continue to rise into August, “We will be stretching our capacity to care for these folks.”

“Right now, we are in pretty good shape,” he said. “That said, if this surge continues on the rate that we’re currently on, we could be ... overwhelmed.”