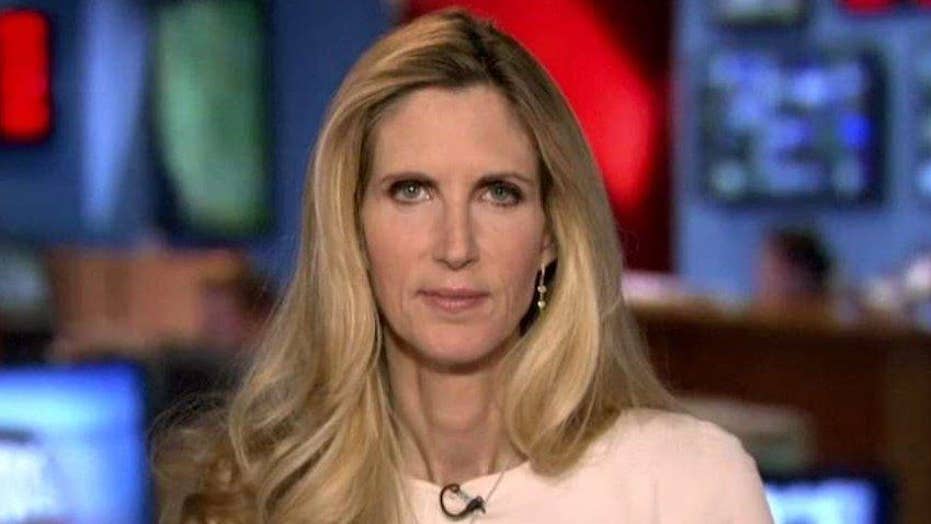 Ann Coulter on Berkeley event: My allies ran away, gave in

The hecklers used their veto.

Conservative commentator Ann Coulter told Fox News on Wednesday she would no longer give a planned speech at UC Berkeley after Young America’s Foundation pulled its support for the event amid threats of violence, calling her decision "a dark day for free speech in America."

The speech was originally scheduled to take place Thursday – but Berkeley asked to postpone it until next month after protests over the planned speech grew into a nationally-watched firestorm.

"I looked over my shoulder and my allies had joined the other team."

Coulter, YAF -- which had helped organize and finance the event -- and the Berkeley College Republicans initially fought the school’s decision, with YAF and the college Republicans filing a civil rights lawsuit on Monday. But by Wednesday YAF had “actively” opposed Coulter’s speech, she said, and “ordered the lawyer not [to] file for [a] court order” which would have mandated a room for the talk. The college Republicans are bound by YAF’s decision, Coulter said, “so there’s nothing more I can do.”

“I looked over my shoulder and my allies had joined the other team,” Coulter said in an email.

In a series of tweets, Coulter said she was "so sorry for free speech crushed by thugs."

"It’s sickening when a radical thuggish institution like Berkeley can so easily snuff out the cherished American right to free speech," she tweeted.

'THE FIVE' ON ANN COULTER AT UC BERKELEY

"It’s unfortunate we had to cancel the event due to security reasons," Berkeley College Republicans President Troy Worden told reporters.

In a Tuesday statement posted to the YAF website and signed by both YAF and the executive board of the college Republicans, the groups said Berkeley "failed to meet our demands" to provide a safe environment for the speech.

"Ms. Coulter may still choose to speak in some form on campus, but Young America's Foundation will not jeopardize the safety of its staff or students," the statement said.

"The lawsuit has not been dropped," said YAF spokesman Spencer Brown. "At no time did Berkeley provide a time or place for Coulter to speak, and unconstitutionally violated the First Amendment rights of students in preventing YAF's campus lecture from taking place. We are moving ahead with the lawsuit."

Chancellor Nicholas B. Dirks sent a letter to the campus Wednesday saying the university is committed to defending free speech but also to protecting its students.

"This is a university, not a battlefield," Dirks said in the letter. "The university has two non-negotiable commitments, one to Free Speech the other to the safety of our campus community."

Coulter was coy about what she would be doing instead of giving the talk.

“I think I’m still going to Berkeley, but there will be no speech,” Coulter said Wednesday.

The university's attempt to call off the event came after a series of violent clashes this year on campus and in downtown Berkeley between far-right and far-left protesters.

The lawsuit demands unstated damages and compensation for attorney fees, a trial by jury and an injunction against Berkeley officials from "restricting the exercise of political expression on the UC Berkeley campus."

Attorney and RNC National Committeewoman Harmeet K. Dhillon said the lawsuit filed against the Berkeley is a "long term remedy" with a "much larger goal."

The University of California president's office issued a statement saying it welcomes speakers of all political viewpoints and "is committed to providing a forum to enable Ann Coulter to speak on the Berkeley campus."

"The campus seeks to ensure that all members of the Berkeley and larger community -- including Ms. Coulter herself -- remain safe during such an event."

"You will see a high number of highly visible law enforcement. We're going to have a very, very low tolerance for any violence," he told a news conference. He said Berkeley police had reached out to local and state police forces "to let them know we might be calling for assistance."

Fox News’ Michael Lundin and The Associated Press contributed to this report.