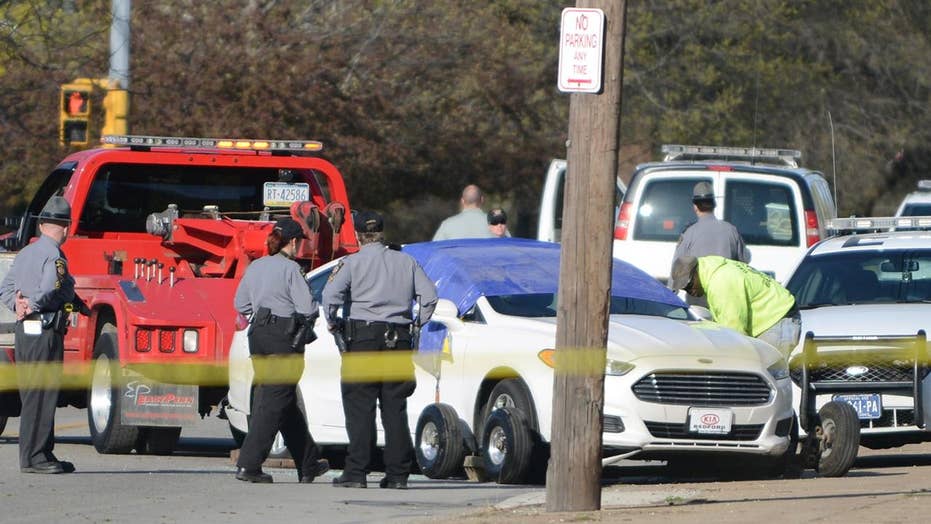 Matt Finn has the details

A shocking video of a grandfather being shot dead was still available on Facebook last night – a week after it was posted.

Stephens, 37, shot himself dead on Tuesday while on the run from cops in Pennsylvania, USA.

Last night, the Sun on Sunday found his graphic footage could still be viewed on Facebook – despite the social network’s claims it had been removed.

Robert Godwin Jr, 48, son of the slain victim, said: “I just don’t understand why they haven’t taken it down.

“I don’t know what the process of taking it down is – I just know I want that video gone.

“I have to relive it every day – so I wish it would just go away.

“It is so hard having this constant reminder for my family and all the people who cared about my father and have love in their hearts.”

Choking back tears, he added: “It hurts us.”

In the 30-second clip, killer Stephens can be heard growling “Found me somebody I’m about to kill...this old dude” before brutally executing Godwin in the street in Cleveland, Ohio.

This week it was the top result when Facebook users searched for “RIP Robert Godwin” and “Steve Stephens shooting”.

MPs and politicians called on Facebook to do more to police what gets uploaded to the site.

LibDem home affairs spokesman and ex-senior Met police chief Brian Paddick said Facebook had “a responsibility and duty of care in setting the standards for a civilised society”.

He said: “This video shows total insensitivity for the tragic death of this innocent man. It must be unbearably traumatic for the victim’s family.

“Facebook should be doing everything they can to make sure it is taken down and not shared across its platforms. This is about dignity and respect and they cannot be allowed to continue with this hands-off approach.”

Tory MP Alec Shelbrooke said: “It is always difficult to monitor millions of things being uploaded but this case is very high profile.

“It shows a complete lack of corporate governance and care by Facebook to allow the video to still appear on its system.

“You would expect them to act with immediacy with something as high profile as this.

“It clearly shouldn’t be on there and you would expect them to act with immediacy and it raises bigger questions about their corporate governance.

"History has always shown that companies with poor corporate governance suffer in the long run.”

Stephens, who worked for a behavioural health agency, uploaded the clip, titled “Easter day slaughter”, to Facebook on Sunday shortly after the shooting.

The video shows him approaching Godwin and asking the elderly man to repeat his ex-girlfriend’s name, saying: “Can you say Joy Lane? She’s the reason this is about to happen to you.”

The killer brandishes his gun as Godwin tries to shield his head with a plastic bag, pleading: “I don’t know anybody by that name.”

Stephens then pulls the trigger.

In a second Facebook video he claimed to have killed more than a dozen other people, adding: “Like I said, I killed 13, so I’m working on 14 as we speak.”

He also claimed he was motivated to kill after breaking up with Joy, who he dated for three years.

Facebook founder Mark Zuckerberg admitted on Tuesday that his firm had more to do over the issue of violent videos.

They traced his phone to Pennsylvania following the killing.

They received a tip-off Stephens’ car was in a McDonald’s car park in Erie, but he sped off before turning his weapon on himself.

In rambling messages, Stephens claimed he snapped over gambling debts and breaking up with his girlfriend.