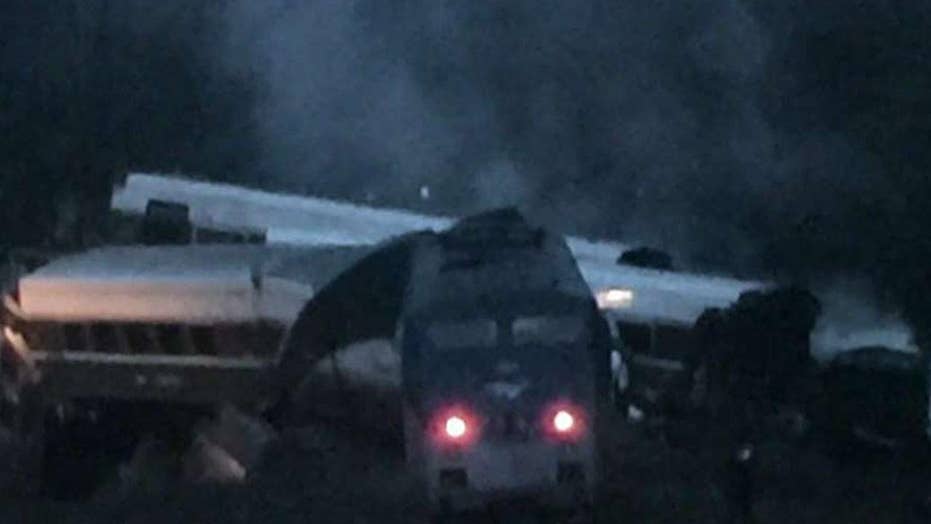 Official: Amtrak engineer in crash may have been distracted

The engineer at the controls of the Amtrak train that derailed last month in Washington state knew he needed to slow down, but didn’t recall seeing signposts and signals along the track warning him of the slow curve ahead, according to a federal report released Thursday.

The National Transportation Safety Board said investigators questioned the engineer and the conductor the week of Jan 15. Both were in the lead locomotive during the inaugural trip on the new route on Dec. 18 before the train derailed, killing 3 people and injuring 70 others.

The two men suffered "serious injuries" in the crash, and were not able to be interviewed until the week of Jan. 15, according to the NTSB.

The engineer, a 55-year-old man who has yet to be officially identified, told investigators he had made as many as 13 qualifying trips down the track before the inaugural run with paying passengers.

Several Amtrak train cars fell over the overpass and onto Interstate 5 in Washington state after derailing. (AP Photo)

On the first run with passengers the morning of Dec. 18, the engineer said he was "aware that the curve with the 30 mph speed restriction was at milepost 19.8, and that he had planned to initiate braking about one mile prior to the curve."

"The engineer said that he saw mileposts 16 and 17 but didn’t recall seeing milepost 18 or the 30 mph advance speed sign, which was posted two miles ahead of the speed-restricted curve," the NTSB said in its report. "The engineer said that he did see the wayside signal at milepost 19.8 (at the accident curve) but mistook it for another signal, which was north of the curve."

As soon as the engineer saw the 30 mph sign at the start of the curve, he applied brakes but the train derailed "seconds later" as it entered the curve.

The NTSB said last month the Amtrak train was going 80 mph in a 30 mph zone when it derailed along a curve, causing railcars to fall onto the highway and smash into vehicles below. A total of 13 train cars jumped the tracks.

The conductor in the locomotive, a 48-year-old man, told the NTSB that just prior to the derailment he was looking down examining paperwork when he heard the engineer "say or mumble something," then looked up and sensed the train was becoming "airborne."

The crash happened  on the first day the train was operating on a new bypass route between Seattle and Portland that was created by refurbishing freight tracks along the major interstate. The $180.7 million project was aimed at speeding up service by bypassing an old route that had a number of curves, single-track tunnels and freight traffic.

Amtrak President Richard Anderson said shortly after the crash that Positive Train Control – the technology that can slow or stop a speeding train – wasn’t in use on the stretch of track where the derailment unfolded.

The official investigation into the crash is expected to take between 12 to 24 months, according to the NTSB, as they look at information from cameras, the locomotive event data recorder and other sources.