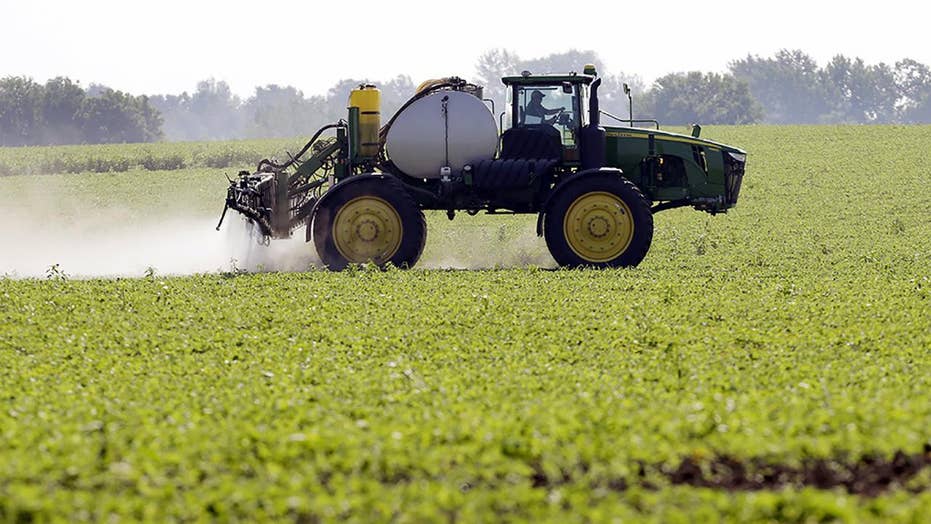 At a small farm in Rockville, located in Hanover County in the central part of Virginia, a customer peruses the fare of grass-fed beef, poultry and eggs and asks the young proprietor, C.J. Isbell: "Is this pasture raised?"

He answers with pride, "Oh yeah. We move the cows every day."

Isbell is solely responsible for what he's selling - having raised it, processed some of it,  and marketed it by himself.

Isbell's endeavor is all the more admirable given the tenuous state of the small farm in America today: over 12-thousand American farms went out of business in 2017; Net farm incomes have dropped 52 percent in the last five years; Bankruptcies are up 33 percent in the last two years.

That, according to a sobering opening statement Wednesday at the Farm Bill mark-up from House Agriculture Committee Chairman Mike Conaway. "Not long ago," Conaway said, "two key universities informed us that two-thirds of the representative farms they use to model the economic conditions of agriculture are currently in marginal or poor financial condition."

But where Congress sees dark clouds, Isbell sees opportunity in the new trend towards locally grown produce and meat . "We're trying to seize on that," he says. "We were fortunate in that aspect to be so successful with the timing."

Isbell, a full-time Washington D.C. firefighter in the special operations unit, started Keenbell Farm after dreaming about how to revive his grandfather's farmland. "Growing up, I always wanted a farm, but seeing the struggles that my grandfather went through, it kind of discouraged me."

But the discouragement gave way to optimism, and he found a way to begin a new type of farm, with the help of his father, Eddie.

Thousands of other young, hopeful entrepreneurs like CJ are kindling a renaissance in farming,  returning to the land, combining old school scale, with 21st Century marketing. "Many beginning farmers are now starting in direct retail sort of business, like selling direct at a farmers market or through a community supported agriculture subscription sort of marketplace," says Gary Matteson,  the Vice President of the Young, Beginning, Farmers program at the Farm Credit Council.

Lobbyist Matteson is living by the words he preaches. In May, he's leaving his Washington, D.C. job to return to his family farm in New Hampshire, also hoping to capitalize on the locally grown trend that has retail markets and restaurants clamoring for suppliers.  "We all used to eat local food, right?" he says. "I mean food was grown near us and our diets were regularly changed by what was in season near us and we had regional foods."

Congress is also intent on expanding opportunities for new young farmers. One bill sponsored by Senate Majority Leader Mitch McConnell, The Hemp Farming Act of 2018, would remove industrial hemp, the non-psychoactive cousin of marijuana, from the Controlled Substances Act. With its soil replenishing qualities and uses in fabric, food, lotions, and anti-seizure oils, many farmers are convinced it's a potential replacement for a mostly bygone cash crop, tobacco.

In introducing the bill, McConnell said farmers in his home state, "have shared with me their enthusiasm for hemp’s potential to re-energize agricultural communities and provide a new spark to the U.S. economy.”

An advocacy group, The New Young Farmers Coalition believes Congress isn’t doing enough to attract aspiring farmers wary of the risks who often find that the purchase of land alone is out of reach.

Over the next five years — the lifespan of the farm bill — nearly 100 million acres of farmland is expected to change ownership and will need new farmers.

Yet Isbell is one of many farmers hoping that his kids will someday take over the family business. "They have to be called to do that, not forced to."