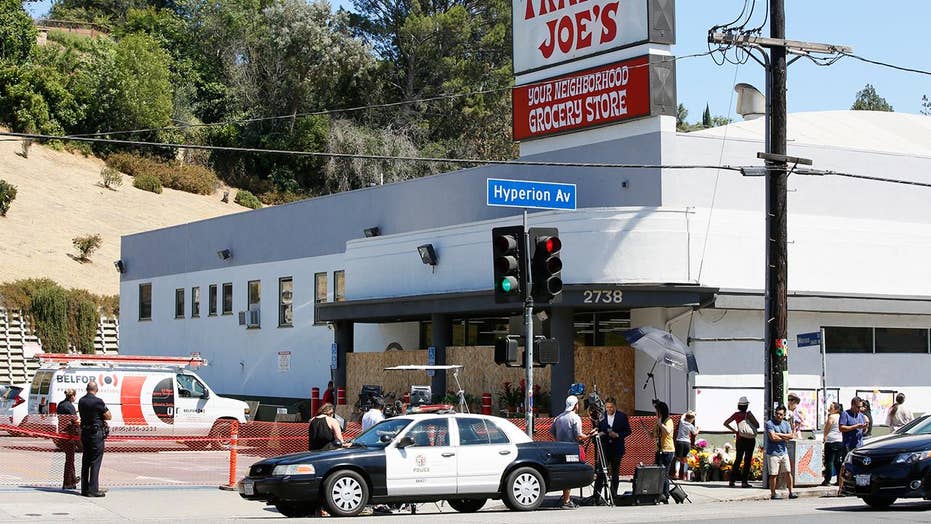 Investigators say the gunman shot his grandmother and wounded his girlfriend before taking dozens hostage inside a Los Angeles supermarket; William La Jeunesse on the timeline of events.

The alleged Trader Joe’s gunman in California had been feuding with his 76-year-old grandmother for weeks before he pulled the trigger Saturday, a family member said.

Gene Evin Atkins allegedly got mad at his grandmother that day when she complained there were too many television sets on, the suspect’s cousin, Charlene Egland, told The Associated Press.

Gene Evin Atkins, 28, allegedly shot his grandmother after weeks of feuding with her, the suspect's cousin said. (AP)

Atkins, 28, was booked on suspicion of murder after he walked out of the Silver Lake supermarket Saturday evening, ending an hours-long standoff that began inside his south Los Angeles home.

Egland recalled walking toward the house when she heard about six gunshots. Another cousin who lives in the house came running from the porch and shouted to Egland, "I think Gene shot my mama!"

Family members said the shooting stemmed from feuding that began two to three weeks ago. Atkins had been arguing with his grandmother over his girlfriend, who was staying at their home, according to Egland.

At least one person was killed when the gunman ran into the store, barricaded himself and held dozens hostage. (AP) (Copyright 2018 The Associated Press. All rights reserved)

"He didn't seem right to me," Egland said. "[The grandmother] didn't want the girl over there anymore.”

Atkins shot the grandmother several times before a bullet grazed his girlfriend’s head, police said. The girlfriend's injury was not life threatening.

Egland said by time she went to get help, Atkins had forced his girlfriend into his grandmother’s car and drove away. He eventually crashed the vehicle into a pole outside the Trader Joe’s before running inside the supermarket and holding dozens of people hostage.

One store employee, Melyda Corado, 27, was shot and killed when Atkins and police officers exchanged gunfire.

The hostage situation ended when the gunman agreed to walk out of the store. (AP) (Copyright 2018 The Associated Press. All rights reserved)

"I'm sad to say she didn't make it. My baby sister. My world," her brother Albert Corado said on Twitter.

Atkins, who has two daughters, bounced between several jobs, including working as a security guard, but had been repeatedly fired, Egland said.

His grandmother had tried to help him find employment and "was just trying to make him do better," she said.

The grandmother underwent surgery to treat the gunshot wounds. She remains in critical condition, but was improving on Sunday.