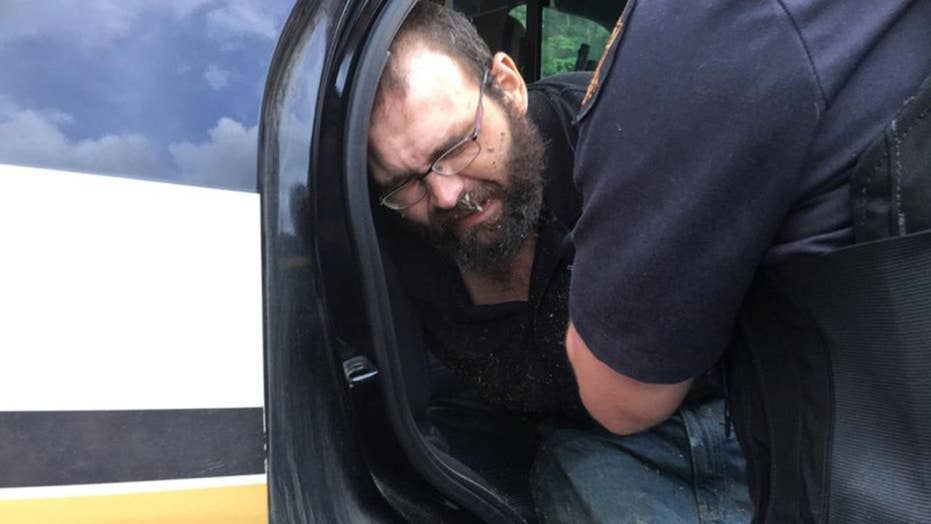 Tennessee manhunt for suspected cop killer is over

Steven Wiggins is accused of shooting and killing a sheriff's deputy in Tennessee.

The man accused of killing a Tennessee sheriff’s deputy was captured Friday after a three-day dragnet, officials said.

The Tennessee Bureau of Investigation tweeted photos of Steven Joshua Wiggins, 31, appearing disheveled with ripped clothing and hanging out in the back of a cruiser.

Authorities launched a manhunt Wednesday after Dickson County Sheriff’s Sgt. Daniel Baker was killed after responding to a call about a suspicious car. The deputy’s vehicle was eventually tracked by GPS to a wooded area about 3 miles away, with Baker dead inside.

A video recording enabled them to identify Wiggins as the suspect in the murder, TBI officials said.

Wiggins was discovered by a Tennessee Highway Patrol trooper near where the shooting occurred, the Tennessean reported, citing the Hickman County Sheriff’s Office.

Wiggins was already wanted on several charges after he allegedly assaulted a woman and made off with her car, the Kingston Springs Police Department said. The woman was in the car with Wiggins when he alleged killed Baker and she was arrested on a murder charge, officials said.

Erika Castro-Miles told police Tuesday that Wiggins slapped her in the face and pulled out some of her hair, then put a gun to her head and threatened to kill her if she called the cops, authorities said. She said Wiggins then grabbed her keys and took the car without her permission.

Castro-Miles alleged that Wiggins was “doing meth all night and smoking marijuana” when she talked to police, officials said.