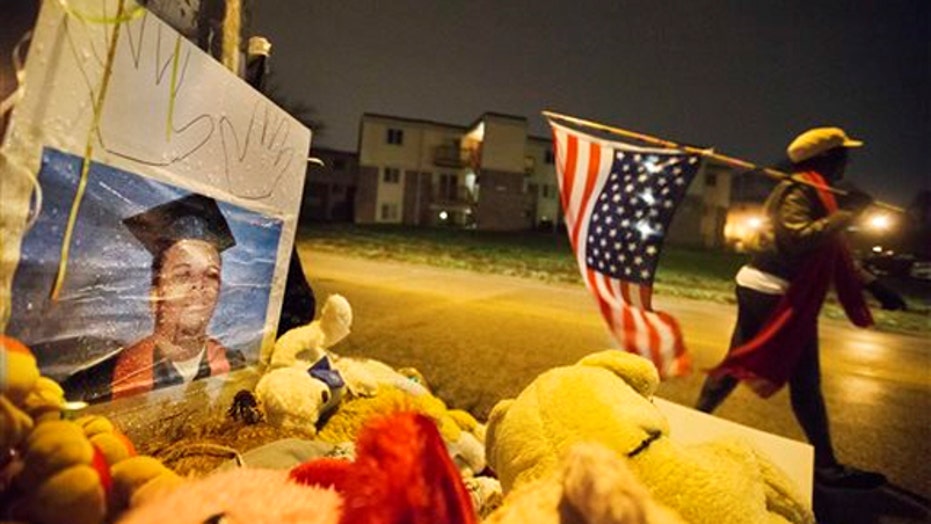 Authorities appeal for calm ahead of grand jury decision

Authorities in St. Louis County, Mo. continued preparations ahead of an expected grand jury decision on whether to charge a white police officer for the fatal August 9 shooting of a black teen in Ferguson.

Barricades have been placed around the St. Louis County Justice Center in Clayton, where the grand jury has been meeting and parking restrictions that were put into effect over the weekend are expected to remain in place Monday.

Some expected a decision to be announced this past weekend, but it did not come to pass. The grand jury was expected to reconvene Monday, but there has been no official confirmation that will be the case. The 12-person grand jury sets its own schedule depending upon when the members are available.

The lack of a decision and a scarcity of official communication about the case has left nerves frayed and many anticipating unrest no matter what the outcome.

Protesting on Sunday night, Reggie Cunningham said he doubted police officer Darren Wilson will be indicted and it seemed authorities were delaying an announcement "to spin this in the most positive way possible."

The more that they drag this out, the angrier people are going to be," said Cunningham, 30, of St. Louis.

The shooting triggered riots and looting, and police responded with armored vehicles and tear gas. Since then, police have eased their response, but the protests have kept up.

On Sunday evening, about 125 protesters marched through the Shaw area of St. Louis, near where a black teen was shot by an off-duty police officer working as a security guard last month. No charges have been filed in that case. Meanwhile, in Ferguson itself, police arrested two demonstrators outside the town's police department. A police spokesman said that the men were arrested for disobeying orders to disperse.

Benjamin Crump, an attorney for Brown's family, said they are frustrated the prosecutor didn't charge Wilson himself, or at least suggest a charge to grand jurors.

As it is, "you don't have any direction, you're just putting all the evidence out there and you're going to let them figure it out and they can make up their own minds," Crump said. "You know, it just boggles the mind why he thinks this is fair."

It's not uncommon for deliberations to take a while in complex cases when, such as in the Brown shooting, self-defense is alleged or there are two widely conflicting versions of events, said Cole County Prosecutor Mark Richardson, who is not involved in the Ferguson case.

"In the course of their deliberations, if one grand juror convinces the others that 'Look, we need to hear from an additional witness,' and they all agree, the prosecutor's got a duty to bring that witness in," Richardson said.

Sunday would have been an opportune time to minimize disruptions from protests, since schools and governments are planning on only a partial work week because of Thanksgiving, said Peter Joy, a law professor at Washington University in St. Louis. He said Monday or Tuesday would still make sense.

But "my belief is that with the holiday, releasing it on Wednesday, Thursday or Friday would produce a negative reaction," Joy said.

During church services, some pastors encouraged their flocks not to fret.

"Everybody stand to your feet and tell somebody, 'Don't be afraid. God is still in control,'" Jones said as church members repeated after him.

The Rev. Freddy Clark of Shalom Church in nearby Florissant told the mostly black interdenominational congregation that "justice will be served" whichever way the decision goes, because God will take care of it.

"None of us are pleased about what happened," said parishioner James Tatum. "Whatever the verdict is, we have to understand that's the verdict."

As they wait, some people have continued daily protests, while speculation has grown that the delays are intentional.

"People feel like it's been engineered, so that the results wouldn't come out until after the election and until the weather got cold, and it would be more difficult to protest," said Susan McGraugh, supervisor of the Criminal Defense Clinic at the Saint Louis University School of Law. "It's really adding fuel to the fire."