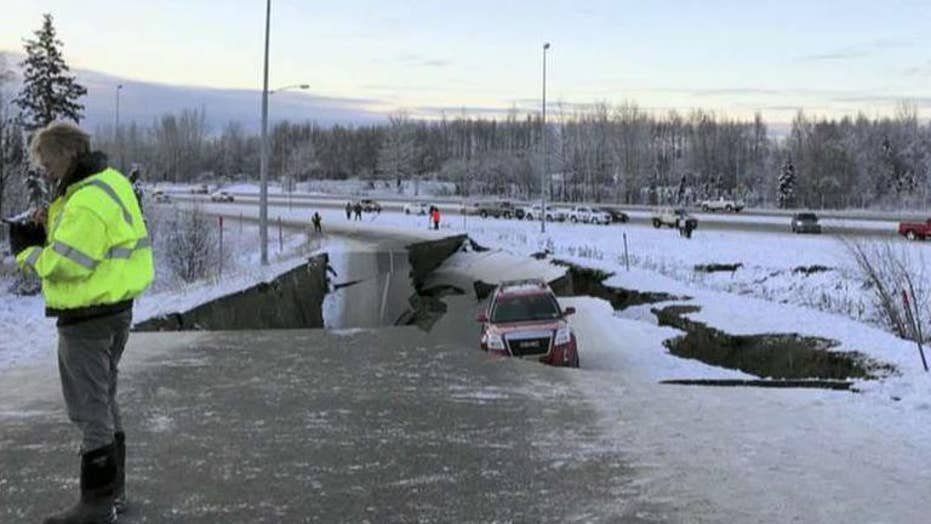 A 7.0 magnitude earthquake rocked the state of Alaska on Friday morning, churning up roads and sending office workers running to the streets in scenes locals described as pure "anarchy."

Republican Rep. Donald Young said at a press conference Friday evening that an initial assessment found that the earthquake was not deadly. “We’re quite pleased to report that there’s been no deaths at this time that we know of,” he said.

But if the news, from a casualty standpoint, was good, infrastructure was another story. Republican Sen.Lisa Murkowski said there was major concern regarding recovery efforts and safety.

“The impact is very real, the impact is very hard, and it will require apparently a great deal of recovery and effort,”’ she said. “There are homes without power. There is some concern that you may have gas line breaks that could lead to potential further disasters.”

GOP Sen. Dan Sullivan added that the state has already seen major aftershocks, “some above 5.0” magnitude.

“Make no mistake, this was a big one,” he said, citing a serious concern regarding transportation impact. “Right now the highways in and out of Anchorage, with the exception of one going up north, are cut off and that’s a big problem for us.”

Sullivan did add that despite the damage to roads and bridges, a Federal Emergency Management Agency (FEMA) administrator told state officials that there were “no reports of any major building collapse.”

This photo provided by David Harper shows merchandise that fell off the shelves during an earthquake at a store in Anchorage, Alaska, on Friday. (AP)

In one update on Friday afternoon, AP said Anchorage Police Chief Justin Doll was recounting reports that parts of a scenic highway that heads from Anchorage toward mountains and glaciers have sunken and "completely disappeared.".

He said officials were evaluating the damage to the Glenn Highway, but some was viewed as so significant that it will probably "take a long time to repair."

Doll also said damage to bridges has been reported.

An AP reporter working in downtown Anchorage saw cracks in a two-story building after the quake.

People went back inside buildings after the earthquake, but a smaller aftershock a short time later sent them running back into the streets again.

Slaton was alone and home and soaking in the bathtub when the Alaska earthquake struck.

He said the quake created a powerful back-and-forth sloshing in the bathtub and before he knew it, he'd been thrown out of the tub by the force of the waves.

His 120-pound mastiff panicked and tried to run down the stairs, but the house was swaying so much she was thrown off her feet and into a wall and tumbled to the base of the stairs, Slaton added.

A lawyer who spoke to the Associated Press called it the most "violent" earthquake he's experience in his 20 years in Anchorage.

Hank Graper says he was driving when the quake struck. He first thought his vehicle had a flat tire, then thought it was exploding. He realized it was an earthquake after he saw traffic poles swaying.

The federal Disaster Relief Fund, which has about $30 billion, should have sufficient resources for the state's immediate post-quake needs, Fox News has been told. But it will take a while to determine the scope of the damage and how much assistance may be needed later.

Murkowski, a senior member of the Appropriations Committee, told Fox the main roadways leading to and from the airport are damaged badly and cannot be repaired until spring. Most goods come into Alaska via Anchorage.

Alaska averages 40,000 earthquakes per year, with more large quakes than the other 49 states combined.

Southern Alaska has a high risk of earthquakes due to tectonic plates sliding past each other under the region. According to the U.S. Geological Survey, the Pacific plate is sliding northwestward and plunges beneath the North American plate in southern Alaska, the Alaska Peninsula and the Aleutian Islands.

On March 27, 1964, Alaska was hit by a magnitude 9.2 earthquake, the strongest recorded in U.S. history, centered about 75 miles east of Anchorage. The quake, which lasted about 4½ minutes, and the tsunami it triggered claimed about 130 lives.

As of Friday night, commercial flights in and out of Ted Stevens Anchorage International Airport had resumed, according to Murkowski. She also noted that the state’s gas pipeline had been shut down as a “precautionary” measure.