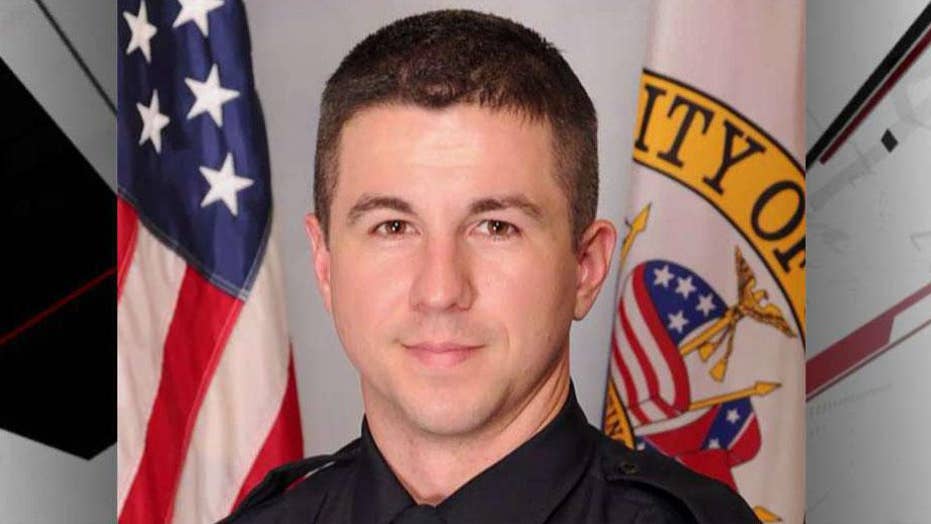 An Alabama police officer was shot and killed Sunday while following up on an investigation in Mobile and a suspect is in custody, police revealed.

Mobile Police Officer Sean Tuder "was doing some follow-up work on an investigation and was gunned down by a suspect" at the Peach Place Inn in West Mobile, Police Chief Lawrence Battiste told reporters.

The suspect, identified by Battiste as Marco Perez, is in custody, but the police chief said he didn't yet "know specifically if he's the shooter or not ... but he is a suspect at this time."

Marco Perez, 19, was identified as a suspect in the shooting death of Officer Sean Tuder on Sunday, police said. (Mobile Police Department)

Perez, according to Fox 10, was wanted by Mobile police for property theft and for allegedly filing a false police report. The 19-year-old also reportedly was sought by federal authorities for probation revocation.

Tuder was with the police department for less than five years, and "was really just getting into that part of his career where he started having a really major impact on not just the people in the community, but the men and women who work here in this department," the police chief said.

Tuder was named "Officer of the Month" in August 2017 and was praised at the time for "his numerous drug arrests, with four cases being sent for federal prosecution, and recovering six firearms."

The officer, according to Battiste, "was one of those guys that certainly resonates in your mind as somebody that's a true leader, a true commitment to doing his best in this community, to keep it safe and to be a role model for others."

Tuder's death came almost a year after another Mobile officer, Justin Billa, was shot and killed while trying to arrest a man who had killed his ex-wife.

"I don't know what's going to be the change," Battiste told reporters of losing two officers within a year. He noted that helping police identify "bad seeds" and those "wreaking the most havoc in their community" could help.