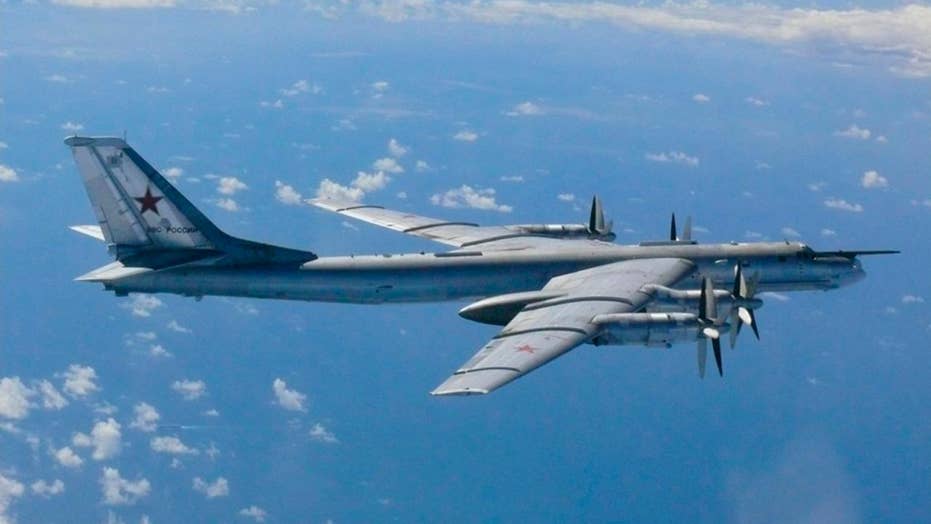 The Russian bombers that buzzed American airspace twice this week aren’t exactly state of the art, but neither was the American response in a drama that been repeated over Alaskan skies for decades.

The Tu-95 Bear bombers that flew off the Alaska coastline this week are propeller planes, not Russia's sleeker, more sophisticated TU-160 which goes roughly twice as fast though it has shorter range.

Fox News visited Joint Base Elmendorf Richardson (JBER) in November, 2015, where photos of Russian planes that have buzzed U.S. shores from the Cold War to the present line the wall along a corridor in the base, a short drive north of Anchorage.

“These intercepts are not meant to be provocative. They are not looking to escalate.”

officials explained the Russians' rationale for sending the older, slower plane toward American shores and

“The typical aircraft as you see in the pictures as you walk down the hallway is the Tu-95 Bear," said Air Force Col. Harlie Bodine, commander of the 611th Air Operations Wing. "That’s the aircraft that generally we run these intercepts against.”

A US Air Force F-22 Raptor in a hangar at Joint Base Elmendorf Richardson. (Fox News)

The very age of the bombers sends a signal that the action is not meant to threaten, he said.

“These intercepts are not meant to be provocative," Bodine said. "They are not looking to escalate.”

If the Russians send a different bomber, or a Tu-95 with fighter escorts without advance warning, it would represent a surprise both sides seek to avoid.

“If the Russians are going to send bombers with fighter escorts they realize that would be nonstandard, that would be a different tactic for them to use," Bodine said. "And that's why typically they would make us aware if that's going to be the case.”

In the second incident this week, JBER did not scramble F-22 Raptor stealth fighters.  Only a single E-3 Sentry radar aircraft took off to keep tabs on the Russian jets' movements, according to the Pentagon.

There was never a chance the Russian planes would not be immediately detected.

Air Force officials showed Fox News 15 long-range radar stations ringing Alaska that have been maintained since the Cold War, each able to comb the skies out to 250 nautical miles.

“So any air traffic coming into and out of Alaskan airspace gets detected by these radars,” Col. Frank Flores told Fox News while standing outside in -30 degree Fahrenheit weather in Cape Lisburne, Alaska, north of the Arctic Circle, just 150 miles from Russia. “The radar picks up a signal, sends it through satellite back to Anchorage, and then controllers monitor that signal, and provide information to decision makers who decide what to do next.”

Those first-line decision makers are at the North American Aerospace Defense Command (NORAD) in Anchorage.  When Fox News visited NORAD during a Russian intercept drill, technicians from the U.S. and Canada were looking at monitors with red and blue blips – Russian and American – circling each other over maps of Alaska.

“It’s our buffer between international air space prior to reaching sovereign air space, where we want to identify an aircraft so that it's not going to be a threat as it gets closer towards land,” said Sgt. Vince Rice, a NORAD weapons technician from Newfoundland, Canada.

That’s not a lot of ground to cover for a plane traveling around 400 miles per hour. Depending on the flight path, “it can take from 30 minutes up to a couple of hours” to cover the distance, said Rice.

Every minute of every day of the year, the U.S. Air Force keeps an alert cell of F-22 stealth fighters on station at JBER, “postured to respond to any type of threat to our sovereignty,” said Bodine.

During the 2015 visit, the Air Force showed Fox News what a response to a Russian Bear intercept would look like. It was a flurry of flashing blue lights, sirens, airmen running and pilots sliding down a fire poll. Seconds count, because of the need to get to the Russians planes before they cross the distance from the ADIZ to our sovereign ground.

“It takes a lot of time to get out there, so every second that we can make up on the ground we can get closer to whatever is out there,” said Col. Dave Piffererio, a F-22 pilot commanding the alert cell that day.  The F-22’s are fully armed and ready to go at a moment’s notice.

During an intercept, a 25-airman team aboard an E-3 Sentry AWACS radar plane provides command and control for the F-22 fighters. During the drill, technicians were clearly planning for a Russian intercept.

“We're going to be looking at MIG-29s, SU-34s. So I'm going to get up to bandit for MIG-29s and Neutrals for the SU-34s, representing those Russian aircraft,” said one technician as the plane backed out amid klaxons.

But there are concerns the E-3, a Cold War era platform, is old and vulnerable.

“The technology that we have on the aircraft is probably '80s technology and we're starting to modernize,” said Lt. Col. Eric Gonzalez. “It is an old airframe. What makes this very capable, though, is not necessarily the equipment. It's the training that we receive to employ that equipment in an awesome manner.”

As for the F-22s, the Air Force has stopped production at 187 aircraft, far below the number originally envisioned during the Cold War.

“It's tough when they shut down a line,” said Piffarerio. “You could probably ask any combatant commander, and the demand is out there.”

Washington has looked at scrapping and upgrading from the E-3s and even re-starting F-22 production, but no decisions have been made.

Washington has also not concluded what we’re facing with the Russians is tantamount to a new Cold War, something Bodine was mindful of two years ago.

“We have some of the most amazing individuals who have been labelled before as the 'most clairvoyant,'" Bodine said. "They're able to constantly study this environment, constantly study not only Russia, but what other countries are doing in the Arctic, to gain a better insight to what might be coming around the corner and what the future might hold.”

Many of the service members Fox News spoke to brought up Col. Billy Mitchell, the father of the U.S. Air Force, and one of the most influential military leaders in history.

“Billy Mitchell was one of the first ones to say that Alaska is the most strategic place on this Earth,” said Piffarerio. “You can get to basically anywhere in the Northern Hemisphere inside of 12 hours.”