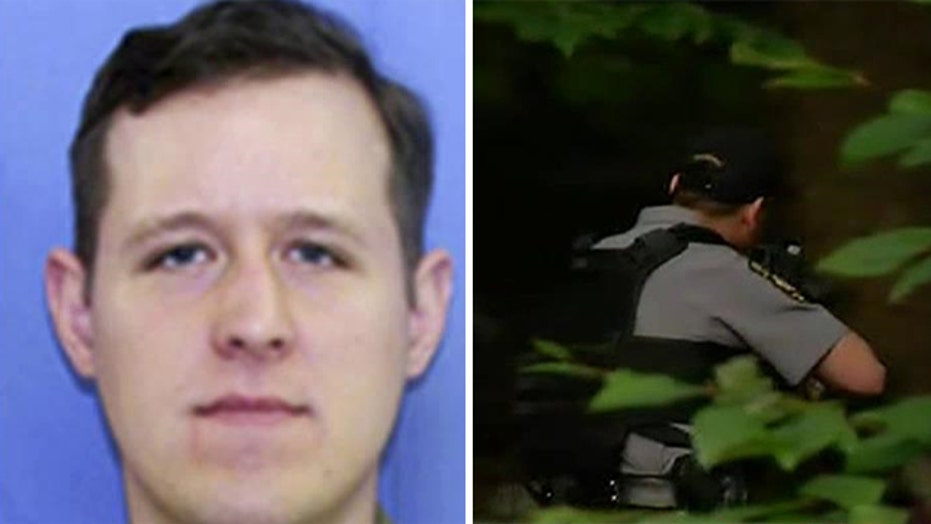 Manhunt still under way for suspect in Pa. trooper shooting

CANADENSIS, Pa. – Nine days after a gunman opened fire in a deadly ambush at a state police barracks, authorities have had no contact with the suspect they describe as a self-taught survivalist despite an intensive search that shut down the heavily wooded community where he lived with his parents.

Though a shelter-in-place order had been lifted in the Pocono Mountains community where police have focused their search, they continued to urge residents to be vigilant Sunday as the manhunt continues for Eric Frein.

A state police spokesman said no contact had been made with Frein, who was placed on the FBI's Most Wanted list after the Sept. 12 shooting at a nearby police barracks that left one trooper dead and a second wounded.

Police on Friday descended on the community where Frein, 31, had lived with his parents, ordering residents to stay inside their homes and preventing anyone outside the neighborhood from returning to their homes. Law enforcement officers wearing bulletproof vests and armed with rifles scoured the woods as helicopters buzzed overhead.

Late Saturday night, police lifted their order to stay inside but urged residents to keep doors locked, keep their yards well-lit and report suspicious persons or vehicles. They should also stay out of the dense, boggy woodlands where the search was underway, authorities said.

On Sunday, some residents began getting out of their homes for the first time since Thursday.

"Basically, we were locked in our own house," said Lukasz Drozdzewski, who was washing clothes at a nearby laundromat with his wife and three young sons. "Today's the first day we've been out."

Drozdzewski lost a day of pay Friday when he couldn't drive to work. His sons' school was closed Thursday and Friday because of the manhunt.

Drozdzewski is a little worried for his family's safety, he said, but is ready for life to go on.

"I'm not going to change my life because of one person," he said.

Though police described Frein as a survivalist with a grudge against police, some who know him said he has not always played the loner.

Frein joined a group that performed military re-enactments of Eastern European conflicts in the modern era and played a small role in a 2007 movie about a concentration camp survivor -- earning him a mention in the movie database IMDb. He also helped with props and historical references on a documentary about World War I.

"He was a very friendly guy to me," said Jeremiah Hornbaker, who hired him for the documentary. "We left on very good terms."

Frein's father, retired Army Maj. E. Michael Frein, told police that he had taught his son to shoot. He "doesn't miss," the father told state police during a search of the family home, when he also disclosed that an AK-47 and a .308 rifle with a scope were missing. A copy of the book, "Sniper Training and Employment," was found in his bedroom.

Frein's only known legal problems stemmed from the 2004 theft of some vendor items at a World War II re-enactment in Odessa, New York. He failed to show for his trial, and was arrested in Pennsylvania as a fugitive from justice.

The FBI's Most Wanted poster describes him as 6-foot-1, 165 pounds. State police said he apparently cut his hair into a wide Mohawk in preparation for the attack. He was also described as a heavy smoker.

Trooper Tom Kelly, a state police spokesman, said a report of gunfire on Friday night was not linked to the search.