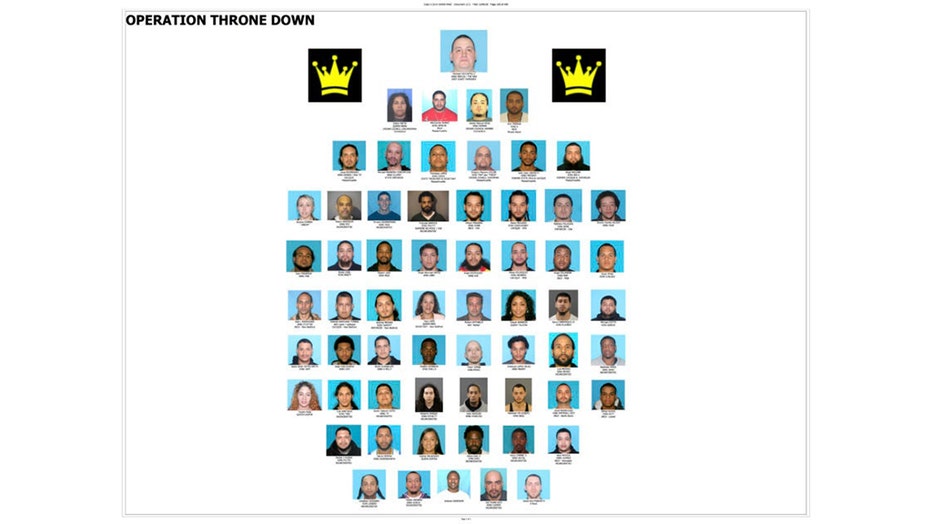 More than 60 members of the Latin Kings are facing federal charges after the FBI and other agencies took part in a wide-spread bust on Thursday morning, according to officials.

Members of the gang's East Coast leadership were among those charged in what Joseph Bonavolonta, the special agent in charge of the FBI's Boston division, said was the "largest takedown" in their office's history.

The bust, called "Operation Throne Down," was carried out after nearly four years of infiltration by law enforcement, who recorded high-level conversations through informants and social media posts that could implicate the members, according to Boston.com.

Over 60 members of the Latin Kings are facing federal charges after the FBI and other agencies took part in a wide-spread bust on Thursday morning, according to officials. (Massachusetts U.S. Attorney's office)

Nine of them are in custody, while eight are now fugitives, according to the outlet.

Gang members were reportedly monitored on social media wearing colors of the Latin Kings, flashing gang signs and rapping about drugs or murder in a series of YouTube rap videos. Other videos were reportedly shot at locations where members of the gang were murdered and officials believe some of the lyrics mentioned shooting other gang members, according to Boston.com

“To get at gang leadership, you almost always need a highly placed cooperating source,” Massachusetts U.S. Attorney Andrew Lelling said at a press conference. “If you don’t have that, it’s very difficult to get the leaders.”

Lelling said they gained an understanding of the gang's violent ways gradually throughout the investigation.

"Time after time, we uncovered their planning of brazen acts of violence against those who ran afoul of the gang's manifesto and constitution," he said, according to the outlet.

During Thursday's arrests in Massachusetts, police seized dozens of firearms, including machine guns and sawed-off shotguns, as well as six cars, six motorcycles, three jet skis, an ATV, drugs and $38,000.

“Having taken out most of the leadership, it’s extremely difficult for the gang to regroup in this region” any time soon, Lelling told Boston.com. “It puts us a step ahead of them regionally -- for once.”