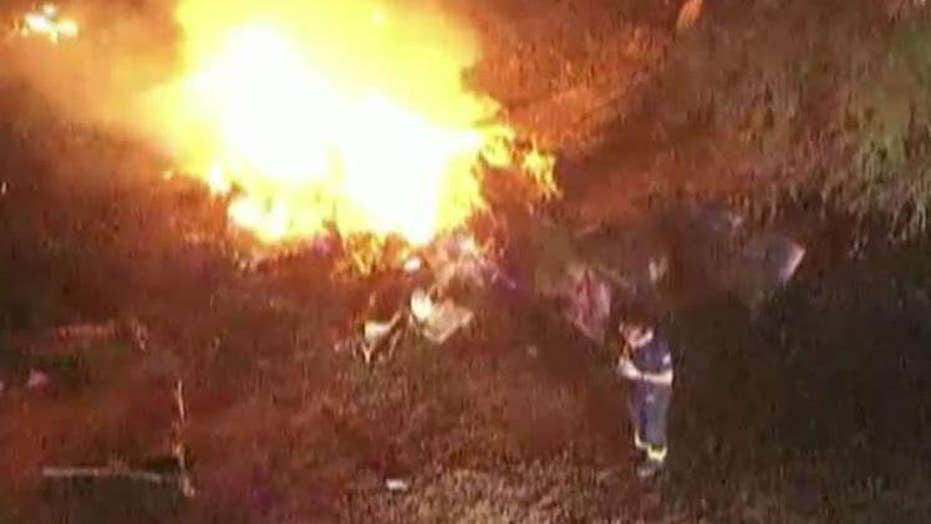 Plane went down shortly after takeoff in Arizona.

There were no survivors among the passengers and crew after the plane went down at 8:45 p.m. on the Champions Course, located just north of the Scottsdale Airport, the Scottsdale Police Department said in a statement to Fox News.

The names of the victims were not immediately released, pending identification and notification of family members, police said.

The National Transportation Safety Board arrived at the scene of the crash and is investigating.

Six people were killed after a small plane crashed shortly after takeoff in Scottsdale, Ariz. on Monday. (FOX10)

The crash happened on the sister golf course to the Stadium Course, where the PGA holds the Waste Management Phoenix Open each February. There were no reports of injuries to people on the ground, according to Gregor.

Versace King told the Arizona Republic he was helping his father load a truck near the airport and noticed the small plane take off. He then heard the plane stall, which was soon followed by a loud noise and subsequent explosion.

The plane crashed at a golf course outside of Phoenix, but there were no reports of injuries to people on the ground. (FOX10)

“I was like, ‘What the heck?’ So I drove over to the golf course and I saw the plane was engulfed in flames,” he told the newspaper.

Arizona Gov. Doug Ducey tweeted his prayers "for those lost" in the crash.

"Our hearts are with their families and loved ones this morning," he wrote.