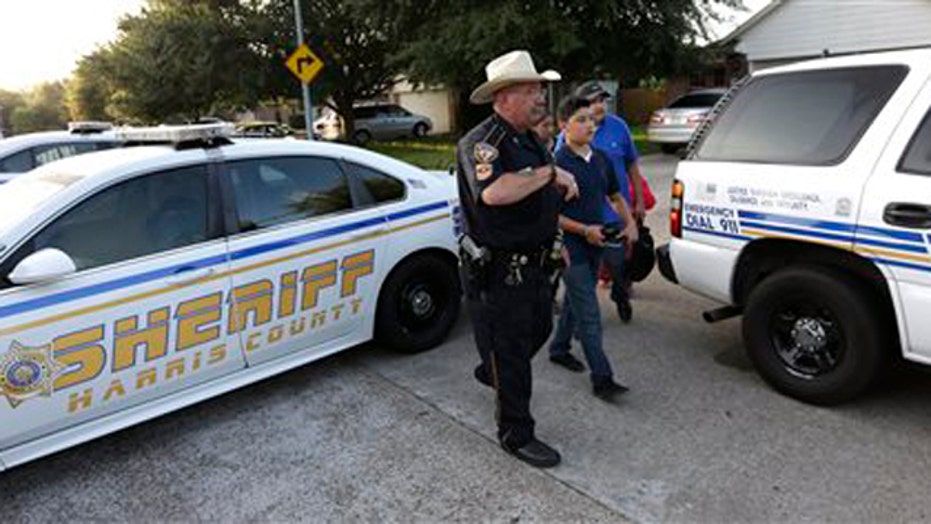 Gunman surrenders after shooting at police

A dispute involving the alleged gunman and a "former domestic partner" is being cited as a possible motive in the shooting death of six kids and two adults in a Houston-area home, Texas authorities said Sunday.

David Conley, 48, is charged with capital murder in the deaths and is set to make his first court appearance Monday morning before a trial judge. Conley, who is being held in the Harris County Jail and doesn't yet have an attorney, didn't appear at a court hearing Sunday at which he was denied bond.

Deputies were called to the home about 9 p.m. Saturday to perform a welfare check requested by a relative, police said. Deputies later received information indicating that a man inside the home was wanted on a warrant for aggravated assault on a family member.

While waiting for a High Risk Operations Unit to arrive, deputies spotted the body of a juvenile through a window. Four deputies forced their way into the home, prompting the suspect inside to begin shooting. Deputies pulled back and waited for the operations unit to arrive. The man surrendered several hours later.

Six children -- aged 6, 7, 9, 10, 11 and 13 -- and two adults were found dead of gunshot wounds inside three bedrooms. Two of the kids and one of the adults who died were female. Metal handcuffs were allegedly used to restrain some of the deceased, authorities said. Some of the dead had been shot multiple times.

Conley reportedly had a prior relationship with Valerie Jackson, 40, one of the deceased, according to Sgt. Craig Clopton. Clopton said at least one of the children found dead in the house was likely fathered by Conley.

The dead were identified as Dewayne Jackson, 50; his wife, Valerie Jackson, 40; and their children Dewayne, 10; Honesty, 11; Caleb, 9; Trinity, 7; and Jonah, 6. Also killed was a 13-year-old, Nathaniel, who was believed to be Conley's son from the relationship with Valerie Jackson. The sheriff's office had earlier said that there were three adults and five children killed.

“We do not and cannot comprehend the motivation of an individual that would take the lives of so many innocent people,” Cannon said.

Court records show Conley's criminal history dates back until at least 1988, with the most recent incident last month, when he was charged with the assault of a family member. In court documents, authorities say the suspect had been arrested for allegedly assaulting the woman he was living with at the home where the bodies were found.

Court documents say that in the incident last month Conley pushed the woman's head against a refrigerator multiple times after she tried to stop him from disciplining her son with a belt. The case was still pending.

In 2013, he was charged with aggravated assault for threatening the same woman with a knife. He pleaded guilty and was sentenced to nine months in the county jail.

In 2000, he was arrested for retaliation, accused of putting a knife to his then-girlfriend, threatening to kill her, her baby and himself. That came after she filed an assault charge for cutting her with a knife and punching her in the face. He was sentenced to five years in prison for retaliation.

Jackson had recently changed the locks on the house, but she did not have an active restraining order against Conley, Clopton said.

Spokeswoman Estella Olguin said Sunday that a preliminary review found the previous involvement. She said an internal review was under way by their Office of Child Safety to evaluate "any prior contacts with the family to ensure they were handled appropriately." She had no further details Sunday afternoon.

The area around the home was still cordoned off Sunday morning, with sheriff's deputies coming in and out of the house and the medical examiner's office having arrived at the scene. By late Sunday morning, authorities had begun removing bodies from the home.

Alan Cartagena, 19, said he was attending a barbecue at a home a couple houses away. About 11 p.m., he said, deputies started going around the neighborhood knocking on doors.

"Cops were walking around with their handguns out, telling people to remain in their houses. They were also telling them to evacuate. It was extremely scary," he said.

Cartagena said he heard one gunshot but wasn't sure if there were more.

Neighbor Dalila Mercado says when she arrived home Saturday night officers had already blocked off the area. She said she was sitting in her driveway when she heard gunshots coming from the house and officials then told her and her family to go inside their home.

Mercado said she could still see from her bedroom window and watched as a man was escorted out of the house after midnight. She said officials then had him next to her fence, taking fingerprints and photographs.

"It was shocking. I haven't slept all night," she said.

Mercado says she didn't know the residents of the house well, but would occasionally say hello to a woman and see children waiting to catch the school bus. She said she didn't recognize the man taken out of the house.