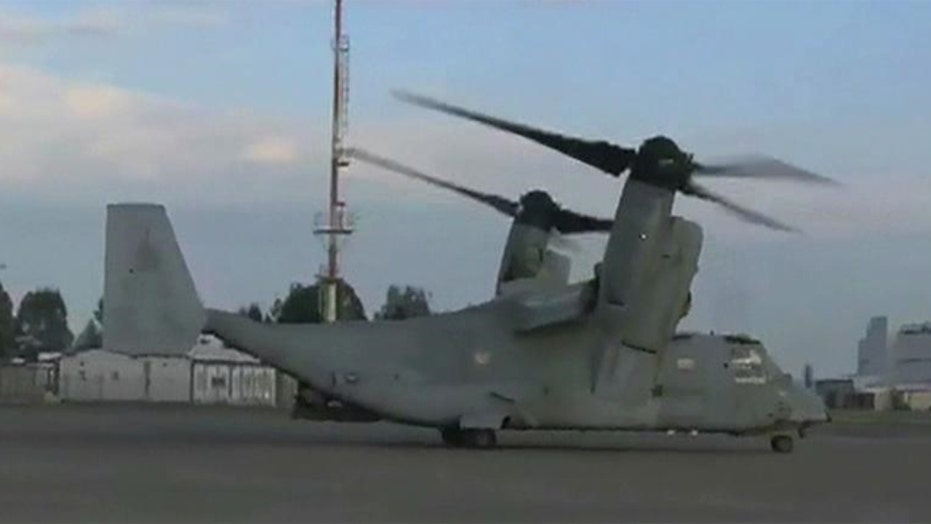 US aircraft hit by gunfire in South Sudan

The U.S. military aircraft were heading to Bor, the capital of the state of Jonglei and scene of some of the nation's worst violence over the last week. One American service member was reported to be in critical condition.

The U.S. military's Africa Command said the hit aircraft was "participating in a mission to evacuate American citizens in Bor."

"After receiving fire from the ground while approaching the site, the aircraft diverted to an airfield outside the country and aborted the mission," the statement said. "The injured troops are being treated for their wounds."

Two officials told The Associated Press that after the aircraft took incoming fire, they turned around and flew to Kampala, Uganda. From there the service members were flown on to Nairobi, Kenya for medical treatment. The two officials are in East Africa and demanded anonymity to share information not made public.

There were injuries sustained on more than one US Osprey.  So there were at least 2 aircraft that took small arms fire. 3 of these injuries were described as non life-threatening and one "serious" injury.

South Sudan's military spokesman, Col. Philip Aguer, said that government troops are not in control of Bor, so the attack on the U.S. aircraft has to be blamed on renegade soldiers, he said.

"Bor is under the control of the forces of Riek Machar," Aguer said.

"There is fighting going on in Bor town, yes, because since (Saturday) morning they have continued to attack the civilian population," he said, talking about renegade troops. "They have gone as far as not respecting the U.N. compound."

He said fighting started early Saturday after reports came in that rebels there were shooting indiscriminately at civilians.

"The bodies are sprinkled all over the town," he said. No death toll could be estimated, he said.

South Sudan President Kiir, an ethnic Dinka, said this week that an attempted coup triggered the violence now pulsing through South Sudan. He blamed the former vice president, Machar, an ethnic Nuer.  But officials have since said a fight between Dinka and Nuer members of the presidential guard triggered the initial violence late Sunday night. Machar's ouster from the country's No. 2 political position earlier this year had stoked ethnic tensions.

The violence has killed hundreds and has world leaders worried that a full-blown civil war could ignite in South Sudan. The south fought a decades-long war with Sudan before a 2005 peace deal resulted in a 2011 referendum that saw South Sudan break away from the north, taking most of the region's oil wealth with it.

Lueth described Machar as "the rebel leader," saying the forces that control Bor believe they are fighting on his behalf. Machar's whereabouts remain unknown, but he has said in recent interviews that he is in hiding somewhere in South Sudan.

An International Crisis Group expert on South Sudan told The Associated Press on Friday that rebels have taken control of at least some of South Sudan's oil fields, an issue that could bring Sudan into the conflict. South Sudan's oil flows north through Sudan's pipelines, providing Khartoum with much needed income.

The U.N. Security Council on Friday said the weeklong violence resulted from a "political dispute among the country's political leaders" that could affect not only South Sudan, but neighboring countries and the entire region.