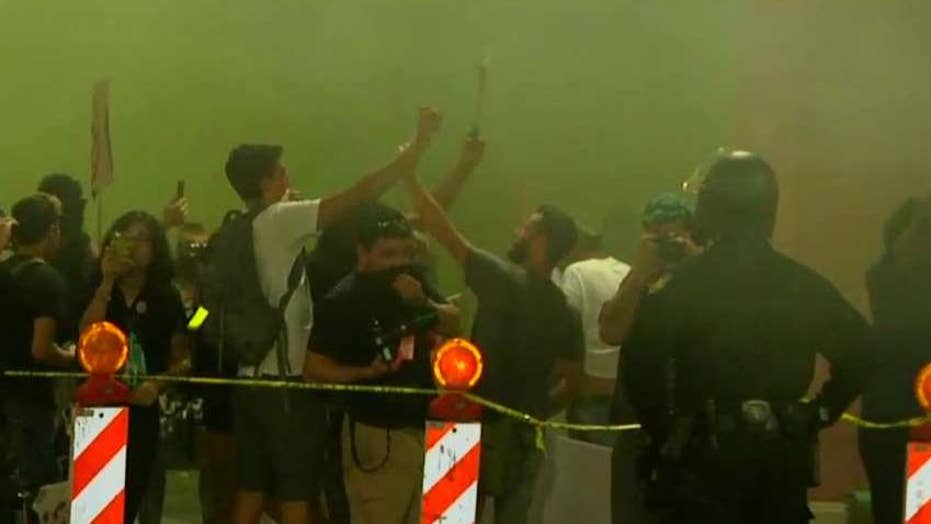 A fourth person was arrested on charges related to a protest after President Trump's speech at the Phoenix Convention Center had ended Tuesday night, Phoenix police said.

Those four arrests plus one arrest of a person on an unrelated warrant bring the total number of arrests at the protest to five.

A contingent of protesters stayed behind after the clash with police had ended. Their numbers were small.

Police lobbied what they say is pepper spray at protesters who threw rocks and water bottles at them as Trump's rally broke up. Clouds of the gas filled the night air as the president's supporters began leaving the downtown Phoenix Convention Center.

There were no immediate reports of injuries, but It was the closest to violence seen all evening.

The demonstrations were largely peaceful as police kept the protesters and Trump supporters on opposite sides of the street behind barricades and a line of officers.

At one point, a half-dozen people carrying military-style rifles and dressed in fatigues joined the protesters. Members of the group, who called themselves the Redneck Revolt, described themselves as an anti-fascist group who were offended by the president's policies and comments in the aftermath of the Charlottesville violence.