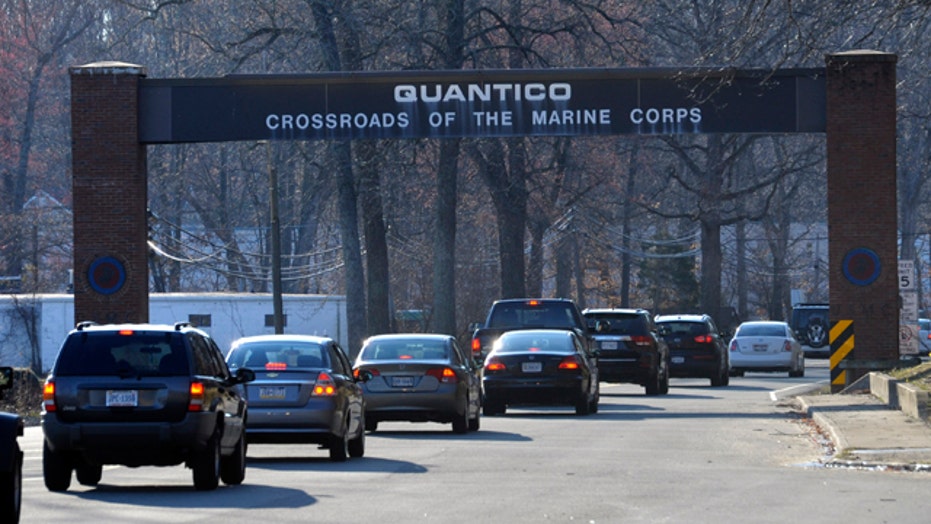 Authorities investigate shooting at Quantico Marine base in Virginia

Authorities say an active-duty Marine shot and killed two fellow service members at Marine Corps Base Quantico in Virginia before killing himself.

Investigators say the male shooter was found dead of a self inflicted gunshot wound and two others, one man and one woman, were pronounced dead at the scene.

The shooter and the two victims were all identified as active duty Marines, but their names were not released pending family notification. Sgt. Christopher Zahn tells Fox News authorities cannot yet speculate on a motive for the killings.

Authorities were called to the scene around 10:30 p.m. Thursday where they found one Marine dead at a barracks, base commander Col. David W. Maxwell told reporters. Authorities later found a second victim dead, along with the body of the suspected gunman, who died of a self-inflicted gunshot wound.

MyFoxDC.com reports authorities believe the suspect was a staff member at the officer candidate school on the base.

A base spokesman initially described the situation as a standoff. Maxwell said later in the morning that there was no standoff. Base spokesman Lt. Agustin Solivan later clarified that after the first shooting, police had the shooter "isolated" in a barracks dorm room at the base's Officer Candidates School. Solivan the shooting was isolated to the school and authorities were confident there were no other casualties.

The base was put on lockdown after the shooting but the lockdown was lifted early Friday. During the lockdown, residents were warned to stay inside.

A post on the base's Facebook page had urged residents to stay inside with their doors locked and follow any instructions from the base intercom system.

The base, which is about 37 miles south of Washington, is also home to the FBI's training academy. Its Officer Candidates School is the equivalent of basic training for Marines interested in becoming officers.

The shooting is the second tragedy the Marine Corps has faced this week. Seven members of the 2nd Marine Expeditionary Force were killed Monday when a mortar shell exploded in its firing tube during an exercise at Hawthorne Army Depot in Nevada, Eight others were injured.

In a statement, Pentagon press secretary George Little said Defense Secretary Chuck Hagen was saddened to learn of the shooting.

"This tragedy, as well as the tragedy in Nevada earlier this week, took the lives of Marines who volunteered to serve their nation," Little said.

In 2010, the Quantico base was one of several targets of an ex-Marine reservist who, during five nighttime shootings, fired on military targets including the Pentagon. Yonathan Melaku, on two separate occasions fired at the National Museum of the Marine Corps in Quantico. No one was injured and Melaku was ultimately sentenced to 25 years in prison.