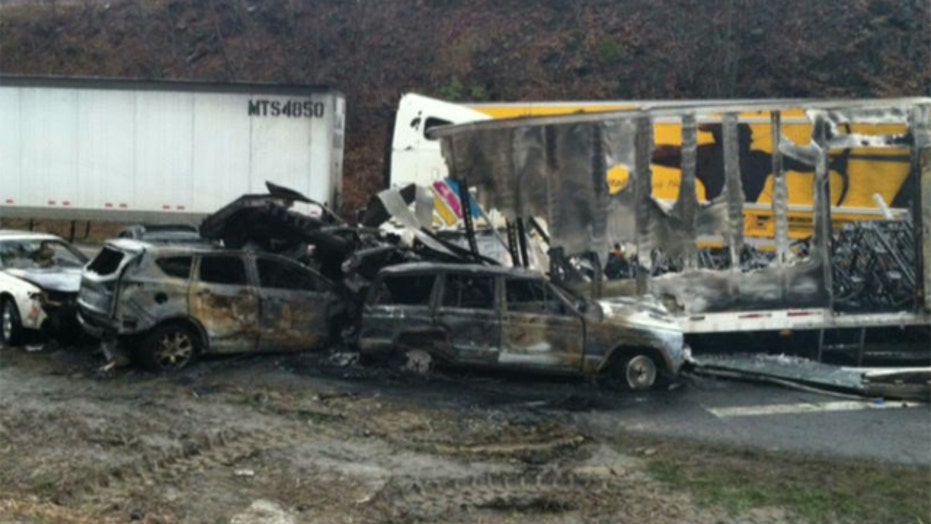 3 Killed in 75 vehicle crash in Virginia

GALAX, Va. – Interstate 77 near the Virginia-North Carolina reopened early Monday following a series of chain-reaction wrecks involving nearly 100 vehicles along a mountainous, foggy stretch of the highway, killing three people and injured 25 others.

Virginia State Police determined 95 vehicles wrecked in 17 separate crashes within a mile span near the base of Fancy Gap Mountain, spokeswoman Corinne Geller said. The crashes began around 1:15 p.m. Sunday when there was heavy fog in the area.

"This mountain is notorious for fog banks. They have advance signs warning people. But the problem is, people are seeing well and suddenly they're in a fog bank," said Glen Sage of the American Red Cross office in the town of Galax.

Since 1997, there have been at least six such pileups on the mountain but Sunday's crash was the most deadly, according to The Roanoke Times. Two people died in crashes involving dozens of vehicles in both 2000 and 2010.

State police said traffic along the interstate in southwest Virginia backed up for about 8 miles in the southbound lanes after the accidents. Authorities closed the northbound lanes so that fire trucks, ambulances and police could get to the wrecked vehicles.

Overhead message boards warned drivers since about 6 a.m. Sunday to slow down because of the severe fog, Geller said. The crashes were mostly caused by drivers going too fast for conditions.

At the "epicenter" was a wreck involving up to eight vehicles, some of which caught fire, Geller said. Photos from the accident scene showed a burned out tractor-trailer and several crumpled vehicles badly charred. Those taken to hospitals had injuries ranging from serious to minor.

Nina Rose, 20, and her mother, were driving home to Rochester, N.Y., when they encountered the pileup.

"With so much fog we didn't see much around it," Rose told the Roanoke newspaper. "As we got further up we just saw a bunch of people standing on the median, just with their kids and families all together. There were cars smashed into other cars, and cars just underneath other semi-trucks."

Police did not immediately release the names of those killed.