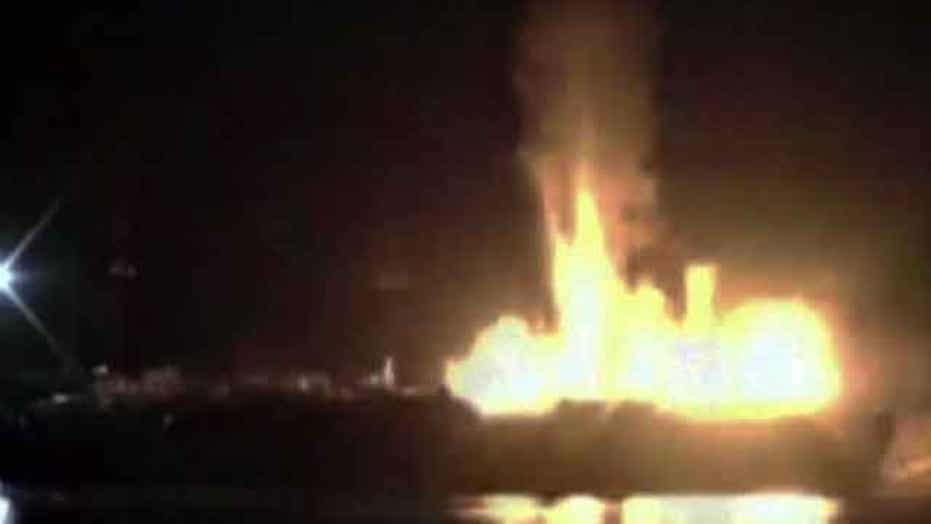 MOBILE, Ala. – Firefighters on Thursday extinguished a huge blaze that erupted hours earlier when two fuel barges exploded in Mobile, Ala., leaving three people with critical burns and forcing the evacuation of crew from a nearby cruise ship.

The cause of the fire, which started Wednesday night, was likely started from a spark during its cleaning, the U.S. Coast Guard said.

Firefighters from Mobile and Coast Guard officials responded after 8:30 p.m. CDT Wednesday to a pair of explosions involving the gas barges in the Mobile River east of downtown. Additional explosions followed over the next few hours.

Across the river, the Carnival Triumph, the cruise ship that became disabled in the Gulf of Mexico last February before it was towed to Mobile's port, was evacuated, said Alan Waugh, who lives at the Fort Conde Inn in downtown Mobile, across the river from the scene of the explosions. Waugh saw the blasts and said throngs of Carnival employees and others were clustered on streets leading toward the river as authorities evacuated the shipyard.

"It literally sounded like bombs going off around. The sky just lit up in orange and red," he said, "We could smell something in the air, we didn't know if it was gas or smoke." Waugh said he could feel the heat from the explosion and when he came back inside, his partner noticed he had what appeared to be black soot on his face.

Video from WALA-TV (http://bit.ly/15NEYJl) showed flames engulfing a large section of the barge, and a video that a bystander sent to AL.com (http://bit.ly/13vWz4G) showed the fiery explosions and billowing smoke over the river.

The initial blast took place in a ship channel near the George C. Wallace Tunnel -- which carries traffic from Interstate 10 under the Mobile River, Vega said. The river runs south past Mobile and into Mobile Bay, which in turn flows into the Gulf of Mexico.

The tunnels were still open and operating, Mobile fire officials said in a statement.

As daybreak approached, the Mobile Fire-Rescue Department's fireboat Phoenix was moving toward the barges, checking to make sure their mooring lines were secured, the fire department said in a statement.

The cause of the explosion was not immediately clear, Huffman and Vega said.

"Once (the fire) is out and safe, a full investigation will take place," Huffman wrote.

Mobile Fire Chief Steve Dean told AL.com he was confident the fire wouldn't spread to nearby industrial properties, including the shipyard where the Carnival cruise ship is docked.

Huffman said the ship is directly across the river from the incident -- about two football fields in length.

The barges are owned by Houston-based Kirby Inland Marine, company spokesman Greg Beuerman said. He said the barges were empty and being cleaned at the Oil Recovery Co. facility when the incident began. He said the barges had been carrying a liquid called natural gasoline -- which he said is neither liquefied natural gas or natural gas. He said the company has dispatched a team to work with investigators to determine what caused the fire.

The explosion comes two months after the 900-foot-long Carnival Triumph was towed to Mobile after becoming disabled on the Gulf during a cruise by an engine room fire, leaving thousands of passengers to endure cold food, unsanitary conditions and power outages for several days. The ship is still undergoing repairs there, with many workers living on board.

Earlier this month, the cruise ship was dislodged from its mooring by a windstorm that also caused, in a separate incident, two shipyard workers to fall into Mobile Bay. While one worker was rescued, the other's body was pulled from the water more than a week later.