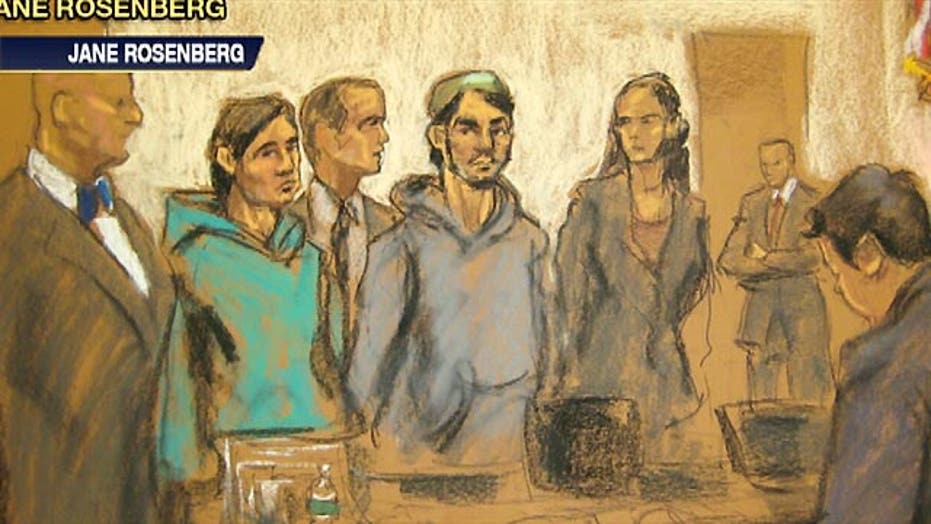 ISIS terror growing from within US

3 arrested in NYC for trying to join and plot with terror group as more Westerners are being recruited. How is ISIS trying to attract new members?

Three New York City residents -- two with Uzbekistan citizenship, and one a citizen of Kazakhstan -- plotted to travel to Syria to join ISIS militants and 'wage jihad,' the Justice Department announced on Wednesday.

One of the defendants also offered to kill the president of the United States if ordered to do so, the criminal complaint alleged.

Saidakhmetov and Juraboev appeared in federal court in Brooklyn late Wednesday. Both were held without bail on charges of attempt and conspiracy to provide material support to a terrorist organization. During the arraignment a federal prosecutor said both suspects confessed post-arrest that they wanted to travel to Syria to wage violent jihad.

Habibov appeared in federal court in Florida earlier Wednesday and was also held without bail.

Federal prosecutors say two of the men came to the attention of law enforcement last summer after one expressed online support for Islamic militants. Hilofatnews.com was an Uzbek-language website that called for readers to join the terror group, the complaint said. Authorities were able to link Juraboev to the post, the complaint said.

In August, federal agents met with Juraboev and he spoke of his hopes of fighting with the terror group in Iraq or Syria, the complaint said. He also allegedly mentioned to the agents that he hoped to harm President Obama because of  'Allah.'

"Juraboev added that he would also plant a bomb on Coney Island if he was ordered to do so by ISIS," the feds charge.

Saidakhmetov was arrested early Wednesday at John F. Kennedy International Airport as he tried to board a plane headed to Istanbul, authorities said. Juraboev had plane tickets for March 29 and Habibov helped fund Saidakhmetov's trip, the complaint said.

Authorities have a recorded conversation where Saidakhmetov expressed interest in joining the U.S. military, the complaint said. He allegedly said he could offer information to Islamic militants or open fire on American troops to kill as many as possible.

According to the complaint, Saidakhmetov was recorded in January saying, "I will just go and buy a machine gun, AK-47, go out and shoot all police."

Saidakhmetov allegedly said, "It is legal in America to carry a gun. We will go and purchase one handgun...then go and shoot one police officer...Boom...Then we will take his gun, bullets and a bulletproof vest...then we will do the same with a couple others. Then we will go to the FBI headquarters, kill the FBI people..."

They were officially charged with conspiracy to provide material support to the Islamic State of Iraq and the Levant (ISIL). If convicted, each defendant faces a maximum sentence of 15 years in prison.

The three are expected to appear in court today.

"We will vigorously prosecute those who attempt to travel to Syria to wage violent jihad on behalf of ISIL and those who support them," U.S. Attorney Loretta E. Lynch said in a statement. "Anyone who threatens our citizens and our allies, here or abroad, will face the full force of American justice."

Reuters reported that there are ISIS-related investigations in all 50 states.