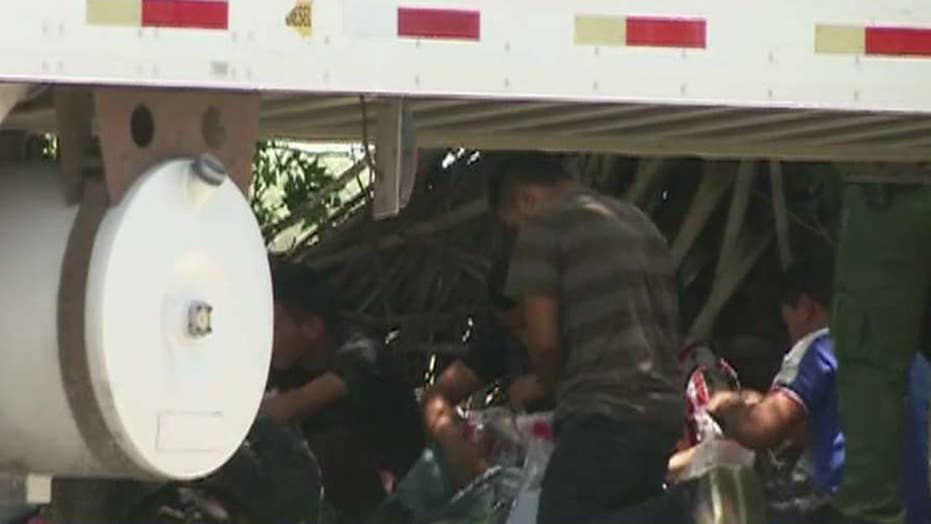 17 illegal immigrants were discovered inside a hot trailer

SIERRA BLANCA, Texas – Border Patrol agents have found 20 immigrants crammed into a locked semitrailer at a checkpoint in West Texas.

A Border Patrol spokesman said the immigrants from Mexico, El Salvador and Guatemala were in good condition after being found early Monday at the Interstate 10 checkpoint in Sierra Blanca, about 85 miles (136 kilometers) southwest of El Paso. The spokesman said they appeared to be in the U.S. illegally.

The driver, Irving Hernandez, has been booked into the El Paso County Jail in El Paso on a federal alien smuggling charge. No bond has been set. Jail records don't list an attorney for him.

The vehicle was found one day after a 16 immigrants were discovered locked in an 18-wheeler parked at a gas station in Edinburg, about 20 miles from the border with Mexico. The Border Patrol said the 16 comprised of eight people from El Salvador, six from Mexico and two from Romania. A man and woman, both Cuban nationals, were in charge of that truck, a Border Patrol spokesman said.

Three weeks ago, 10 people died after being found in a sweltering rig parked at a Walmart in San Antonio. Nearly 20 of those rescued from the rig were hospitalized in dire condition, many suffering from extreme dehydration and heatstroke.

The driver of that vehicle remains in federal custody, charged with illegally transporting immigrants for financial gain, resulting in death. Immigration officials said survivors estimated 100 people had been packed into the back of the 18-wheeler at one point. Officials said 39 people were inside when rescuers arrived, and the rest either escaped or hitched rides to their next destination.

Border apprehensions have risen each month since falling in April to a 17-year low.

Tractor-trailers emerged as a popular smuggling method in the early 1990s amid a surge in U.S. border enforcement in San Diego and El Paso, Texas, which were then the busiest corridors for illegal crossings. Before that, people paid small fees to mom-and-pop operators to get them across a largely unguarded border.

As crossing became exponentially more difficult after the 2001 terror strikes in the U.S., migrants were led through more dangerous terrain and paid thousands of dollars more.