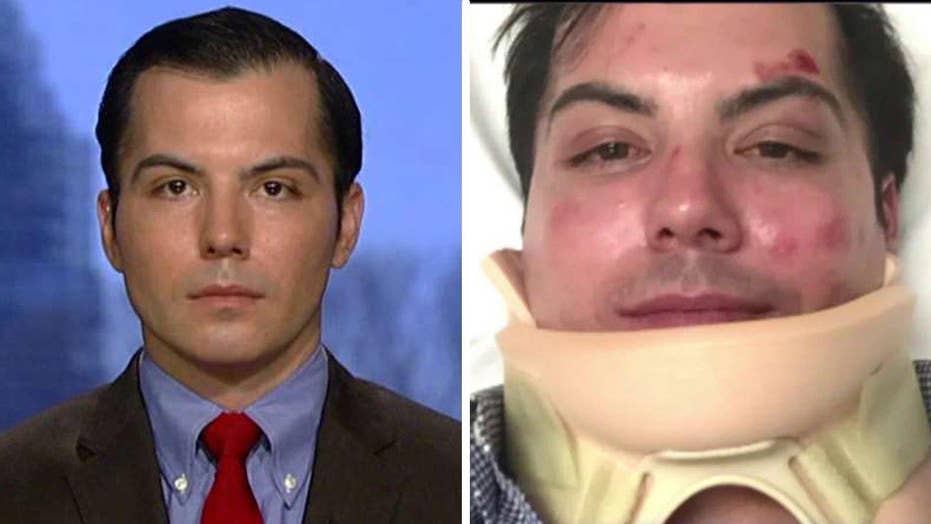 Marine veteran speaks out after being attacked at McDonald's

Two suspects have been arrested in the brutal beating of an Iraq War veteran outside a McDonald’s in Washington, D.C., FOX 5 reported Tuesday.

Authorities said a third suspect has been identified in the assault, though that person is not in custody, FOX 5 reported.

Marquez, 30, said the incident began when he was accosted by a group of teens while he was eating in the back corner of a McDonald’s restaurant.

“And they stopped at my table, and they went around my table in a group. Almost like confronting me,” Marquez told “Fox & Friends.” “And they were asking me about the movement, if I thought black lives matter. And I was ignoring them because they were actually just trying to intimidate me. It just seemed like they just wanted confrontation and I wasn’t going to play along with that. I just wanted to eat my food and leave. And then they started calling me a racist.”

When Marquez left the restaurant, several members of the group attacked him.

Surveillance video of the assault shows one individual walk up close behind Marquez and bash him in the back of the head, immediately knocking him to the sidewalk. Other members of the group appear to kick Marquez before someone tears his wallet from his pants.

“It was a hate crime,” said Marquez, who was treated for head trauma at George Washington University Hospital. “They targeted me because of my skin color.”

The thieves ended up stealing $400 in cash, three credit cards and a VA medical card from Marquez, who earned a Bronze Star during his time in the Marine Corps from 2003 to 2011. After he left the Marines, Marquez made an unsuccessful bid for a California congressional seat in 2014. He now studies at American University in Washington, D.C.

A GoFundMe campaign to raise money for Marquez has reached $34,277 in six days.