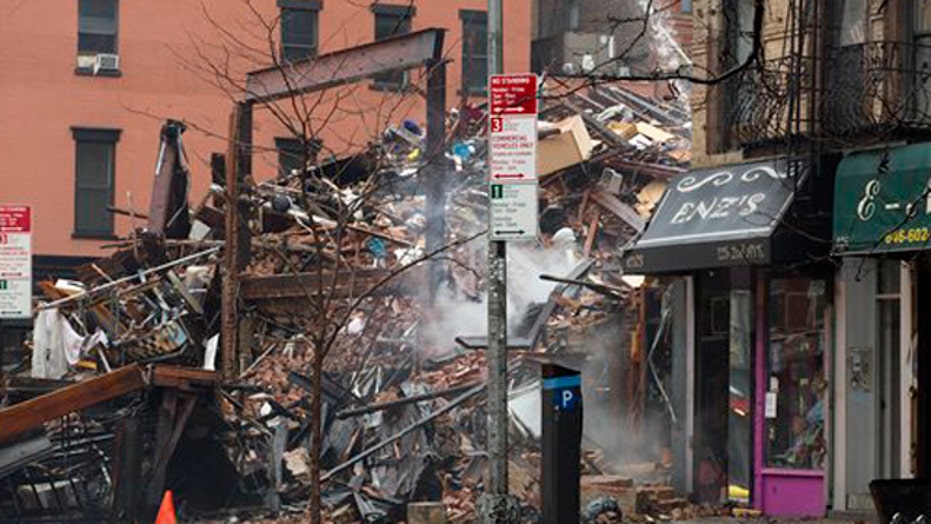 Firefighters on Friday used high-powered water towers to extinguish pockets of fire at the site of an apparent gas explosion in Manhattan's trendy East Village as authorities reported that two people were still unaccounted for.

Preliminary evidence suggested that a gas explosion amid plumbing and gas work inside the building was to blame. An hour before the blast, utility company inspectors decided the work being done there was faulty.

New York City firefighters work the scene of a large fire and a partial building collapse in the East Village neighborhood of New York on Thursday, March 26, 2015. Orange flames and black smoke are billowing from the facade and roof of the building near several New York University buildings. (AP Photo/Suzanne Mitchell) (AP)

The explosion caused the collapse of three five-story buildings and damage to a fourth, which was seven stories tall, the Fire Department of New York said.

On Friday, firefighters poured gallons of water over the wreckage, a giant wave of crumbled brick, twisted metal and splintered wood.

A light rain tamped down much of the acrid burning smell, but neighbors said the sirens and smell from the burning buildings kept them up throughout the night.

Friday morning was the first chance for many to see the damage up close.

Naomi Machado, who has lived in the East Village neighborhood for 35 years, was in tears as she glanced at the rubble on her way to work.

"I'm totally devastated," she said. "For my neighbors, for our neighborhood. We all look out for one another."

Naho Ikechia, 36, was shocked by the scene -- and grateful the damage wasn't even greater.

She grieved for those who lived in the buildings. "All their memories there, destroyed. It's so sad."

Initial evidence pointed to a gas explosion. A plumber was doing work connected to a gas service upgrade in one of the now-destroyed buildings, and inspectors for utility company Con Edison had been there earlier Thursday, company President Craig Ivey said. But the work failed the inspection, partly because a space for the new meters wasn't big enough, Con Ed said.

A woman listed in city records as the building's managing agent didn't immediately respond to phone and email messages Friday. A contractor and engineers involved in work at the building that began last year declined to comment or didn't respond to calls.

On Thursday night, Tyler Figueroa said his 23-year-old brother, Nicholas, had disappeared after going on a date at an East Village sushi restaurant, whose facade was still intact Friday.

Figueroa said that the couple was paying for their meal when the blast occurred and that his date, who is in the hospital, remembers only stumbling outside before losing consciousness.

"I just pray my brother shows up," he said. "We just hope my brother comes back."

Diners ran out of their shoes and bystanders helped one another escape the blast, which sent flames shooting into the air, witnesses said. Passers-by were hit by debris and flying glass, and bloodied victims were aided as they sat on sidewalks and lay on the ground.

The blast happened a little over a year after a gas explosion in a building in East Harlem killed eight people and injured about 50. A National Transportation Safety Board report released last week said a leak reported just before the blast may have come from a 3-year-old section of plastic pipe rather than a 127-year-old cast-iron segment that came under scrutiny immediately afterward.

Mayor Bill de Blasio noted that no one had reported a gas leak before Thursday's blast. Con Edison said it had surveyed the gas mains on the block Wednesday and found no leaks.

Bystander Blake Farber, who lives around the corner, said he'd been walking by the building and smelled gas seconds before the big blast.

The explosion was so forceful it blew the door off a cafe across an avenue and left piles of rubble on the sidewalk. One witness said his son helped to lift debris off a man so he could escape the restaurant where they had been eating.