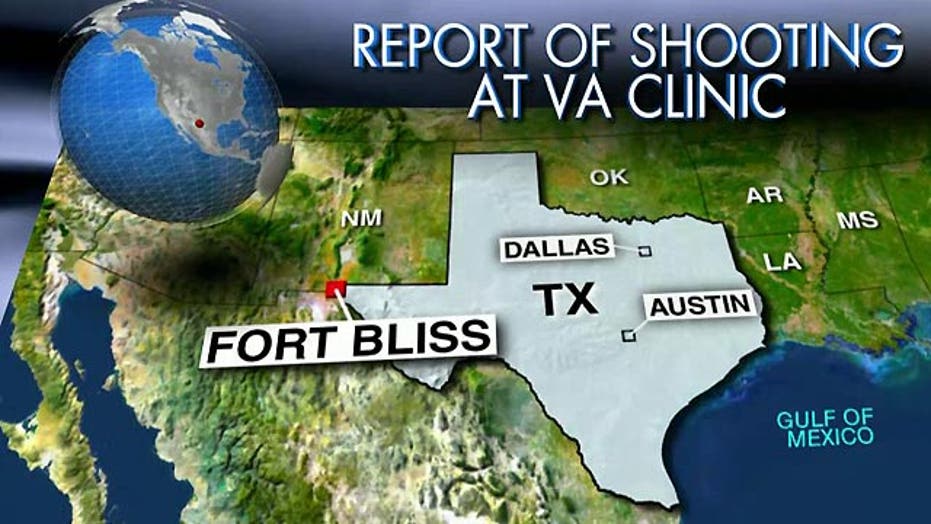 A shooting at a west Texas veterans' clinic on Tuesday left two people dead, including the gunman, military authorities said.

The shooting was reported shortly after 3 p.m. local time at the El Paso VA Health Care System clinic, which is part of Fort Bliss in El Paso, Texas. Maj. Gen. Stephen M. Twitty confirmed the details at a news conference Tuesday night, but declined to provide further information -- such as a possible motive, the relationship between the male shooter and the victim, or how the shooter died -- and did not take questions.

"Everything is under control and there is no immediate threat to Fort Bliss or the neighboring community," said Twitty, commanding officer of Fort Bliss.

The El Paso Times, citing the office of Rep. Beto O'Rourke, D-Texas, said a doctor at the fort's veterans' hospital was shot and that the shooter apparently shot and killed himself. A message left for the congressman's office by FoxNews.com was not immediately returned, and a spokesman for Fort Bliss said he was unable to confirm or deny the report.

The FBI, which is leading the investigation, has hundreds of potential witnesses, many of whom were patients or would-be patients at the clinic, said Douglas Lindquist, special agent in charge of the FBI El Paso office.

"Those people were here seeking medical assistance, so we understand the difficulties that this situation presents to them and we're trying to expeditiously get through those hundreds of witnesses to find out details about this incident," Lindquist said.

The VA clinic came under scrutiny last year after a federal audit showed it had some of the nation's longest wait times for veterans' trying to see a doctor for the first time. A survey of hundreds of West Texas veterans last year found that they waited an average of more than two months to see a Veterans Affairs mental health professional and even longer to see a physician.

O'Rourke commissioned that survey of more than 690 veterans living in El Paso County. O'Rourke also was active in a congressional probe into long waiting times in the VA health care system.

In a statement issued by his office Tuesday, the El Paso Democrat said his "thoughts and prayers are with the men and women at the El Paso VA clinic."

The VA said in a statement that it "is deeply saddened by the tragic situation that has occurred in El Paso, and we are actively working with our partners at Fort Bliss to investigate this matter."

"The safety and continued care of our veterans and the staff will be our focus throughout this situation," the agency said.