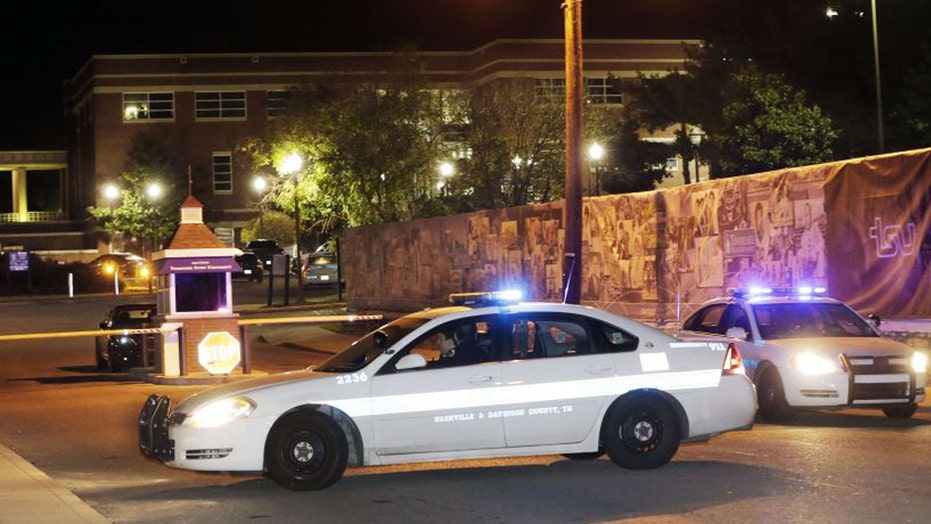 One dead, three hurt in shooting at Tennessee college

One man was killed and three women were wounded in a shooting late Thursday on the campus of Tennessee State University, police said.

Witnesses said an argument broke out over a dice game that initially led to a fistfight when “suddenly shots were fired,” Metro Nashville Police spokesman Don Aaron said.

The 19-year-old who died in the shooting was not enrolled at the school, according to police. It wasn’t clear whether the shooter, who fled the scene, was a student, though WZTV reported police don’t believe the gunman was enrolled at the university.

Aaron said the shooting occurred in a courtyard at around 10:50 p.m.

Three female students, who Aaron said were passers-by, were struck during the shooting. One was grazed and didn’t require any medical attention, while two others were taken to Vanderbilt University Medical Center with injuries. One had been released by Friday morning, while the other was in stable condition and was expected to make a full recovery, Aaron said.

Tennessee State University said in a statement Friday morning that no other injuries were reported and students were escorted back to their residence halls safely. The campus was placed on lockdown.

"This was an isolated shooting incident in a courtyard," Aaron said. "There were never, we believe, any other students in danger in dormitories or elsewhere on campus."

Several students used their phones to record the fight. Police have obtained some video, but encouraged other students who scattered when the shooting began to come forward with further recordings and information.

"The person who fired those shots put innocent persons in extreme danger in this isolated incident," Aaron said. "We're hoping that TSU students that have this video, have this knowledge, understand that this person put them in danger tonight, and will report what they know."

Police did not yet have a description of the suspect, and could not say whether an exchange of gunfire occurred until the evidence is analyzed. Investigators expected to complete their crime scene investigation Friday morning and allow the campus to return to normal operations. They planned to release the identity of the man who died later in the day.

The incident comes just over a week after three people were wounded by gunfire at an off-campus party across the street from the college.

Tennessee State University is a historically black college located near the Cumberland River west of downtown Nashville. The university has more than 9,000 students and about 400 full-time faculty members, according to its website.