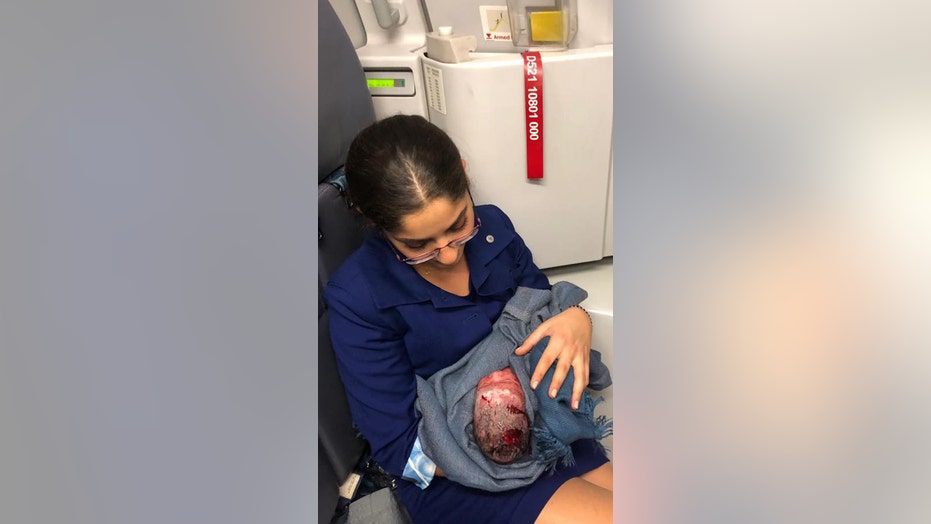 A Middle East Airlines-Air Liban (MEA) passenger recently gave birth during a flight traveling between Qatar and Lebanon, safely delivering a baby daughter with the help of cabin crew.

On July 27, the unnamed female passenger went into labor soon after Beirut-bound flight ME435 took off, The Independent reports, and gave birth “just after entering Iraqi airspace.”

Reports from local media claim the woman gave birth in the plane’s restroom, per the outlet. A spokesperson for the carrier has since confirmed that flight crew facilitated the delivery, and that the plane was quickly diverted to Kuwait.

A baby girl, pictured, was born during a Middle East Airlines-Air Liban flight from Qatar to Beirut on July 27. (Lebanese Plane Spotters)

“Announcements were made to check if there was any doctor on board to assist with the delivery, but no doctors were on board that flight," Rima Mikaoui, MEA director of public relations, told USA Today.

"MEA Cabin Crew handled the situation (they assisted the lady with the delivery) and all went well, the baby was delivered on board and was well taken care of," Mikaoui continued. "The flight was diverted to Kuwait where the mother and the baby born disembarked to receive medical attention; the flight resumed its operation to Beirut."

A spokesperson for the carrier has since confirmed that flight crew facilitated the delivery, and that the plane was quickly diverted to Kuwait. (iStock)

Aviation Facebook group Lebanese Plane Spotters also commented on the news, praising the “professional and well trained” crew members for their actions and sharing a picture of the newborn on the aircraft.

“The professional and well-trained crew delivered the women according to procedures and took good care of the baby until the plane landed. It is as we always say, the crew is onboard for your safety at first and comfort,” reps for the aviation enthusiasts wrote. “Hats off to MEA’s ME435 crew for the great job they have done and for the rigorous training they receive at MEA’s training center.”

The post has since been liked and shared thousands of times online, with commenters applauding the flight crew and calling for the carrier to award the infant girl free travel for life.

Reps for the carrier did not immediately return Fox News’ request for comment for additional information.