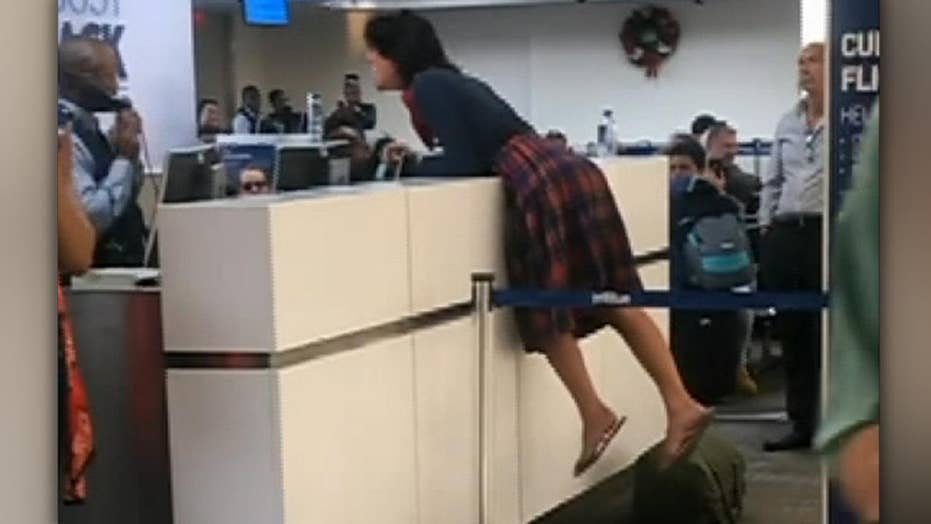 Woman has meltdown at Florida airport after her flight was canceled

Raw video: Woman yells at Jet Blue worker at Fort Lauderdale airport after her flight was canceled due to computer failure.

A woman was arrested at the Fort-Lauderdale-Hollywood International Airport Sunday after screaming at and threatening a JetBlue crew member at the gate.

Video of the incident went viral on Instagram after being shared by Dre London, who was at the airport during the time of the arrest.

The unnamed passenger is standing at a JetBlue counter near the gate, shouting and jumping up and down as she verbally assaults the employee.

She also screams that she has a gun and is homeless. Moments later, she grabs her bag and walks off.

In a second video, the woman is seen sitting on the ground being detained by several law enforcement officials.

A spokesperson for JetBlue told Fox News the woman was denied boarding from her flight for being drunk.

“On January 6, crewmembers at Fort Lauderdale-Hollywood International Airport requested assistance from local law enforcement was requested after a customer was denied boarding for indications of intoxication and became disruptive,” the spokesperson said.

The airport did not return Fox News’ request for comment.