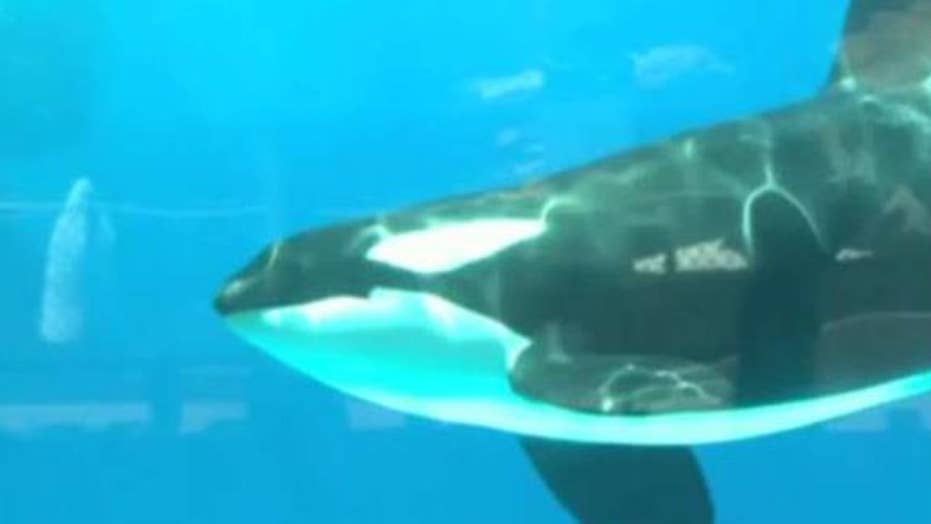 Killer whale show to be phased out over next three years

As SeaWorld parks phase out their real-life animal encounters, the entertainment giant is looking to virtual reality to boost guest satisfaction in a different way.

This summer, the Orlando theme park will debut a new virtual reality experience on its popular Kraken coaster, handing out VR goggles to give riders the experience of racing through a fully submersed underwater scene.

“We see great potential for [virtual reality] use across the parks,” SeaWorld CEO Joel Manby said in a call with investors on Feb. 28.

“We're also looking to have a version of virtual reality for our animals where guests can see them live and other things you typically can't see as a human today except through virtual reality."

But as a new technology, virtual reality is unlikely to offer the full excitement of seeing a live animal in person-- or the thrill of being able to fully enjoy a traditional thrill ride like a roller coaster, say some theme park experts.

"Parks should be careful not to be too liberal with their VR experiences, it should be used to enhance-- not replace-- traditional attractions," Ricky Brigante of Inside the Magic told Fox News.

While Brigante believes SeaWorld Orlando has some of the best rides in the business, he cautioned that experiences like the Turtle Trek-- a 3D theater experience about saving sea turtles-- lean too heavily on virtual reality and the in-your-face pro-conservation message takes away from the entertainment value. Plus, says the theme park insider, it's very hard to replicate the experience of meeting--and getting splashed by-- a real animal.

"I personally get where animal activists are coming from but I've met many amazing trainers and caretakers [at SeaWorld] who put the animals' needs first always," says Brigante.

"When I think about going to SeaWorld, I want that visceral experience of seeing a real animal. VR technology just can't replicate that quite yet."

According to the Orlando Business Journal, SeaWorld's VR investment  is part of the theme park giant's plan to revamp its offerings. SeaWorld will use advanced technology termed “Deep See” and will incorporate virtual reality headsets as a way to transport guests into areas of the world they’d never be able to visit otherwise.

SeaWorld, which is looking to bring in new customers and win back detractors, may see VR as a relatively "low-risk" investment to upgrade additional rides.

Like Brigante, however, Lewison warns the virtual reality world has its limitations.

"On the negative side, however, the VR headsets do significantly slow down operations," says Lewison. "Goggles have to be cleaned and straps need to be secured...In addition, some guests ride rollercoasters so that they can feel the wind in their face and see the park around them. I’ve heard some enthusiasts say that staring at game screens is something that one can do at home."

In January, SeaWorld San Diego announced plans to enhance its non-animal attractions with a roller coaster dubbed the Electric Eel. That ride, which will send riders back and forth at speeds of up to 60 miles per hour, will reach a height of 150 feet. It will also showcase a live eel exhibit in the waiting area.

In addition to more rides, if SeaWorld is able to use the VR experience as something guests can only find within parks, however, Brigante sees great educational and entertainment potential.

"After handing out the goggles, SeaWorld could leverage the idea of getting all dressed up into scuba gear to give the audience that feeling of 'hey, we’re about to go on this deep sea dive, time to suit up.'"

The new attractions come as SeaWorld attempts to move on from its controversial orca-breeding program. Last May, the park partnered with marine biologist and wildlife artist Guy Harvey in an attempt to educate visitors on worldwide shark preservation attempts.

The park’s new Mako coaster, named after the ocean’s fastest shark, served as the main point of that shark conservations education.