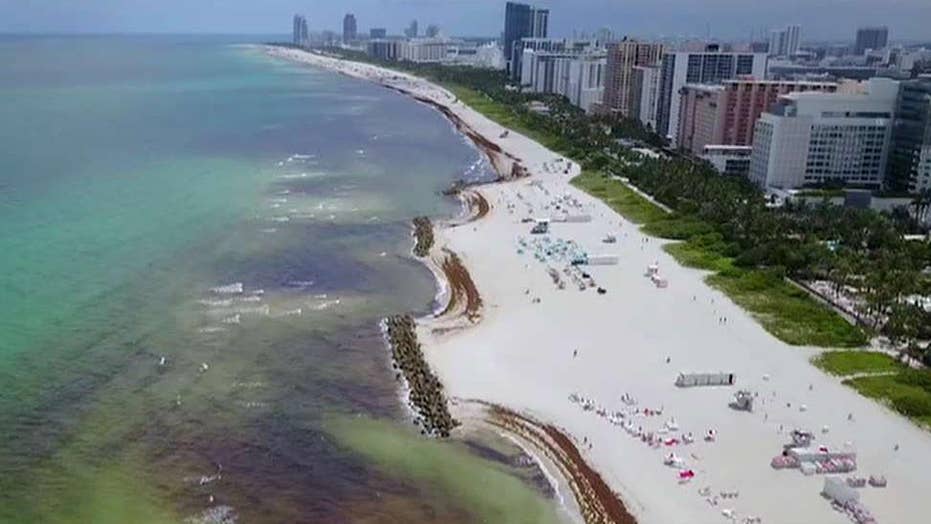 MIAMI BEACH -- Christy Ayers, her husband, Tom, and their two children came to Miami Beach for her 40th birthday. But when they stepped out to this world-famous beach, the celebrating immediately stopped, right on the sand.

"We were shocked when we walked onto the beach, we had no idea, and it's just full of weeds,” Christy Ayers said. “We tried to go swimming in it and we were swimming in the weeds. Not fun at all."

Up and down the beach, this summer has seen an unprecedented amount of seaweed, or, sargassum.

Some days, it’s stacked up where the surf meets the sand and goes down the beach as far as you can see.

SOUTH FLORIDA, IN EFFORT TO SAVE TOURISM INDUSTRY, MAY SPEND MILLIONS TO REMOVE SEAWEED INVADING BEACHES

As did Hazel Hazlett, visiting from Madrid.

“It’s gross and it smells bad,” she said.

She’s right. When it dries out, it rots, smelling like rotten eggs.

Since Miami-Dade’s economy depends on the 16 million tourists who spend nearly $30 billion each year, Miami-Dade County is now spending hundreds of thousands of dollars to remove it -- a three-month seaweed removal plan.

"You have an expectation it's going to be pristine,” said Miami Beach Mayor Dan Gelber.

And it’s not just a Florida problem. The sargassum blanket is enormous, stretching 5,000 miles through the Caribbean and South America.

The Mexican navy has mobilized to clean up the seaweed and the state Quintana Roo, where Cancun and Cozumel are, has declared a state of emergency, which Barbados also did.

Florida International University’s Stephen Leatherman, also known as “Dr. Beach,” releases a list of the best beaches in the country each year.

He said Miami Beach is definitely going to be losing some points and explains that the blame for it all goes to Brazil, where the Amazon forest continues to be deforested and replaced with agriculture.

That leads to more and more fertilizer being used and rain ultimately drains it into the river and out to sea.

"We have a lot of nutrients coming down the Amazon River,” he said. “Because of the deforestation, that's causing the sargassum sea to bloom, and it's coming around the Caribbean, and then the gulf stream brings it here, wind brings it on shore and now we have this mess."

He said at least it’s not harmful.

"As undesirable and unsightly as all of the seaweed is,” he said, “the one positive thing about it is, you cannot get sick from it, it's harmless to humans, but the beach experience, just stinks.”

And rising sea temperatures only help the bloom.

Tourism beach communities who depend on tourists are clearly alarmed, calling it a “crisis.”

And scientists expect it’s all a “new normal,” which for beach-goers, means an often rotten day at the beach.