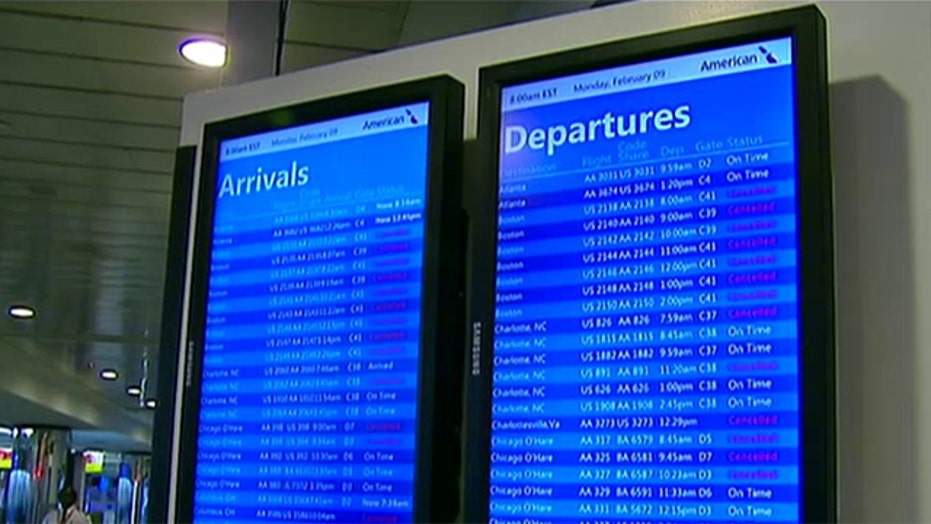 It's winter and --yeah we get it: It snows.  But a string of storms hitting the U.S. has kept airlines on their toes -- preemptively canceling thousands of flights and scrambling to reschedule passengers.

Now air travelers face new travel headaches from a major Northeast winter storm that has canceled more than 1,800 flights into or out of the U.S. for Monday, according to flight tracking service, FlightAware.

This follows previous disruptions, including the winter storm that pounded the Northeast from Jan. 26 to Jan. 28 and prompted airlines to ground more than 8,100 flights across the nation --3,200 of which were canceled a day before even a single snowflake fell along the East Coast.

Susette Kirkpatrick, a New York City-based consultant who makes weekly trips to Dallas, was stuck on the tarmac earlier this month for three hours, asked to deplane, then re-boarded several hours later -- only to face worsening blizzard conditions.

“It’s almost a joke at this point,” Kirkpatrick, almost nine hours into her travel ordeal, told FoxNews.com. “I was just trying to make it to work, but I could have flown to Siberia and back.”

But Kirkpatrick was one of the lucky fliers out of the New York Metro area, eventually landing in Dallas later that night. LaGuardia Airport had 325 cancellations, while Newark-Liberty faced more than 560 cancellations.

So is this the winter of our discontent?  Almost. According to FlightAware, this has been a rough winter in terms of cancellations. From Jan. 1 to Feb. 9 there have been 28,340 canceled flights. This compares to 47,710 in the same period last year -- but keep in mind that more flights were grounded last winter than at any time since 1987, when the Department of Transportation first started collecting data.

American Airlines spokeswoman Andrea Huguely says that flight cancellations are an indication that airlines are handling snow events more effectively -- and getting ahead of the snow to allow for faster recovery.

“Our goal is to try not to impact the customer’s travel and when we need to do it, we want to do it as early as possible,” she said.  “Even 10 years ago, it was an old-fashioned phone call.  Today there are many ways to rebook a flight.”

Airlines can now sort out the puzzle of booking passengers using software that quickly matches passengers with alternate flights. Instead of customer service, there are app and social media tools where people can turn to find out about travel alerts and change fee waivers.

Carriers also are employing strategies to position airplanes and employees before storms hit so flights can resume quickly -- as soon as runways clear.

Huguely said that during the January storm, American moved aircraft to Chicago out of New York so planes didn't have to be de-iced.

The Wall Street Journal says that stiffer airline regulations limiting the time passengers spend on the tarmac, as well as stronger rules on pilot rest, have been contributing to preemptive flight cancellations and are prompting these changes. So is the bottom line: Aviation analysis firm MasFlight estimated that the 7,800 flight cancellations in major New York airports caused by the Northeast snowstorm in January 2015 -- also affecting Philadelphia, Boston, Chicago, and Washington, DC -- would cost airlines $10 million.

Still, customers are put out by these cancellations and getting back home can be a lot of work. Travel experts say that those facing a called-off flight shouldn’t just let the airline automatically rebook.  First, check out FlightStats.com, which shows delayed and canceled flights all across the country. There may be a different itinerary that’s a better fit for your schedule. Websites such as “FlightAware” offer status information for multiple airlines.

But airlines say they won’t cancel flights unless it is absolutely necessary.

“We schedule cancellations when we believe we cannot safely operate,” Huguely says.